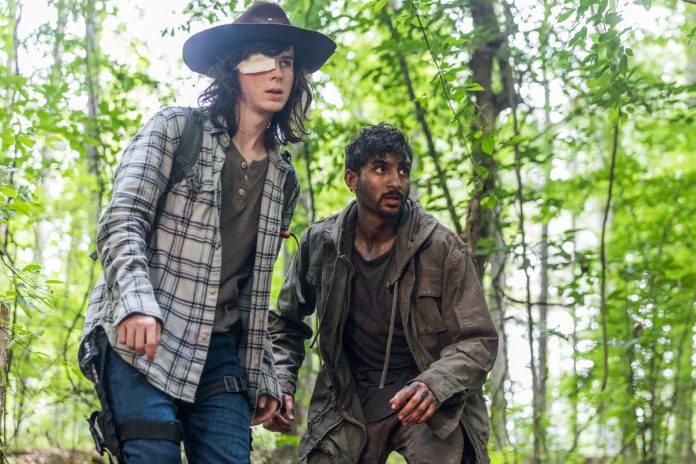 Each week, we comb through the guts of The Walking Dead, much like a horde of hungry walkers, to bring you the episode’s best moments, surprises, and other post-apocalyptic curiosities. This week: Rick talks too much, Rosita shoots a rocket, and Daryl runs a red light.

Best use for a broken microwave: Turn it into a mailbox. Duh.

Oddest moment: Just when you thought the Garbage Pail Kids couldn’t get any weirder, they start hanging out just as naked as AMC would allow. Aren’t they worried about jagged metal scrap?

Most likely to die soon: Henry, because whenever a kid starts getting too close to Carol, their blood must spill.

Best replacement: We were very happy to see Jerry has a new axe. We were not, however, happy to see him a bit shellshocked.

Worst bargaining chip: Gregory finally calls Maggie by her preferred nickname as he’s being forced into the makeshift prison, after 20 minutes of calling her “Margaret” (and previously calling her names that aren’t hers more times than we can count). Sorry, buddy, not gonna work.

Most deserved: Also, hooray for Maggie for finally coming to her senses and locking Gregory up for treason.

Confusing continuity: Is the drive to the Sanctuary that long? Because when Michonne and Rosita embarked on their impromptu journey, Michonne was driving. In the next scene, Rosita is behind the wheel.

Best deus ex machina: Of course Daryl and Tara just happened to be where they could conveniently smash into the Fat Lady and destroy it. Just like Daryl and Rick just happened to be able to intercept the gun-toting Saviors that escaped from Carol and Ezekiel two episodes ago. (That said, it was still a pretty epic moment.)

Best callback: This isn’t the first time Rick’s been locked in a container with “A” written on it. Remember Terminus?

Farewell: On last night’s Talking Dead, it was announced that Lennie James will be leaving the show at the end of this season and will continue playing Morgan on the spinoff prequel Fear the Walking Dead. So if you’re a fan of Morgan and don’t want to say goodbye yet, better get cracking on watching the first three seasons of Fear.

Best line: “Talks too much.” —Jadis, about Rick

Most disturbing image: Unlike the moment below, which was goofy action movie fodder, watching Siddiq ram a walker into a tree and seeing its head literally disintegrate into bloody confetti was a bit much.

Episode MVP: Carl, for going against his dad’s wishes and recruiting Siddiq to the Sanctuary. Because, you know, the whole point of the war was to build a nice community, so maybe finding good people to add to it isn’t a terrible idea?