In mid-2011, a little more than a year into his first term as Atlanta’s mayor, Kasim Reed read about New York’s “Taxi of Tomorrow” competition. In it, the city’s powerful taxi commission selected the Nissan NV200 as the standard vehicle to be used by every company operating in the five boroughs.

Reed became determined to reform his own city’s cab system. For years the top complaint by tourists and conventioneers, as collected by the Atlanta Convention and Visitors Bureau, had been about crummy, overpriced taxis. Out-of-towners grumbled that our cabs were old, dirty, even smelly. Drivers were unprofessional, didn’t know their way around, and often overcharged. Many cabs didn’t show up on time—if they showed up at all.

Then his plans hit reality. Most Atlanta cab companies don’t have fleets. As many as three quarters of cabs are owned not by the companies but by the drivers, independent contractors whose profit margins don’t leave much room for upkeep. Three-quarters of taxi businesses in the city don’t even operate dispatch centers. Instead, drivers rely on taxi stands to pick up fares.

The city also realized that if it pushed too hard for new regulations, taxi companies could simply opt out of the entire system. That would mean they wouldn’t need to comply with licensing requirements and fare restrictions or buy medallions, the permit that allows a vehicle to operate as a taxi within the city limits. The only privileges they’d be giving up would be the free use of taxi stands, the ability to shuttle fares from the airport, and the right to pick up passengers hailing them from the curb—a rarity in Atlanta. Apart from a list of “passenger rights” posted in every cab—a clean and safe vehicle, air-conditioning or heat upon request, and an “odor-neutral environment”—the bulk of the mayor’s initiatives were shelved.

Enter Uber and Lyft. The rideshare apps arrived in Atlanta in 2012 and 2013, respectively, and have, in essence, provided Reed with the taxi fleet he was imagining. The cars are clean, and the drivers are courteous, show up when they’re supposed to, and (usually) don’t get lost.

There’s only one problem: The city’s actual taxis are still around. Just take a look at the holding lot on the western edge of the Atlanta airport. Throughout any given day, there are 250 to 300 cabs waiting their turn to pick up a fare. With so much supply and limited demand, a driver can wait up to three hours. So if a cab arrives at the airport at 7 a.m. on a busy travel day and returns immediately after dropping off passengers, the driver will likely collect only two fares over an eight-hour period—three, tops.

Consider the fact that there are 1,550 licensed taxis in the city and that around 300 of those that are on-duty typically sit idle in the airport parking lot. It becomes easier to understand why Atlanta officials are feeling pressure to bring Uber and Lyft to the people and, specifically, to the airport.

But there’s a sticking point: Before he was fired in May, Hartsfield-Jackson general manager Miguel Southwell proposed that Uber and Lyft drivers submit to fingerprinting and FBI background checks before they can operate out of the airport. Reed subsequently said he supports fingerprinting as a security measure, partly because it’s not fair to make only cab drivers submit to the process.

That would be a deal-breaker for Uber, says the company’s spokesman Bill Gibbons, because not enough of Uber’s mostly part-time drivers are willing to spend the time and effort to go through the airport background check. Uber and Lyft ceased operations in Austin in May over a similar citywide mandate.

Many of the country’s busiest airports have allowed Uber to perform its own background checks, including Los Angeles, Denver, Chicago’s O’Hare, and Reagan and Dulles in Washington, D.C.

Hartsfield-Jackson also has proposed that rideshare cars bear permanent decals. And it aims to prohibit drivers from parking on airport property to await fares, instead providing rideshare companies with a mere six curbside spaces from which to pick up passengers at the domestic terminal.

The city council has been busy studying agreements Uber has reached with other major airports and talking to security experts to see if Uber’s own background checks are sufficient.

Not only do Uber and its rideshare competitors have novelty and popularity on their side in this showdown, they also are aided by years of decay and indifference in the local taxi industry. In Atlanta most cab companies act mainly as rent collectors: They lease the medallions to drivers for a few hundreds dollars a month, buy insurance coverage, and in some cases dispatch calls. Everything else, including vehicle maintenance, is typically the responsibility of the drivers, who, since they’re not employees, can refuse to accept a fare offered by the dispatcher.

Uber drivers also can refuse fares. The difference is that Uber customers know immediately if a fare has been accepted; taxi customers might not discover they don’t have a ride until it’s too late to catch their flight.

“That’s a big concern,” acknowledges Rick Hewatt, president of Atlanta Checker Cab. To keep up with Uber and Lyft, his company uses an app called App-a-Cab that enables customers to book a ride and track its approach. In contrast to most of its competitors, Checker Cab has an on-site maintenance shop and a fleet of 140 company-owned vehicles that it leases to drivers. All of its taxis have credit card scanners and backseat TVs.

Still, he says, Checker Cab didn’t make a profit last year; he estimates that a quarter of its business was siphoned off by the rideshare firms. Hewatt says he’s eager to compete with Uber, as long as it’s a fair fight, which he believes should include the same fingerprinting and background check required for his drivers. If the playing field isn’t leveled, he says he might consider giving up Checker Cab’s status as a regulated taxi company and operate as an Uber-style rideshare provider.

“This is the fight of my career,” he says. “Why should we follow the rules if our competitors don’t?”

300
Typical number of cabs at airport waiting on fares 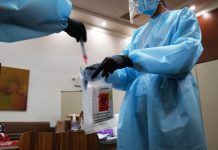