Americans tend to usher out old traumas for fresh ones, so having a documentary about the 2018 shooting at Marjory Stoneman Douglas High School roll into town during a pandemic and a summer of social upheaval over police violence and racism is both a blessing and a curse.

Us Kids, directed by Kim A. Snyder, makes a stop on its nine-city tour at the Plaza Theatre Drive-In at 8:30 p.m. Thursday, August 27. Samantha Fuentes and Alex Dworet, who both survived the Parkland, Florida, shooting, will be at the Plaza for a Q&A, along with a virtual appearance from Snyder. Tonight’s audience for Us Kids will undoubtedly find that socially distanced movie-going in the time of COVID-19 has its advantages. One of them is the ability to be with your emotions inside the protective shell of your own car.

The film follows a core group of Parkland shooting survivors—Emma Gonzalez, Samantha Fuentes, Alex Dworet, David Hogg, and Cameron Kasky—as well as young Black activists like Milwaukee’s Bria Smith, whose own community had been ravaged by gun violence, as they plan the summer March For Our Lives and Road to Change bus tour across America to inspire an end to gun violence and to motivate youth voter turnout in 2018.

Their caravan even comes to Atlanta (introduced, strangely, with a William Christenberry-evocative shot of wooden shacks and lonely country roads). It was a pivotal stop, Snyder tells Atlanta magazine, on the final leg of the Road to Change, which included a visit to the National Center for Civil and Human Rights. Snyder includes archival footage of high school activists in Birmingham during the 1960s civil rights movement to emphasize the history of youth-driven protest. Atlanta was decisive, says Snyder. “I think they could begin to step outside themselves and almost see themselves in historic hindsight.”

The tour stopped twice, in Atlanta and in Roswell, where future Georgia Congresswoman Lucy McBath, whose own son was a victim of gun violence, was in the crowd.

Milwaukee activist Bria Smith was especially affected by the Atlanta stop, says Snyder. “For Bria, there was a deep reckoning with her African American past, and her voice grew [stronger] each day as she was exposed to the footsteps of MLK (having met his son backstage in Atlanta) and the legacy in Atlanta.”

More than just an archeology of a protest movement, Us Kids is a deeply troubling look at something we tend to gloss over in our onward-and-upward culture: pain that doesn’t go away, that isn’t marched out, talked out, or moved past. It’s there in the way Fuentes vomits when she tries to talk about Parkland in front of a crowd. It’s there in Kasky’s disconcerting 1,000-yard stare. It’s there in the hoodie Dworet wears in the baking Florida heat to hide the scar from a bullet wound from the Parkland shooter, who killed his brother, Nick. PTSD isn’t just experienced by battle-scarred veterans and war refugees. It’s a cottage industry in America.

Snyder documents the ugliness of the post-Parkland events, when TV pundits called teenagers like Hogg “crisis actors” and death threats against the activists were common. But Synder isn’t after a Michael Moore wallow in performative outrage. She also shows Hogg and Kasky leaving their Road to Change bus to talk to Gadsden flag- and gun-toting protestors. An adrenaline hit of hope is clearly more important to Snyder than fanning flames. 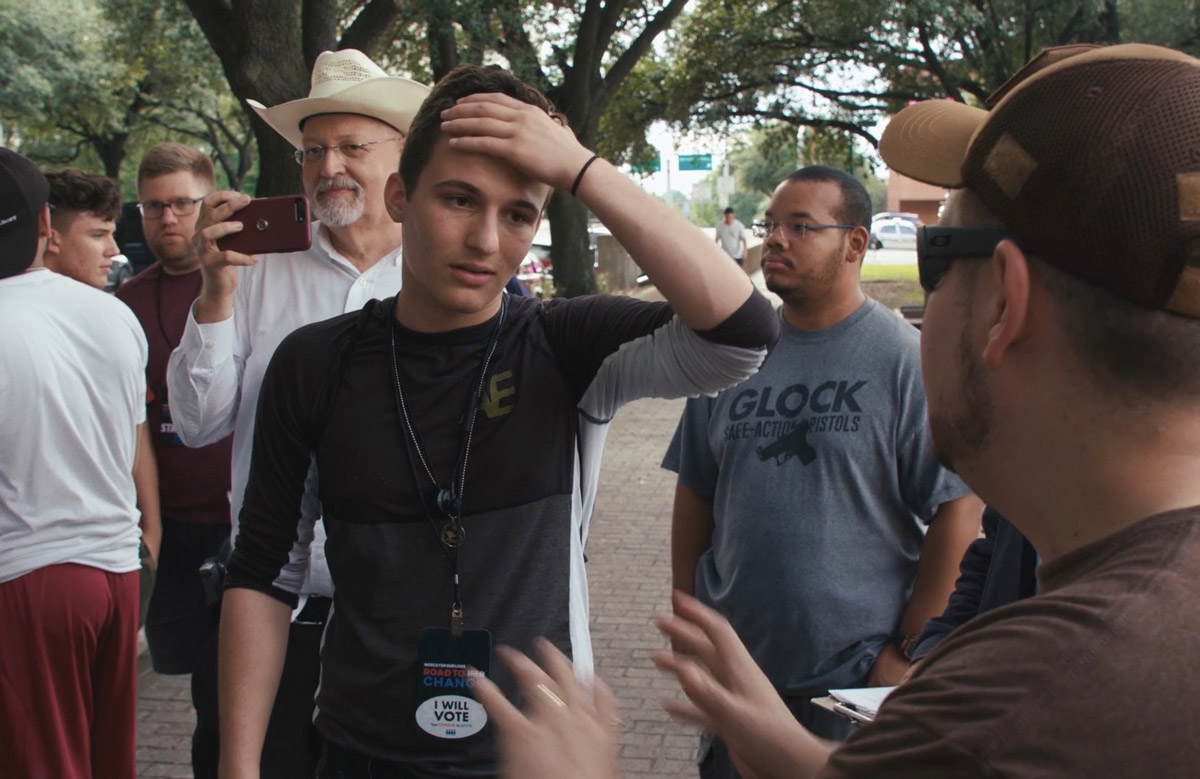 Snyder, a Peabody Award-winner, has made trauma a component of much of her filmmaking life, including her work as an associate producer on the 1994 Oscar-winning short film Trevor, about a suicidal gay teenager. And Snyder is no stranger to trauma’s personal toll. Her 2000 film I Remember Me documented an alienating experience in her thirties, coping with Chronic Fatigue Syndrome. “Albeit traumatizing in very different ways, I think [it] left me with a sensitivity to chronic grief, hardship, and the kind of existential questioning that comes from years of unchosen solitude,” she says. She went on to make several films about school shootings, including 2016’s Newtown and 2018’s School Shooting: Notes from Dunblane.

Much of the film’s heart and soul belongs to survivor Fuentes, an artsy, vaping renegade with blue hair and a wicked sense of humor, who is wracked with survivor’s guilt. “I always wonder why it wasn’t me” Fuentes says about the loss of her friend Nick Dworet, Alex Dworet’s brother. When she’s not dancing or joking, Fuentes expresses lingering panic that some unseen shooter waits in every crowd.

The movie is a reckoning with the many pivotal American movements for change that were forged by kids, whether in the civil rights era or during the Vietnam protest movement. It’s also a reminder that America has a lot to fix.

Snyder thinks that Us Kids is more relevant than ever in the context of the COVID-19 pandemic and the Black Lives Matter movement—a kind of generational understanding of systemic American violence.

“The kids keenly understood from back when the March For Our Lives movement sparked, the intersectionality between racism and guns, between so many issues that cannot be isolated from one another,” says Snyder. “With gun sales skyrocketing since the pandemic began, suicide and domestic violence on the rise, and brutality to BIPOC communities by way of guns, if you didn’t think gun violence was a priority issue before, it is a very hard issue to ignore as we face these challenging times. The gun violence problem in this country continues to be a chronic public health crisis within a now acutely cataclysmic public health crisis.”