Home News & Opinion Politics “Wake Up Atlanta” How Kavi Vu and Phi Nguyen use Facebook to...

If you’re an Atlantan who logs onto Facebook, you’ve likely come across a friend or connection sharing this post of helpful (and colorful) constitutional amendment and referenda breakdowns pertaining to the impending midterm election (particularly helpful since the language of these proposals requires approximately two decades of formal education to fully comprehend). For that, you can thank Kavi Vu and Phi Nguyen, the duo behind Wake Up Atlanta.

They founded the web series last year as a way to inspire Asian Americans in Atlanta to become more civically educated and engaged, with an aim of increasing Asian American voter turnout and informing the community about important issues and policies through fun videos and on-the-ground interviews. By day, Vu is a freelance videographer and content creator, while Nguyen works as the litigation director of the nonprofit Asian Americans Advancing Justice Atlanta (also Wake Up Atlanta’s fiscal agent). Now, with Vu recently awarded as one of the 2019 class of Civic Innovation Fellows from the Center for Civic Innovation Atlanta, they’ve got even more resources to put their ideas into action.

Vu and Nguyen chatted with Atlanta magazine about their viral post, how they’re working to mobilize Asian Americans in Atlanta, and what keeps them going.

Once we started trying to do outreach to younger Asian American voters, I enlisted Kavi’s help because she has a lot of young AAPI friends, and I wanted to pick her brain on what would appeal to younger people and get them engaged in politics. It’s not very glamorous, and not something I think Asian Americans tend to be exposed to in their households. I don’t think that our school systems really do a good job of voter education, either.

How did you figure out what your approach would be?
Nguyen: We both thought it would be good to make something that was accessible and funny and entertaining to reel people in, and then get educational. Kavi is a talented videographer. The way I pitched it, I made it sound very simple like, “Oh, we should just do videos that are funny and educational,” but it’s actually a lot more work than it might look to be.

How did the two of you meet?
Vu: I do spoken-word poetry, and Phi was doing medical malpractice as a lawyer. And she reached out to me in 2015 to ask about a career in writing after she saw me doing some spoken word at an event. From there, we became friends on Facebook. I saw she was doing a lot of Asian American outreach and voter outreach. She started Vietnamese Voices, which was trying to get more Vietnamese Americans to register to vote and be engaged. We started doing some work together, like canvassing.

Nguyen: The rest is history.

Your 2018 Constitutional Amendments + Referenda Breakdowns went pretty viral in Atlanta. Where’d that idea come from?
Nguyen: Part of why we chose that format is because we thought it would be really boring, quite frankly, to talk about the amendments in a video. I mean, that’s pretty dry.

Vu: This was an idea from the Center for Civic Innovation, who have been super supportive. They helped us start our first season with a $10,000 grant and encouraged us to talk with our target audience. That led to us doing a tour to talk to a thousand Asian American millennials. And what I was really getting from their feedback was that the videos were great, but sometimes they just wanted something quick and easy on their own time. Especially for something as complicated as the breakdown—there was no way for us to make it quick and easy in a video. For them to quickly be able to get that information in the graphic was important, and that’s what they told us that they would want. So we just went with that feedback.

The average ballot question in 2017 required TWENTY YEARS of formal education to comprehend. (That means it's written…

What are some other ways you’ve worked to get Asian American Atlantans more civically educated and engaged?
Vu: We started as strictly a web series, and I like to think that season one did really well in increasing the engagement and turnout. For season two, we wanted to do more and add some on-the-ground efforts. We did a high school and college tour, where we visited a bunch of different places in Georgia—Athens, Emory, Georgia Tech—to talk with Asian American student organizations with mostly Asian American membership about the importance of voting. We started more conversations around the Asian American communities and what issues we face that can be affected by policies.

This was our first year doing more tangible things, like registering voters. We registered, helped register, or helped change the voter registration of about 150 people. Then, when Phi and I started talking about the amendments on the ballot and the two referendums, which I knew nothing about, we created those graphics. We’re shifting to our community’s needs and realizing that sometimes a video is not the best way, and just learning from there.

Your intro video has more than 48,000 views. How’d you get the word out?
Vu: That speaks to why I think we’re qualified to do this work and why we were meant to do this work. Phi and I have both been very engaged in Asian American communities for the past few years. This is also why we chose Facebook as our first outlet—we have a good following and network on Facebook. We started sharing from there, and we saw the community reacted really well to it. And working with organizations, like CPACS (Center for Pan Asian Community Services) and Advancing Justice, that focus on Asian American communities definitely helps.

What is one of the videos you’re most proud of making?
Vu: I think I’m most proud of one that is maybe our most controversial one. I think it’s our second episode ever. We had some examples of what policies have affected Asian Americans and Asian American communities or minority communities, and it got a lot of comments. A lot of people really didn’t like that. Some people would literally say, “Hey, go back to Japan,” or “If you don’t like the policies, then move to California.” That was really [impactful] to me because we weren’t even saying anything that was radical. We were just saying, “Hey, community, this is why you should pay attention.” And seeing the hate that it got really opened my eyes to how important the work is that we’re doing.

Today, we're giving you examples of laws that have negatively impacted Asian Americans. Politicies affect us yet our voices are missing at the table!! Our action item is very simple this week: Just register to vote using this link: www.tinyurl.com/wakeupandregister(If you're already registered, you don't have to register again to vote, but you should wake up a sleeping friend who isn't registered!! Municipal elections are THIS NOVEMBER, ATL. Let's hustle!)**EDIT: The last day to register to vote is October 10. SRYYYY

Nguyen: One of my favorite episodes is from this season. It’s one of our “Women on the Street” episodes. We went around town and administered a merit-based immigration test that is part of a real bill sponsored by one of our congressmen, Senator Perdue. It’s the RAISE Act, and it proposes to vastly change the structure of our current immigration system and shift it away from family-based and make it more merit-based. We actually administered this test that basically gives you merit points based on arbitrary factors, like how old you are, how much money you make, and what your level of education is. You basically needed a certain number of points to be able to qualify to even apply to come to the U.S. under that system. Almost everybody failed the test, including me and Kavi. There was only one person that we spoke to, all day, who passed it. It was a good episode because it was funny and entertaining, but it was also educational. It highlighted how exclusive the policy was. I’m proud of that one.

Wake Up, Atlanta S2E2: Can ATLiens Immigrate to the U.S.?

Since neither of us has managed to snag a Nobel Prize or Olympic Medal yet (sorry, mom), we both failed the RAISE Act’s proposed merits-based test to immigrate to the U.S (sorry, mom, again). Tune into episode 2, where we hit the streets of Atlanta to test whether our fellow ATLiens might fare any better! Then, if you’re feeling gutsy, take the quiz yourself (http://time.com/4887574/trump-raise-act-immigration/) and let us know how you scored!

What’s next for Wake Up Atlanta?
Vu: We just got accepted into the Center for Civic Innovation’s fellowship program, so we will be figuring it out in the next six months. We’ll be getting a lot of mentorship, and we’ll be trying to make Wake Up Atlanta an organization as opposed to just a side project. I don’t want it to be just a web series if that’s not what our audience needs. And if they’re needing us to come and talk with them, that’s what we should do. And Phi and I, after visiting Peachtree Ridge High School and talking with teens, both thought, “Wow, we didn’t have this when we were young.” We think it’s really important, and we might expand on more on-the-ground efforts.

What keeps you going when things get tough?
Nguyen: To me, outreach to the Asian American community is a thing that is really difficult and that a lot of people are trying to crack the code to. It may be that there’s not really one code to crack because we are such a diverse group of people that fall under the umbrella of “Asian American.” We’re certainly not monolithic, so there’s not a one-size-fits-all mold. That’s true with any race, but I think in particular with Asian Americans. We’re talking about so many different countries and languages and cultural differences that it really does make it a challenge.

But, in order to do it effectively, it does need to be Asian Americans at the helm. And I think we’re the only ones who have been stepping up to do it. The major political parties don’t invest time and money in doing Asian American voter education or outreach. One of the reasons why this project was born is because we saw a need for it and the need was not being met by anyone else.

For many Atlantans, the hunt is on for a Covid vaccine appointment 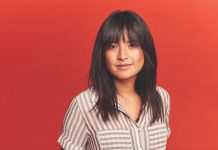 The Next Generation of Giving