(Spoiler alert: If you haven’t watched the midseason four finale or premiere, turn back now.)

So much for stability. When The Governor took his tank to the prison fences in The Walking Dead’s midseason finale, he not only destroyed the prison Rick and company had called home for a season and a half; he also destroyed the little bit of normalcy the group had found.

“What little semblance of hope and security they had is gone now,” Sonequa Martin-Green, who plays Sasha, said Saturday at a media appearance held in conjunction with a panel at Savannah College of Art and Design’s aTVfest.

But arguably the greatest loss was that of moral compass Hershel, played by Atlanta-native Scott Wilson. Wilson and his fictional daughter Emily Kinney (Beth) both attended the panel at aTVfest, where a sold-out crowd packed into the 14th Street Playhouse to re-watch Hershel’s shocking decapitation by katana in midseason finale “Too Far Gone” and ask questions of the fictional Greene family members. (Martin-Green was scheduled to attend the panel, but she was not present.)

“It’s like graduating from high school and a funeral all rolled into one,” Wilson said of his last day on the set. The entire cast and crew dressed in suspenders as a tribute to fallen Hershel. And in traditional Walking Dead fashion when a character is sent to the great beyond, he and David Morrissey (The Governor) were given a grand sendoff that included “a nice dinner” and get together on a producer’s front porch, where they “told war stories.”

Wilson walked away with one very cool (and very creepy) memento from his run on the show—Hershel’s severed head, which Wilson now keeps in a trash bag in his closet. (Wilson, of course, couldn’t specify if this was head The Governor hacked off or the creepy zombified one that Chris Hardwick fed pudding to during Sunday’s Talking Dead.) He also said now receives condolences when he interacts with fans, noting that it’s “like I’m at my own funeral.”

When panel moderator Will Keck, a writer for TV Guide, asked if any of Wilson’s family had watched the scene, Wilson noted that his 99-year-old mother had witnessed it.

“And that didn’t kill her?” Keck asked.

“Well, she’s from Georgia, so she’s tough.” Wilson said, earning laughs from the crowd. “She’s seen me die many times. This was the most recent.” After all, Wilson’s breakthrough role back in 1967 was as In Cold Blood’s Dick.

Kinney was reluctant to go into specifics about how Beth will deal with her father’s loss, but described it as “a real blow and a real shock to the system.”

“You’re gonna see Beth without a home, without like the stability of her father and her sister,” she said. “So she’s definitely going to have to take on kind of a different role.”

And while she wouldn’t reveal any details of the whereabouts of baby Judith (the crowd, for the record, loudly agreed they thought she was still alive), she did talk about how she felt when she read that script. Her reaction to the shot of a bloodstained empty car seat? “Beth really dropped the ball.”

The pair also made light of another grim scene. Shortly after Hershel lost his leg in season three, they filmed a scene where Maggie and Beth watched by his bedside. Wilson apparently found lying on the prison cot a bit too relaxing.

“I remember me and Lauren (Cohan) standing there, and we were both, like, sad, trying to stay in the moment while they’re doing camera stuff,” Kinney said, “And then we were like, “I think Scott’s snoring…”

Fans still reeling from Hershel’s sudden departure from The Walking Dead can catch Wilson in the pilot of Bosch, which is based on Michael Connelly’s Harry Bosch book series. The episode is available on Amazon Instant Video.

As for what else to expect in season four, Keck cited the producers as teasing that an upcoming episode will be “the most disturbing, controversial so far.” What that is exactly is anyone’s guess; Wilson jokingly offered to negotiate with Keck for the spoilers.

“I really applaud the executive producers and the writers for being revolutionary with this last half,” Martin-Green said, “It’s innovative, and it’s shocking, and it’s unpredictable, and it’s gonna really keep people at the edge of their seats.” 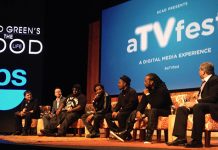 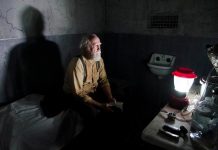 Cast members from Walking Dead, Orange is the New Black, to appear at aTVfest