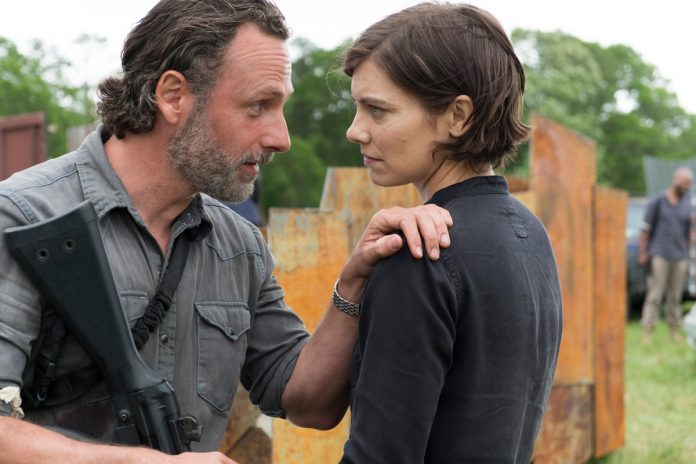 Each week, we comb through the guts of The Walking Dead, much like a horde of hungry walkers, to bring you the episode’s best moments, surprises, and other post-apocalyptic curiosities. This week: A priest, an ex-cop, and a king walk into a compound. . .

Best use of time: Throughout Sunday’s episode, we saw several key events—Rick, Maggie, and Ezekiel’s rallying speeches, the final set-up for the assault on the Sanctuary, the battle itself, a push on the satellite dish outpost, Rick mourning over two graves, and Future Rick. But it’s not clear exactly in what order these events occurred. While it’s likely the graves belonged to Glenn and Abraham, it’s also possible that this was a flash-forward to this season’s newly dead. Honestly, we’re not even sure if the battle at the Sanctuary is happening now or in the near future. What we do know for sure is that Future Rick’s scenes take place roughly three years in the future, given that Judith is credited as “six-year-old Judith.”

Best callback: Carl’s opening scene at the gas station perfectly echoed the opening shot of the pilot, 100 episodes ago.

Best tiger transport: It says a lot about the current state of the TWD universe that Shiva looked completely normal lying in the back of that silver pick-up truck.

Best accessories: Tara kicking ass and taking names while sporting neon orange sunglasses and a Twizzler hanging out of her mouth like a cigar.

Most natural acting: Who else felt like Norman Reedus was right at home riding down the street on his motorcycle, casually shooting off explosions every few blocks? This was most certainly his reward for filming 100 episodes.

Best fake-out: When we first see Future Rick lying in bed, you can hear what faintly sounds like “Another One Bites the Dust” playing in the background. Seems fitting—is Rick’s demise close at hand? But a careful listener will note that’s not Freddie Mercury’s voice we hear, and it’s confirmed in a later flash-forward that Rick was actually listening to Weird Al’s “Another One Rides the Bus.” Pretty sneaky.

Channeling our emotions: When Rick essentially told Eugene to shut up, it summed up our feelings perfectly. We know exactly who Eugene is now.

Most valuable vehicle: Just where are Rick and co. getting all of these RVs from?

Most consistent: While we’ve seen several characters grow and have a change of heart throughout the series (remember when we wanted Gabriel dead?), Gregory is still the absolute worst. You pledged loyalty to a madman, then you deserted a priest who was trying to save your life? Let’s hope he becomes walker feed by the season’s end.

Maury moment: Now that we’ve seen six-year-old Judith, we can start to guess who her biological father is. Despite the improbability, we’re on Team Rick. Shane’s features were just too pronounced to be absent. And season one’s Rick’s baby face is almost Future Judith’s spitting image. Rick Grimes, you are the father!

Biggest question: Why did Rick take a Polaroid of Negan’s hiding place before he got out of Dodge?

Second biggest question: Why, exactly, did Jesus hang on to an old lobster bib?

Most disturbing image: Gabriel being locked in a trailer with Negan. If it were anyone else locked in there, we’d be ready for a showdown, but Gabriel isn’t one to go into situations guns blazing. Faced off with a sociopath like Negan, we’re not sure how the priest is going to get out of this one.

Best kill: The happy RV. While it may have looked like Thomas the Tank Engine went Beyond Thunderdome, there’s no doubt that this recreational vehicle had a smile on its face. We can only take solace that in its final moment, it was able to share the warmth in its heart with everyone within the blast radius.

Episode MVP: Gabriel, not for turning back and trying to save Gregory (because screw Gregory), but for reminding Rick that this war “isn’t about you.” He was able to snap Rick out of his bloodlust state, which hopefully will lead Rick to gain some humanity after a long absence of it.