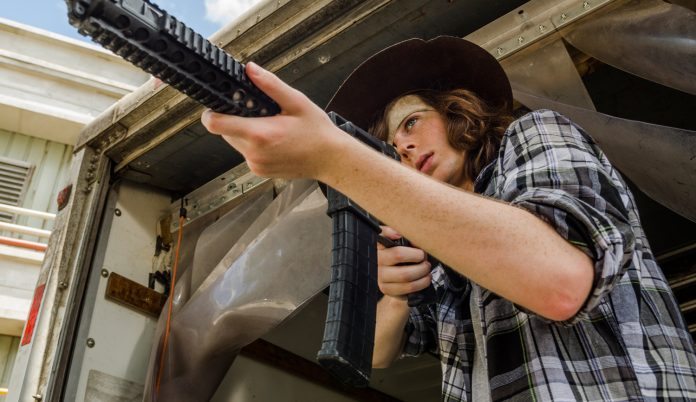 Each week, we comb through the guts of The Walking Dead, much like a horde of hungry walkers, to bring you the episode’s best moments, surprises, and other post-apocalyptic curiosities. This week: Carl sings a song, Negan irons, and Michonne builds a wall.

Best suspense: Even knowing what happens in the comics with Negan and Carl, those first few minutes after Carl was caught infiltrating the Sanctuary were tense. We don’t want to say too much for those who haven’t read, but after next week, you’ll know what we mean.

Most awkward apologies: Negan doesn’t seem like the type to apologize for anything, but he seemed fairly sincere when apologizing to Carl for talking crassly about his eye (“It’s easy to forget you’re just a kid.”) and when apologizing to Olivia for calling her fat. He might have just been trying to get in Olivia’s pants, but he does seem to care about Carl’s feelings, to an extent.

Omar comin’: Between Michonne whistling “Farmer in the Dell” and her murderous intent, did anyone else get The Wire vibes? In a show that’s had numerous roles played by Wire alumni (Bob, Gabriel, Tyreese), this can’t have been coincidental.

Sticky situation: This week: Jesus leaves a trail of syrup behind on the way to the Saviors’ compound. Next week: The Saviors fight off a swarm of deadly, syrup-loving bees.

Another sticky situation: The iron.

Best Savior rule: Disparaging the iron is an iron-able offense.

Oddly correct: When Negan was talking to Carl, he told him to be proud of his bloody eye socket and that “No one is gonna screw with you looking like that.” 1. He was telling Carl to be confident in himself, which, um, isn’t bad advice. 2. He is completely right, as evidenced when Carl later leaned over and threatened Negan. The missing eye makes him look pretty damn threatening.

Missed opportunity: Sure, Carl singing “You are my Sunshine” was tragic and tugged on the heartstrings, but who else really wanted him to launch into a verse of Carl Poppa? Lucille would love it.

Biggest question: We understand that Negan sources all his materials from others, but did someone scavenge an entire Crate & Barrel for him? His bedroom decor looks suspiciously like a showroom, especially considering it’s inside of an abandoned warehouse.

Biggest repeated question: We know we’ve asked this before, but seriously, how has nobody killed Negan? We’ll give a pass to the grunts who may have something to lose, but the wives? Surely one of them (looking at you, Sherry) has means, motive, and opportunity . . .

Continued thought: . . . and speaking of means, motive, and opportunity, both Rick and Carl, plus a Savior “affectionately” called Fat Joseph, have had Lucille in their hands while Negan’s back was turned to them, and none of them acted. Olivia has more fight in her than anybody else so far.

Best bluff calling: When Carl says he’ll just jump out of the window, he’s calling Negan’s bluff. He’s right—that would actually be the worst thing for Negan. If Carl dies, Rick has nothing to lose and will engage in, oh, we don’t know, all out war.

Biggest mystery: Who let Daryl out of his cell? The way the scene was edited made us immediately assume the key was from Jesus, but the handwriting on the note seemed a bit feminine, which has us wondering if it was Sherry. Either way, the band’s getting back together!

Best line: “What you’re saying doesn’t make you an asshole, but it does make you a tremendous shit. Just for now. It doesn’t have to be terminal.” —Gabriel to Spencer

Best kill: Michonne building the wall of walkers. And she’s gonna make Negan pay for it.

Most disturbing image: Every scene with Negan. Like a King Midas of nonconsent, every situation Negan touches is creepy, slimy, and downright makes our skin crawl. While some moments this week (Making his wife say, “I love you,” swinging Lucille while Carl sings “You are my Sunshine,” and holding Judith) were harder-hitting than others, literally every moment Jeffery Dean Morgan was on screen we felt like vomiting, showering, or some combination of the two. Truly, Negan is the worst.

Episode MVP: Carl. It is officially time to stop hating on this kid. He’s brave enough to call Negan on his bluff and smart enough to play his game. He’s learned well from his dad, and, assuming he isn’t dead by the end of this season, he’s gonna make an excellent leader someday.