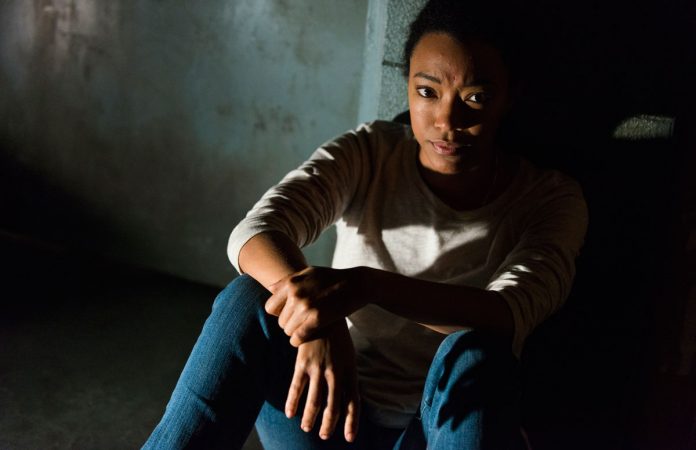 Each week, we comb through the guts of The Walking Dead, much like a horde of hungry walkers, to bring you the episode’s best moments, surprises, and other post-apocalyptic curiosities. This week: Michonne shoots the ground, Rick surrounds, and Maggie regrounds a plant.

Best episode format: We were worried that this episode would only focus on Oceanside (and contain nothing but setup). Following multiple characters’ storylines in one week was indeed a welcome surprise.

Most inconsequential character: Aaron’s boyfriend, Eric, showed up for 30 seconds in this episode, substantially more than he has all season.

. . . and speaking of: What ever happened to Heath?

Best borrowing of a catchphrase: Negan may have a complicated relationship with Rick, but clearly he likes his lingo, as he dropped Rick’s trademark “thangs” while talking to Sasha.

Quit playing games with our hearts: Sigh. Eugene admitted he is a coward after all, traumatized by watching his best friends slaughtered by Negan and never wanting to experience that pain again. But before we can even be upset at him, he gives Sasha a (hopefully painless) suicide pill so she can opt out of being Negan’s pawn. It wasn’t the weapon she tried to manipulate him into giving her, but it showed his true colors as someone who still cares about his friends and has a soul, even if he is putting himself first. We’re still holding out for the long con, but we can’t really hate him either way.

Best character: Clearly Sasha is the Eugene we need, but not the one we deserve.

Worst character: How can Gregory contemplate stabbing a pregnant woman, not do it, then resign himself to having the Saviors kill her for him after she saved his life? We’re eagerly awaiting his death, presumably next week.

But if Gregory doesn’t die: We’d like to see him exiled and then run into Natania. With their powers combined, they could create the most short-sighted, whiny human imaginable. Sad!

Lowest kill count: Hey! No people died this week! Well, except for “Rapey Dave,” but does he even count as human anyway?

Worst sound editing: While a few buoy bells gently rolling in the distance makes sense to hear near Oceanside, the repeated ding, ding, ding, ding, ding in rapid succession was a little too “stock harbor sounds” for the zombie apocalypse.

Most disturbing image: David’s advances on Sasha made our skin crawl.

Best kill: Which is why, for once, Negan stabbing a knife through someone’s neck was a good thing.

Episode MVP: Tara. She broke her promise, but with her help, no one at Riverside died, and instead most of the ladies were on her side as the group retreated with their guns. But more than that, she gave Natania a chance to negotiate with Rick before the bombs went off, she told Michonne not to take out Natania even though she was holding Tara hostage, and she seemed fully prepared to die just to protect everyone around her. She wins the episode, 100 percent.