Home News & Opinion Hollywood of the South The Walking Dead Awards: The march of war 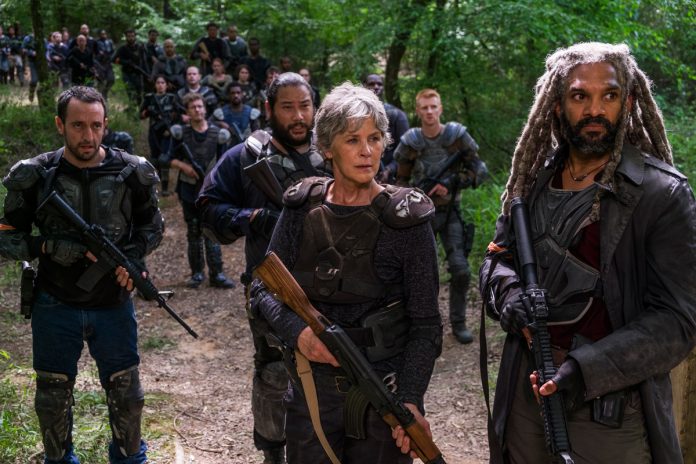 Most annoying Savior: If you found yourself hating Todd’s ineptness during the opening scene, it might not be the first time you’ve groaned at this actor. He’s Lee Norris, more famously known for playing nerdy Stuart Minkus in the early seasons of Boy Meets World.

Tactical breakdown: It took us a little while to figure out just what the war plan is. It seems like step one (last week’s episode) was to cut off the Sanctuary by drawing in the herd of walkers. Now the team’s onto phase two, where they pick off Savior outposts. That way the Saviors can neither reinforce said outposts nor get reinforcements to clean up the mess at the Sanctuary.

Worst tactics: Forgetting that dead corpses reanimate into walkers is a rookie mistake. Everyone’s had over a year to learn the rules of the game. To be clear, we completely understand being overrun by the newly undeceased during a firefight. We just think it wouldn’t be an, “Oh, yeah, that’s right!” kind of moment.

Biggest fake-out: Morgan was clearly tempting fate when he claimed, “I don’t die.” He proved himself correct halfway through the episode, when he outlived his two comrades during an ambush, then proceeded to pick off Saviors like a Carol-esque killing-machine. It certainly seemed like a final bow-out for the zen-master-turned-assassin, but at the episode’s close, he lives to see another day. For now.

Team spirit: Each allied group was wearing armbands that seemed to be color-coded by the neighborhood they lived in—white for Alexandria, green for Hilltop, and orange for the Kingdom.

Best cheat code: Turning on infinite ammo before going to war was a good idea. But in all seriousness, where is everyone getting so many bullets?

Best sound editing: When Morgan walked up to kill Jared, the Savior who murdered Benjamin last season, we thought he’d pull the trigger despite Jesus’s plea. There was a rest in the music, a percussive sound too close to film and television’s ubiquitous slow-motion bullet casing ejection sound, and then . . . nothing. No shot, even though for a second there, we thought Morgan had fired.

Most wasted character: Eric might not make it to episode three, taking a bullet in the gut while fighting the Saviors, but if we didn’t remind you that Eric is the name of Aaron’s boyfriend, would you even know who we were talking about? He’s been used more as a prop for Aaron’s character development rather than a character himself. Just another casualty to TWD’s “too-many-characters syndrome.”

Most needed accessories: And speaking of too many characters, with all of these gunfights, it’s time for some good old fashioned Red Shirts!

War correspondent: Someone took a Polaroid photo of the prisoners at the satellite dish outpost, the second time this season we’ve seen a photo taken during the war. We’re either glad to see Ernie Pyle has returned to life or hopeful that Future Rick will sit down to watch Ken Burns’ The War (Against the Saviors).

Biggest surprise: Morales is a Savior. If you don’t remember Morales, don’t feel bad. He hasn’t been seen for roughly 95 episodes—eight years ago. As Rick said, he was a member of the Atlanta camp, and when Rick and co. decided to seek out answers at the CDC, Morales (and his wife, who is still MIA) decided to part ways, opting instead to travel to their family in Alabama. How he instead ended up in Virginia with Negan is unclear, but knowing TWD, we’re expecting a 90-minute episode detailing his backstory from stubborn survivor to ruthless Savior.

Most disturbing image: Rick enters a room he assumed was filled with the Saviors’ guns but instead held a sleeping infant named Gracie, according the name painted on the wall next to a half-finished animal mural. And since the man guarding the room, who Rick killed, had a tattoo on his chest that read “Grace be God,” we can assume that was her dad. Rick is visibly upset when he realizes what he’s done, but Morales finds him before we have a chance to learn if Judith is getting an adopted little sister or not.

Best kill: Almost as long as TWD has been around, people have postulated on how, if at all, Morales would return. It didn’t help that actor Juan Gabriel Pareja had been fanning the flames, saying he believed the character was still alive. Now, however, all those fan theories are dead with Morales revealed as a Savior. Let’s all focus on the next batch of theories—whatever happened to Heath?

Episode MVP: Ezekiel, for making the most of the apocalypse. He could die, all his friends could die, his pet tiger could die, and yet he’s out there having the time of his life. Or, at least, he’s pretending like he is. It’s hard not to follow that enthusiasm—even Carol seemed to be rolling her eyes a little less toward the episode’s end.