Home News & Opinion Hollywood of the South The Walking Dead Awards: Plot armor is officially off the table 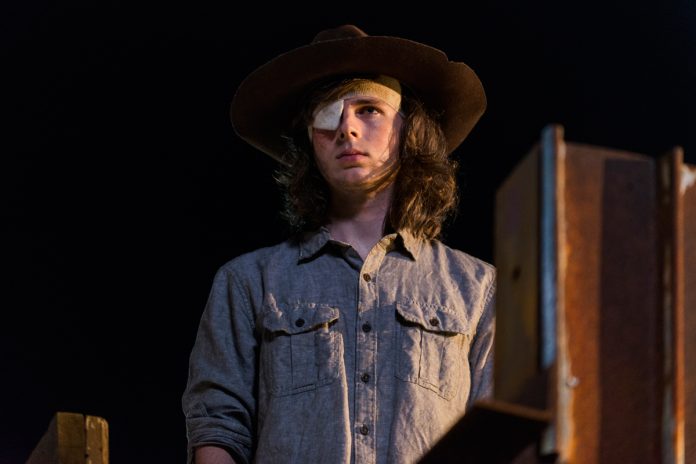 Each week, we comb through the guts of The Walking Dead, much like a horde of hungry walkers, to bring you the episode’s best moments, surprises, and other post-apocalyptic curiosities. This week: we rubbed our eyes after eating jalapeños, we stubbed our toes, and someone was cutting onions. Oh, and Carl is about to die.

Best conspiracy theory: A big complaint from TWD fans as of late has been the repetitive nature of the show. While this season has definitely been guilty, with several episodes seemingly failing to advance the plot, what if that dullness was all just to lull us into a false sense of security for Carl’s bite?

Biggest request for Season 8B: Can we please stop with the montages of everyone’s faces? It was fine once but we’d rather see that time devoted to furthering the plot.

Humanity gained: Eugene finally, finally, does something right when he wakes Gabriel and Dr. Carson (with a battery-powered mister), informs them that one of the Sanctuary’s guards is distracted by a heavy dose of laxatives, and drops the keys to an escape vehicle. However this comes after he is allegedly responsible for helping Negan and the Saviors escape from the Sanctuary to attack the AHK. That’s pretty much impossible to come back from.

Humanity lost: After watching one of her men shot inches from her, Maggie returns to the Hilltop seeking revenge and takes it out by shooting one of the Savior prisoners in the head. She uses the dead Savior to send a message to the others (“We have 38 more. Stand down.”) but it’s still a shocking moment.

Worst decision: Any hope that Enid and Aaron had of the Oceanside group joining the fight against the Saviors (they even brought a truck from a whiskey distillery as a peace offering!) was eradicated instantly when Enid shot (and presumably killed) the group’s matriarch Natania.

Biggest question: Uh, where did the Scavengers run off to?

Most loyal (while also being completely disloyal): Hats off to Dwight, for, unlike Eugene, seeming to completely shed his previous scumbag ways. He made sure the Alexandrian group was able to escape the burning city, then drove his team of Saviors straight into a trap and proceeded to help Michonne, Daryl, Tara, and Rosita kill them. We know Tara and Daryl are still out for his blood, and Dwight’s done a lot to deserve that, but he’s also repented a lot this season.

Best reunion: Daryl and his vest

Best exchange:
Rick to Negan: You ever shut the hell up?
Negan: Nope!

Most disturbing image: Neil’s death. Just kidding—it was obviously Carl’s bite. (Did you even know that Hilltopper was named Neil? We didn’t before tonight.)

Best misdirection: You might be asking yourself when exactly Carl was bit. Go back and watch this scene from the sixth episode of the season. If you really watch Carl’s eyes just before he shoots the walkers, you can see it. The sheer amount of blood on his shirt afterwards only confirms the bite.

Best kill: Carl. Not his impending death, but rather the future plot lines that are now thrown into disarray by this departure from the comics (where Carl is still alive). While this isn’t the first major revision the show has made (Michonne basically fills Andrea’s role in the comics), it’s by far the biggest. We were expecting the “All Out War” arc to end with a time jump, just as the comic storyline does, but now that’s uncertain. There will be be no Carl/Negan Silence of the Lambs-esque banter; in fact, if Carl can die, so can Negan. We’re still thinking something similar to the Whisper War will occur either against Oceanside or the Scavengers, but we’re now firmly in uncharted territory.

Episode MVP: Carl has come a long, long way from whiny “Coral,” once the butt of many a TWD fan’s jokes. His cadence in his “kill me” speech to Negan was strikingly similar to his father’s, and Carl proved he’d grown into his dad’s sheriff hat by leading the Alexandrians safely into the sewer and even by saving Siddiq in the first place. That act of kindness ended up being his downfall, but, barring some crazy twist in February when the season returns, he’ll die a hero and someone his father can be proud of. (PS: Bravo to Chandler Riggs, whose performance stole the show in this episode.)

And once again, where exactly does Rick fall this week on the special holiday edition calm/crazy scale?

See you all on February 25!