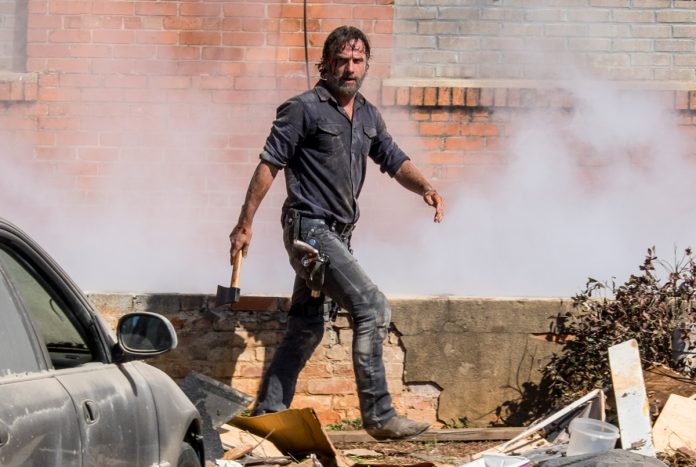 Each week, we comb through the guts of The Walking Dead, much like a horde of hungry walkers, to bring you the episode’s best moments, surprises, and other post-apocalyptic curiosities. This week: Dwight, you can Go Your Own Way; Lucille is a Girl On Fire; and Maggie learns the key to Stayin’ Alive. Knowledge, please.

Newest rides: Both Rick and Negan had some of the cleanest, newest cars we’ve seen on TWD since the early seasons’ green 2011 Hyundai Tucson.

Most obvious observation: As Simon so elegantly notes, Rick and Co. “don’t scare.” In other news: sky blue, grass green, bears live in the woods.

Worst joke: What was up with that bit about “moisture” not being a real word?

Best deus ex machina: We’re not sure what to make about Georgie and her knowledge-for-food-and-music business. The whole concept seems like something out of a fever dream. How exactly does this woman go from community to community Mary Poppins-ing their leaders and not get shot or robbed along the way? Yeah, sure, Tweedle Dee and and Tweedle Dum seemingly keep her safe, but this whole thing felt way out of left field.

Second worst tactics: Rick, if you know you only have so many bullets, maybe wait until you have some sort of visual confirmation before you just start firing at Negan’s car? Even the bullets that went through the door had a much better chance of hitting him than the ones aimed at the belly of the overturned car.

Best baseball fundamentals: Negan wasn’t afraid to choke-up on his swing, but Rick’s slide was flawless. Hope he doesn’t end up with a raspberry tomorrow though.

Best vocabulary: Was Simon an English teacher or a writer in his past life? Because he loves to throw the ten dollar words around, in this episode showing an affinity for “e”-words like “expunge” and “extemporaneous.”

Worst smell: Rotting walker guts plus years of blood and brains building plus fire must equal one disgusting smell on Lucille.

Best timing: It’s a good thing Jadis just happened to be around to kidnap Negan. What are the odds of that?

Best 180º: We know we raved about Jadis’s arc two weeks ago, but seriously, to go from hating a character to so much to loving them, well played, TWD.

Best line: “I’m a goddamn cat.” —Negan, when asked if he was still alive after falling into the basement

Most disturbing image: The classic, Nicotero-brand, goey, gory zombie guts spilled and pulled out of the walkers chained to the fence, which the Saviors coated their weapons with for the attack on Hilltop.

Best kill: Simon seemingly destroying Negan’s authority by telling the group that he was gone and suggesting they massacre the Hilltop instead of just scaring them, as Negan had originally decreed. Simon is going to get himself killed with these shenanigans (especially now that, thanks to Rick, Negan knows he slaughtered everyone at the landfill), but it gives us a very interesting plot point until then, especially since Dwight has to figure out how he’s going to stop this massacre without outing himself as a mole.

Episode MVP: Flaming Lucille. All the fun of a bat, all the toughness of barbed wire, all the poison of walker guts, and all the raw, psychological warfare of fire. Rick used the power R’hllor, the Lord of Light to give us one fine murder implement.