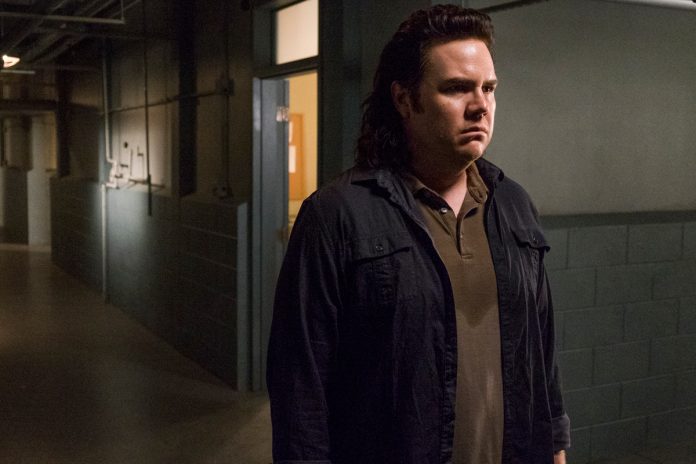 Each week, we comb through the guts of The Walking Dead, much like a horde of hungry walkers, to bring you the episode’s best moments, surprises, and other post-apocalyptic curiosities. This week: Eugene looks after himself, Michonne bails after Rosita does, and Rick survives Jadis’s twisted definition of “after.”

Draw me like one of your French girls: Most would agree: Rick (and, of course, Andrew Lincoln) is a pretty good-looking dude. But snapping photos of the guy and sketching him when he’s locked up half-naked in a shipping container, then promising to sculpt him after he’s been attacked and killed by a walker? That’s horror-movie levels of creepy.

Hardest to pronounce: Eugene came up with a quick acronym to refer to Alexandria, the Hilltop, and the Kingdom: AHK. But he pronounces it “auck,” which, if he hadn’t explained, we would have had no idea what he was talking about. It doesn’t take that much longer to say “A-H-K,” Eugene, come on.

Most relatable: Gabriel saying to Eugene, “all I want for you is to do the right thing,” is literally all of us.

Found him! When we last saw Morgan, he was walking away into the woods, fed-up and frustrated, his destination unknown. In this episode, he’s manning the sniper lookout of the Sanctuary, and no one seems the least bit surprised to see him there. Except the audience. Let’s hope his upcoming transition into Fear is better explained.

Worst choice: “I also wish for Razzles,” Eugene quips. Really? Of all the candies you could choose to wish for, a fruit chew that turns into gum? I mean I guess it’s utilitarian, but what about Reese’s Peanut Butter Cups, or Snickers, or literally anything else . . .

Most boastful: “I’m living no matter what,” Negan says proudly to Eugene. “I’m too good at this.” If we didn’t know any better, we’d say that’s a clear sign this season’s big bad is going down. (The comics, however, have us believing otherwise.)

Biggest death wish: Daryl’s conversation with Michonne just before she backs out of ramming the truck into the Sanctuary proved that he doesn’t really care if he lives or dies anymore—he just wants the Saviors (and Negan) dead. As far as we know he made it through the truck incident, but Rick is certainly going to kill him now that he’s seen what Daryl’s done.

Name that tune: The song playing on the gliding iPod? That would be “Paul Simon” by indie band The Russian Futurists. What’s curious—that song was released in 2005. And that iPod is either a first or second generation model, meaning it was released between 2001 and 2002. That’s a pretty long time to not upgrade your device, but hey, if it ain’t broke!

Complicated villain: When Eugene rushes into Gabriel’s room and declares that he doesn’t care about doing what’s right, he’s just going to do what it takes to survive, it felt like our mullet-haired friend was truly lost. But a few minutes later, he opts not to rat out Dwight’s betrayal to Negan. Granted, this was most likely because Dwight was standing right next to him, and Eugene’s not exactly one to watch the consequences of his actions. But as he tearfully chugged the bottle of wine in the following scene, it was clear how conflicted he is. He’s undoubtedly a coward, but he seems to still have empathy for others. It’s just unclear who will ultimately benefit from that empathy: the Saviors or AHK.

Best exchange:
Rick, negotiating with Jadis: We have a deal?
Jadis: After [Negan is dead], Saviors’ things our things. If yes, then yes.
Rick: It’ll be all of ours. You’ll get a fourth.
Jadis: Half!
Rick: A fourth.
Jadis: A fourth and I sculpt you after. Stand for me. Those (nods at boxers shorts) off.
Rick: (raises bound wrists) These off! No sculpting.

Most disturbing image: Dwight shooting down the iPod glider. It was literally a historical record of the culture that existed before the apocalypse. It belongs in a museum!

Best kill: Rick ripping the head off the helmeted walker on a stick wasn’t exactly a kill, considering the guy was already dead, but it was one of the most epic images of the season thus far. And he effectively shut down Jadis’s bizarre run-around at the same time, finally getting her to agree to his plan.

Episode MVP: Dwight, because while he did destroy a perfectly good iPod, he didn’t put two through the back of Eugene’s skull. Not only was his action the more humane one, but I doubt Team Rick would be super thrilled if they discovered Dwight killed Eugene, even if it was to protect Rick’s plan.