Home News & Opinion Hollywood of the South The Walking Dead Awards: It takes a village (or three) to destroy... 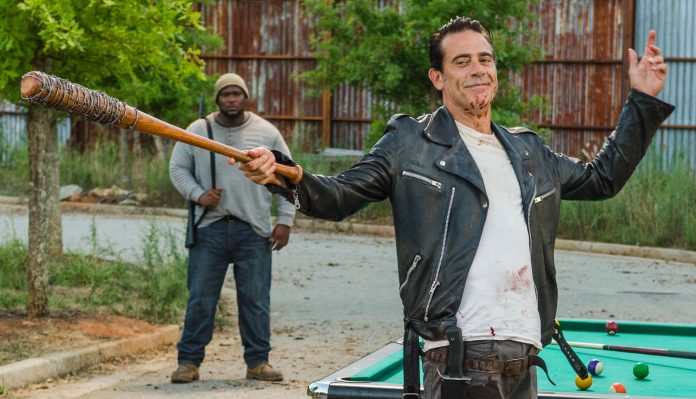 Each week, we comb through the guts of The Walking Dead, much like a horde of hungry walkers, to bring you the episode’s best moments, surprises, and other post-apocalyptic curiosities. This week: Negan wants a vacation house with a pool, Negan shoots pool, and Negan puts an end to a genetic pool.

Most realistic: Bless the TWD writers for finally giving us something to smile about with pregnant Maggie smelling the apple pie from a mile away and tearing into it like a hungry cheetah.

Fear the beard: Comic fans will be happy to see that Negan is clean shaven now. We’re wondering if his facial hair also made it into Norman Reedus’s freezer.

Worst judgement: Richard, when he told Carol, “I imagine violence and fighting isn’t something you’ve been a part of.”

Why no one can kill Negan: Based on this week’s episode, we finally have an answer as to why nobody has killed Negan: He has too much plot armor. Seriously, what are the odds of Lucille taking Rosita’s bullet? Sure, you can believe Michonne’s monologue about how it will take everyone united as one to kill him, but nope, it’s the plot armor—it’s over 9000.

What actually will kill Negan: Ten minutes of Eugene speak will probably drive all the Saviors to madness. Death can only follow.

Biggest mystery: Who’s the person in the boots hiding behind Walker Lake?

Stick around: If you missed it, there was a bonus scene after the credits of Boots hiding in a tree at night, spying on Gabriel at watch on Alexandria’s walls.

Best extra: We know the scene around the pool table was pretty intense, but the Savior we’re dubbing SkunkBeard stole the show. Look for him just after Negan says, “I’ve never been so wrong in my whole life.”

Worst parenting: Now that the entire Monroe family is dead, can we all agree that the kids were just terrible?

Stupid or brilliant? Rosita’s emotional outburst seemed to undo everything Rick had been working hard to do. By shooting Lucille in her Negan assassination attempt, she got Olivia murdered, herself slashed, and almost got other Alexandriates killed. However, if none of that had happened, Rick wouldn’t have been as moved to fight. Still . . .

. . . Stupid: With all the connections to The Wire we’ve been pointing out, a quote from that show that really stuck with us this week was: “You come at the king, you best not miss.”

Most welcome return: Rick and Michonne are cute, sure, but no bond is stronger than the love between Daryl and Rick, as evidenced with the pair’s tearful hug when they were finally reunited. The bromance is back!

Best line: “I just bent over backwards to show you how reasonable I am. Your kid? He hid in one of my trucks and machine-gunned a bunch of my men down, and I brought him home safe and sound. And I fed him spaghetti.” —Negan to Rick

Best kill: The end of the single-storyline episodes! We don’t mind three interweaving plots, but please, in the future, give us a little bit of everything every week. It works for Game of Thrones and Westworld!

Most disturbing image: Spencer holding his own intestines. We couldn’t stand the guy, but that was absolutely disgusting.

And once again, where exactly does Rick fall this week on this very special holiday edition of the calm/crazy scale?