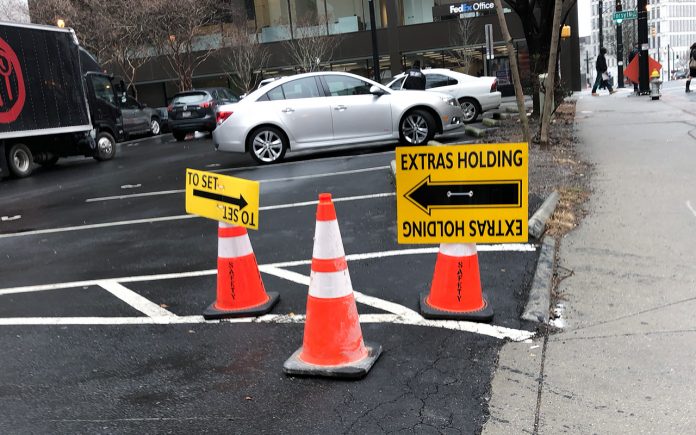 Spring has arrived in Atlanta, and yellow-green pollen isn’t the only thing covering our city. We’re moving into peak film and television production season, so you’ll be seeing more yellow filming signs as well. Here’s what we saw filming and where we saw it in metro Atlanta in this past month:

Mark Wahlberg, Rose Byrne, Octavia Spencer, and Isabela Moner started filming a new movie in Atlanta in March. Instant Family (production code: IF) is a comedy about a couple getting in way over their heads after adopting three children. We first saw IF signs pop up in Kirkwood on March 5. On the 8th, filming took place in East Point. Additional signs were placed in North Druid Hills on Clairmont Road on March 15. Between the 20th and the 23rd, crews worked in Marietta under the ever-watching eyes of the Big Chicken. They set up a basecamp nearby at Roswell Street Baptist Church. Filming then moved ITP to Piedmont Park on March 27 and 28. Most recently, signs were up again in Cobb County with a basecamp was spotted at Kell High School.

Also new this month, BET is shooting a new miniseries, The Bobby Brown Story (JCE). Starring Woody McClain as Bobby Brown and Gabrielle Dennis as Whitney Houston, the series began production in early March. We first noticed filming in Milton at Bell Memorial Park between March 6 and 7. Signs were spotted ITP on March 13 at Northside Drive and Old Powers Ferry. Most recently, filming took place in Old Fourth Ward on the 27th.

If you live in Marietta, you might have noticed something set up at Six Flags White Water for what seems like the entire month. It’s Hellfest (GRANVILLE), a new horror movie staring Amy Forsyth, Bex Taylor-Klaus, and Reign Edwards. The film will take place on Halloween night (of course) at a theme park. When a killer starts murdering guests, everyone just assumes it’s all part of an act.

It’s pilot season, and that means new shows are coming to Atlanta! Well, just one show, actually . . . kind of. Unfortunately, Vancouver really dominated pilot season this year, so we’ve only got FOX’s The Passage (HVN) filming in town. Eagle-eye readers will notice two things: first, yes, they’re using the same code as FOX’s The Gifted. Second, and bonus points if you caught this, The Passage was a mid-season replacement pilot originally filmed in Atlanta last summer. According to Variety, executives were not happy with the quality of the pilot, and instead of airing the show mid-season, they decided to push it back and reshoot with a new director. The Passage shot at Callanwolde Fine Arts Center on March 13. Two days later, they were in Douglasville. On March 17 and 19, crews filmed in Conyers. Production moved to Acworth on the 26th.

When we first started tracking filming in the Hollywood of the South way back in 2014, Goosebumps was filming in Atlanta. Now, four years later, its sequel, Goosebumps: Slappy Halloween (GUMMY), has set up shop. Starring Jack Black, Madison Iseman, Wendi Mclendon-Covey, Chris Parnell, and Ken Jeong, the film is rumored to focus on the iconic, 90s-nostalgia-inducing Goosebumps character Slappy the Dummy. Goosebumps started early March in Kirkwood and has been spotted repeatedly in the neighborhood since then. Additional signs were up on March 22. Outside Kirkwood, signs were placed in Decatur on the 21st. A major Trick-Or-Treating scene was shot back in Kirkwood on the 26th.

The Super Fly (GRAVITATIONAL) remake worked into early March. On the 5th, filming took place in Grant Park. Additional signs were placed along Jimmy Carter Boulevard on March 7. On the 8th, production moved out to Emerson for a day of shooting.

OWN series Love Is_ (LOVE) continued filming in town as well, with signs up at Briarcliff Road and the By Way on March 2. On the 13th, crews filmed in Conyers. Production then moved to Fayetteville for the 15th. On March 28, a scene was shot in Covington.

Netflix’s Ozark (BCP) seems to have settled on one code to use, finally. The series, filming its second season, has been shooting for a while now, but that’s standard operating procedure for Netflix, with similarly long-running production times for Stranger Things and Mindhunter. The series shot at its Blue Cat Lodge set on Lake Allatoona between March 8 and 9. Signs were spotted in Cumming on March 13, and a scene was shot near Lawrenceville on the 14th. March 23 took production to Lake Lanier, and on the 27th, crews took a rare trip to Midtown. We also spotted BCP signs in Norcross on March 29.

CBS’s MacGyver (EYE), perhaps our most -potted TV show, is also still shooting its second season. On March 8, signs were placed along University Avenue in southwest Atlanta. The next day, crews worked in Stockbridge. Filming took place in Decatur on March 19. For the next few days, Conyers’ Georgia International Horse Park was the location. Most recently, on March 24, a scene was shot in the Grant Park neighborhood.

Also this month, Dynasty (CROSSEYE) had signs up near SunTrust Park on March 13. The Haunting of Hill House (HHH) was at Piedmont Park on March 2 and near Lakewood Amphitheater on the 21st. Cobra Kai (CK) did a few reshoots in Griffin on March 24. Also, Godzilla: King of Monsters (FATHOM) and Night School (GED) are gearing up for a few reshoots early next month.

And finally, it’s not only a good time to be a big-shot movie producer in Atlanta, but there’s something for the little guys too! Project Casting reports that Pinewood Studios Atlanta has launched a new program via Kickstarter to help fund independent productions. It’s a part of Kickstsarter’s Patrons program, which aims to connect creative institutions with those seeking funding. Essentially, big organizations like Pinewood agree to provide funding—in their case, $10,000. Kickstarter then provides the donating organization with a selection of crowdfunding campaigns. The institutions dole out their promised money as they see fit. So if you’ve always wanted to make a movie, put together a Kickstarter crowdfunding campaign and maybe the studio behind Infinity War will be your backer.

What was filming in Atlanta now: How the film industry reacted to COVID-19 and what shot before sets closed