After nearly a decade of dragons and direwolves, Starks and Lannisters, sex and violence, shocking twists and furious arguments on Twitter, HBO’s fantasy epic Game of Thrones is finally coming to an end at 9 p.m. this Sunday. And no matter if you think Daenerys’s latest actions were completely out-of-character or perfectly in line with what we’ve seen for eight seasons, or if you’re still clinging to hope that Jon might finally give poor Ghost a hug if he claims the Iron Throne, one thing we can all agree on is that you won’t want to miss what is arguably the biggest television event of the year. If you want to spend Sunday night someplace other than the comfort of your own couch, here are a few venues hosting the finale live so you can cheer, cry, and shout with your fellow Atlantans.

The Ultimate Finale Party at Second Self Beer Company
When: 7 p.m.
Where: 1317 Logan Circle Northwest, Atlanta
What: Second Self is brewing two special GOT-themed beers that they’ll launch during a separate party at 2 p.m. Saturday: Oathbreaker, a dark farmhouse ale with notes of chocolate and cherry, and We Must All Die, a hoppy farmhouse ale with notes of hay and citrus. Illegal Food will provide the eats, and there will even be knights from Medieval Times—in case the finale wasn’t entertaining enough.

For the Throne Finale Viewing Party at Buckhead Theatre
When: 7 p.m.
Where: 3110 Roswell Road, Atlanta
What: If you want to see the finale on the big screen, head to Buckhead Theatre, where radio station Q99.7 will also host GOT trivia, a costume contest, and other giveaways. While admission is free, the RSVP list has already closed, but if you arrive early, you may have a chance at getting in.

Atlanta Brewing Co.
When: 7 p.m.
Where: 2323 Defoor Hills Road Northwest, Atlanta
What: Watch the finale at Atlanta’s oldest brewery with the Daenerys Made Me Do It brew—a special version of the brewery’s Dany Made Me Do It Gose with banana, vanilla, lime, and chili.

Noni’s
When: 9 p.m.
Where: 357 Edgewood Avenue Southeast, Atlanta
What: Plan to arrive early if you want to join the party at Noni’s, which has been hosting weekly screenings all season. They’ll play last week’s episode at 8 p.m. and repeat the final episode once it ends

Wine Me Down
When: 3 p.m.
Where: 11775 Northfall Lane, Alpharetta
What: For those in the suburbs, this Alpharetta wine and cigar will host a viewing party with food, drink, and hookah specials.

Brunch of Thrones at City Tap
When: 11 a.m.-3 p.m.
Where: 848 Peachtree Street Northeast, Atlanta
What: Pregame the finale at the new Midtown bar and restaurant, which will host Game of Thrones trivia alongside food and drink specials. 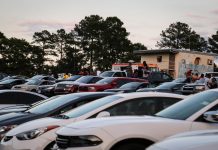