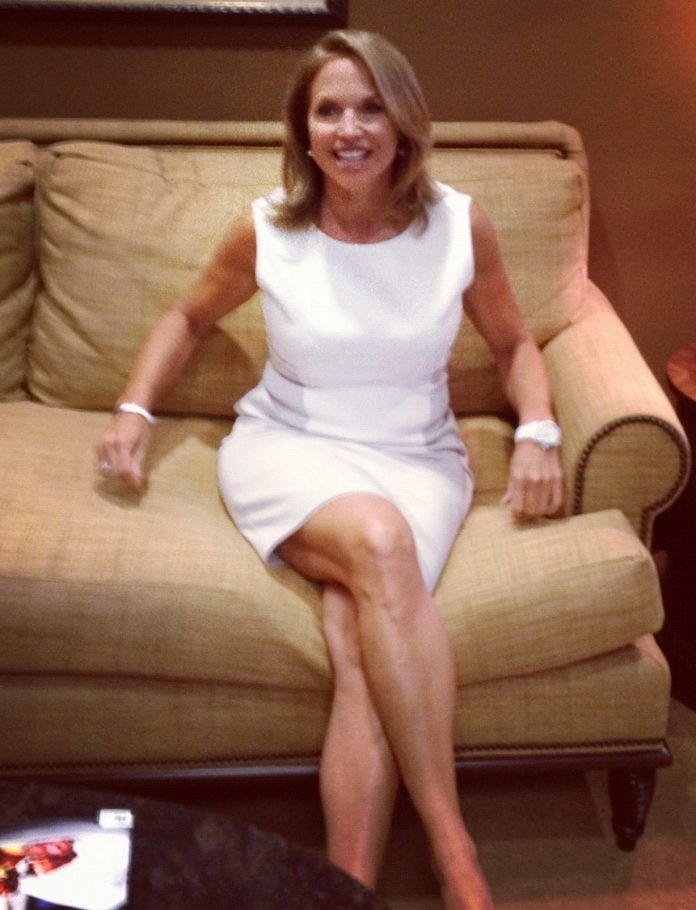 In advance of Katie Couric’s new ABC/Disney syndicated talk show “Katie” set to debut September 10 at 3 p.m., one of the most recognized media personalities on the planet has opted to go hat-in-hand, market-by-market to introduce viewers and the press to her new live topical show. With most networks relying on the more economically feasible teleconferencing, tweet ups and Facebook fan pages to get their talent in front of the media, Katie is kicking it old school at stops across the country. On Tuesday during a lunch presentation at WSB-TV, Couric presided over a lunch ‘n’ learn dedicated to “Katie” and then sat through a series of TV and print interviews with local reporters.

But given what’s at stake and how the success of “Katie” relies on that two-decade emotional bond with viewers, it makes sense to put the ridiculously likeable reporter in the room with other reporters. In one of the most creative and lucrative TV deals in recent history, the former “Today” and “CBS Evening News” anchor will re-team with Jeff Zucker, the former NBC wonder boy who executive-produced “Today” through its ratings golden age and throughout most of Couric’s reign.

The venerable ABC soap “General Hospital,” recently experiencing a fresh, fun jolt of creative life (not to mention a fortuitously timed uptick in ratings), thanks to new executive producer Frank Valentini and head writer Ron Carlivati, (former “One Life to Live” creative team members who have recently added some of Llanview’s most popular residents to their new Port Charles zip code) moves to 2 p.m. and will provide “Katie’s” lead-in. Earlier this year, ABC renewed the soap for another two years, ensuring it will celebrate its 50th anniversary on-air, and neatly deactivating any angry soap fans ready to stage a social media campaign crucifying Couric for the daytime drama’s cancellation.

On Tuesday, after finishing a series of TV segments under the hot lights in WSB-TV’s Studio A, Couric cracked to WSB general manager Tim McVay, “Can we maybe find a couch somewhere to do the print interviews? I feel like I’m on ‘Face the Nation’ here!” Minutes later, relaxing on McVay’s couch, Couric patted the cushion next to her and gave Atlanta magazine this exclusive one-on-one  Q&A:

Q: You’re best known for being a part of these iconic TV brands, “Today” and the “CBS Evening News.” With the launch of “Katie,” you’re beginning something entirely new and you quite literally own the show. How exciting is it to be able to put your imprint on a new show?

A: It’s my little start up (laughs). It is exciting. Creatively, it’s thrilling to not have someone say, “No, we’re not doing that” or “That’s not how we do things around here.” As someone who’s always had a penchant for rule-breaking anyway, it’s great! I get to make my own rules with a team of people. I get to say that anything’s possible. We get to write our own script and the narrative is ours to create.

Q: In this deal, ABC is acquiring one of the most recognizable media figures on television. Your personality and your life will be a critical part of “Katie.” How is that trade off for you, how comfortable are you sharing those personal aspects of your life knowing that you can’t put a gallon of ice cream in your shopping cart off-screen without someone tweeting about it?

A: I think I’ve always been able to calibrate that in a way that doesn’t raise the ick factor too much. I’ve never yammered on about my kids and my own personal life to the point where someone wanted to put a sock in my mouth. So I hope I have the ability to interject personal things in a natural, spontaneous way that doesn’t seem forced or trying too hard. I think I did that pretty successfully on the “Today” show. I don’t mind sharing some things with my audience. For example, I would really like to do an hour on menopause. Why? Because that’s my life right now. Every time I turn around, there’s another reason that something is happening to you and people say, “Oh, that’s just menopause.” And I’m like, “Why didn’t anybody tell me that?” I’ve always felt when you have access to a television audience and you’ve learned something important, why not share it? That’s how I felt when my husband [Jay Monahan] died of colon cancer [in 1998]. It was this awful, awful thing that happened to us. But to learn you can be screened for this disease and it has a 92 percent cure rate if detected early and not share that, would just be wrong.

Q: One of the distinguishing qualities of your tenure on “Today” was that especially in the show’s first hour, you served as a kind of general assignment reporter. Every morning, you were required to interview various newsmakers who turned up in that day’s news cycle. How will those experiences and that versatility assist you as you tackle topical themes on “Katie?”

A: I’ve had to be a quick study and that’s always been a part of my skills set. I’m good at synthesizing complicated information and making it understandable and accessible. I can also switch gears on a dime. I’m also naturally curious and try to ask questions that I think viewers want to know. Some interviewers try to show off how much they know about something and their questions are interminably long and drawn out. It becomes more about them showing off than about finding facts. I think I’ve learned how to do a pretty good interview at this point. Each interview requires a different approach and a different tone. Every interview is like a meal unto itself. You get something different with each one you do and you approach it differently. I’m hoping my experience will help as I dive into these topics. I did a lot of homework on “Today” and learned a lot. I figured out, “OK, I have five minutes, here’s this massive chunk of information. What are the most important things I need to get across for viewers?” I’ve become a good editor over the years.

Q: From my perspective, one of the great benefits of our media landscape being up-ended in recent years is the creativity that has grown out of it in terms of media contracts. Your deal with ABC/Disney is a dual deal where you have your own syndicated talk show and are also a member of the ABC News team. Similarly, Christiane Amanpour recently inked a deal where CNN and ABC News will quite literally share her on air. That would have been unheard of even a few years ago. Is it exhilarating to see those old contract rules being tossed out in the digital age?

A: The lines have definitely been blurred; part of it has been for economic reasons. It does give you more flexibility and a bigger reach. For me, pairing up with ABC News has been invaluable because I have the support of a network behind me. It’s hard to do this when you’re just out there on your own. I have great admiration for Oprah for being able to do that, to create this whole network, this whole entity without the benefit of that huge network infrastructure and reputation.

A: You mention Oprah. Was there a sense of a relief when she decided to retire from the daytime landscape, opening up the playing field for a show like “Katie?”

Q: Relief is maybe not the right word. It was the end of an era. People are usually hyperbolic when they say that but in Oprah’s case, it was definitely true. She had such enormous impact and was so masterful at doing that show. But of course, are you kidding? I would have thought twice about doing this and entering this genre if Oprah was still dominating. The kind of show I want to do is most similar to hers. It would have been very difficult to compete with Oprah Winfrey.

A: Right, whether we like it or not [laughs].

A: When I was at CBS, I jumped in feet first with it. One of the reasons that I was interested in getting involved with social media, when a lot of my traditional mainstream counterparts weren’t, was that I missed that personal connection with people. Because I was doing a kind of straight newscast, I missed feeling that sense of community I felt with viewers when I was doing the “Today” show. I wanted them to see a side of me that wasn’t on the evening news. I’ve really enjoyed it. It is strange on Twitter when people can be really nasty to you and rude and that’s kind of off-putting at times. But the good has definitely outweighed the bad. I remember putting a tweet out about my dad when he was having hallucinations when he was sick [Couric’s father, journalist John Couric died at age 90 in 2011 after a lengthy battle with Parkinson’s Disease]. I put something out there on Twitter about what he was experiencing and I got so many interesting and informative tweets from viewers, nurses and ER docs and people with aging parents like mine. It made me stop and realize, “This really is a community.” It was a great thing to be able to feel that and experience that.