Home News & Opinion Development Wylie Hotel, set to open on Ponce in 2021, aims to be...

The property at 551 Ponce de Leon Avenue has been a lot of things since it was first built in 1929. It’s been the Garner-Wallace Hotel and the Ponce Student Suites. It was even home to the first location of MJQ. In early 2021, it will be reborn again, this time as as Wylie Hotel.

Wylie Hotel is a project of Mainsail Lodging & Development, whose portfolio includes properties in Florida and the British Virgin Islands. Mainsail was attracted to this particular property because its Old Fourth Ward location means close proximity to Ponce City Market and the BeltLine Eastside Trail, says Alan Rae, general manager. Rae is familiar with chic, intown renovated boutique hotels, having opened the Hotel Clermont in 2018.

The building once housed Mrs. P’s in its basement, an LGBT-friendly restaurant that eventually became a gay leather and western bar the late 1960s. Wylie Hotel plans to have a basement restaurant dubbed Mrs. P’s Bar and Kitchen, which will serve Southern food. Rae says that future programming offered at the hotel may pay further homage to the building’s history. “We haven’t talked through the exact specifics but we’re thinking of a brunch-heavy focus [for the restaurant], and doing some things that kind of represent the former history of Mrs. P being in the basement of the building and hosting Atlanta’s first drag show,” says Rae. “So we expect it to be potentially a little bit flamboyant but definitely fun.”

The developers completely renovated the 111-room property, with a new look that Rae says is classic and charming, featuring a color palette with hues like blue, blush, clay, “green velvet,” and “sour cream.” Each room will have its own personal flair. The hotel will also feature touch-free check-in as well as an app, Intelity, that allows guess to “control their experiences.”

As for how Wylie sets itself apart from the nearby Hotel Clermont, “Well, we don’t have a club in the basement for a start,” Rae laughs. “We like to describe it as Hotel Clermont’s more sophisticated older sister. It’ll feel a lot more residential, a bit homey.” 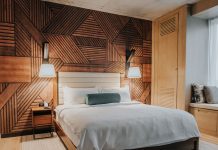