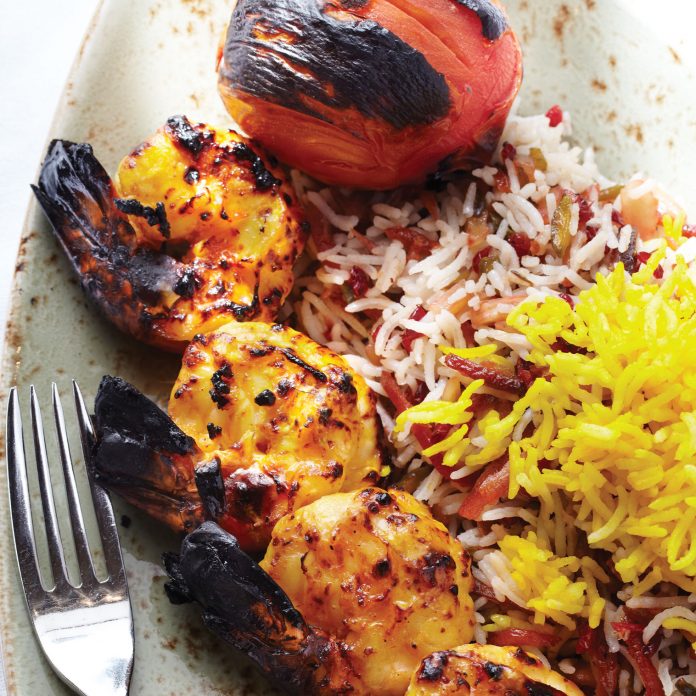 The parking lot of Rumi’s Kitchen is bedlam on a Saturday night. A line of luxury cars stretches into the street, and the driveway is so slender that incoming vehicles can barely squeeze around those trying to leave. A valet pulls up in one roomy sedan and then leaps away at full sprint to retrieve the next. Departing customers wait by the entrance under a shell-shaped art deco awning, the kind a starlet in a 1930s talkie might huddle under in the rain. The flattering lighting around the doorway obscures everyone’s impatient expressions.

Atlantans expect this kind of weekend gridlock at a steakhouse in Buckhead—but at a Persian restaurant in Sandy Springs? It attests to chef-owner Ali Mesghali’s precisely calibrated formula for Rumi’s, which he relocated a half block over in December: swank, buzzy atmosphere; attentive servers; and a meat-heavy menu with a whiff of the exotic. Mesghali has been fine-tuning his approach for fifteen years. He opened his first venture, Shamshiri, in 1998, around the time a Persian dining culture was beginning to flourish in Sandy Springs. There Mesghali mastered the art of taftoun, crackly flatbread—similar to Indian naan—served as a welcome with a platter of radishes, feta, walnuts, and herbs like mint and tarragon.

In 2000 Mesghali and a partner launched Persepolis, a more ambitious endeavor that drew local Iranian ex-pats and curious food lovers with its sensual menu: silky yogurt dips flavored with sun-dried shallots or cucumbers and herbs, marinated kebabs that run the gamut of proteins, and khoreshes—stews layered with the sweet and sour flavors that typify Persian cuisine. The food succeeded but the room was fusty, a two-tiered layout with columns and candelabra chandeliers. (It looks the same today, though Mesghali is no longer involved.) He also owned the short-lived Shiraz in Alpharetta, which offered a buffet format and sported a too-bright color scheme resembling an unfortunate Miami hotel makeover.

All the elements clicked when Mesghali opened Rumi’s Kitchen in 2006: He taught the cooks his honed recipes, and the atmosphere—chocolate browns and red-hot cinnamon hues, modern but understated—drew a crowd that embraced Persian cuisine in a finer-dining atmosphere. The name was apropos: Jalaluddin Rumi, the thirteenth-century mystic and poet, incorporated everyday foods—spinach, chickpeas, cabbage soup—and wine into his writings on spiritual ecstasy. (“Cook in that fire!/Bake like bread!/Soon you’ll be the prize of every table, the life-giving food of every soul.”)

Rumi’s intimate, seventy-four-seat space turned cramped when it was busy, and eventually its steady popularity began to strain the small kitchen. Last year Mesghali started eyeing a former Midas auto shop, just down the street from his original location, wedged between a Mellow Mushroom and an IHOP. It was huge: 6,000 square feet. Could he make it fly?

The answer is yes—though he brought in some credentialed help just to be certain. Mesghali hired the Johnson Studio to give the long, deep dining room a casual opulence. Sky-blue tile flows through the open kitchen, which includes two barrel-sized tandoor ovens. Leather banquettes surround live potted orange trees. Skylights around the ceiling allow plenty of sunshine at lunch; the glow cast by subtle rows of fixtures is seductively buttery at night. The space holds double the seats of the previous location, so two industry pros are consulting to help Mesghali adjust: Micah Willix, the longtime chef at Ecco who most recently helmed defunct Latitude in Phipps Plaza, is bringing the kitchen crew up to speed. Front-of-the-house smoothie A.D. Allushi, who just moved on from the Buckhead Bottle Bar & Bistro, is running interference in the dining room. (You’ll know him by his signature cockatoo haircut.)

The menu, as the restaurant settles into its new digs, presents what Mesghali knows he does best. Flatbread, so hot your fingers dance around it, quickly arrives with its accompanying platter of radishes and other nibbles. Use the bread to savor dips like kashk badenjoon—fried eggplant drizzled with cream of whey, dabbled with fried onions, and sparked with mint—and mirza ghasemi, sultry smoked eggplant punctuated with tomato and garlic. You might start with a lemony, cucumber-heavy salad; vegetables are scarce with entrees. Mesghali sometimes plays with Americanized presentations of traditional ingredients. For example, he layers squares of flatbread with grilled ground lamb, pickled red onion, roasted tomato, mint, and a lashing of yogurt: Voila, lamb sliders. I’m not usually keen on this kind of tinkering, but I admit the collusion of flavors holds savvy appeal.

The entree section is largely a kebab-o-thon. Shrimp; three variations of chicken, stained yellow from fragrant saffron; four cuts of beef (filet mignon, sirloin, tenderloin, and ground chuck); and lamb either ground or in chops are all pleasantly charred yet delicate in texture. Each comes with a snowdrift of rice—some plain, some sprinkled with fava beans and dill, or lentils or raisins, or puckery dried barberries. You’ll never finish all of it, but shape a separate pile and gussy it up: Smash the roasted tomato that appears on every plate into the rice, sprinkle it with the tart sumac a gracious server provides, pour over extra yogurt dip, or mix in a side of torshi, a Persian take on chutney that includes green chile and mango.

Desserts are largely Westernized: pot de crème infused with black tea and cardamom, a chocolate tart, vanilla ice cream tinged with saffron and rose water and sandwiched between two wafers. I prefer the saffron-orange tart with a shattery crust; it’s currently sold in the adjoining market (which is disappearing in favor of more seating) but will soon make its way onto the restaurant’s dessert menu.

All this adds up to approachable, satisfying meals, but I do yearn to sample a broader range of true Persian dishes. Rumi’s, Persepolis, Mirage a mile up Roswell Road, Sufi’s in Buckhead: They all serve such similar, kebab-heavy menus. In particular, I hanker to try more of the herbaceous khoreshes, rich with fruits and vegetables. I mentioned this to Mesghali. “I’ll be slowly working in new dishes with the familiar ones, so I don’t shock our regulars,” he said. He referenced the lamb neck braised in an herb and potato broth, a fresh addition to the entrees. That was actually my favorite dish from recent visits—the meat was so tender it had already toppled off the bone by the time it reached the table.

“Also,” Mesghali said, “if customers are interested in exploring Persian cuisine further, they can book the chef’s table and I’ll cook stews and rice dishes that aren’t on the menu. It’s possible to do things like that now that I have a large enough kitchen.” Count me first in line. —Bill Addison

Photograph by Greg Dupree. This article originally appeared in our April 2013 issue.