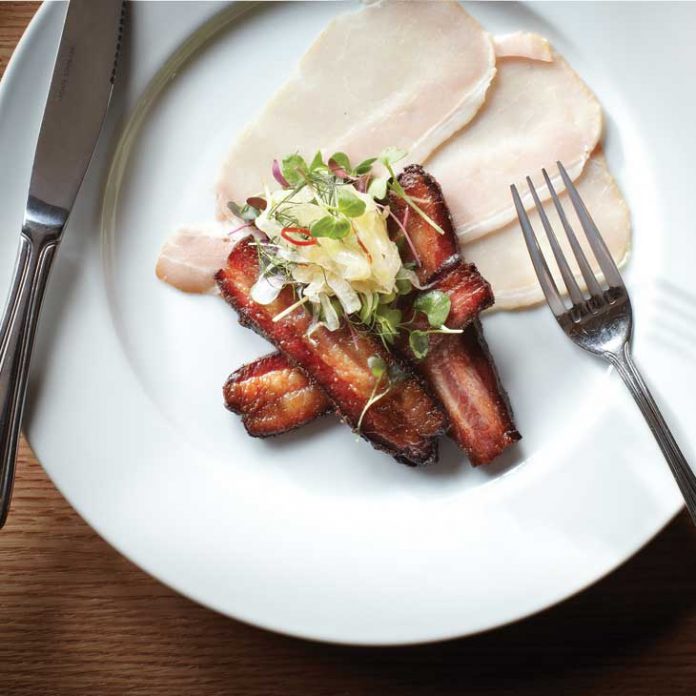 No genre of restaurant may be trickier to pull off in Atlanta than the wine bar. It doesn’t quite jibe with our character. In walking cities like New York and San Francisco, where wine bars flourish, they pop up as small, intimate hangouts—boozy versions of coffeehouses—or transform into cheffy showcases that glamorize charcuterie and dote on obscure wine varietals from France and Italy.

In driving cultures like Atlanta, where we tend to hunker down at one establishment for the night, light bites like salumi and cheese plates alongside glasses of Prosecco or Pinot Noir don’t suffice: We require heftier sustenance. Even Inman Park’s tiny Krog Bar, which serves forty to fifty wines by the glass, began in 2005 with a simple menu including chicken liver pâté and finger sandwiches but eventually wove stouter dishes like seared duck and garlic shrimp into the mix as well.

Then there’s the matter of taste. Right now we’re all about craft beer and bourbon cocktails. Wine, though not wholly rejected, often comes across as the foreign exchange student at a frat party. It needs a sympathetic translator.

Which is why, as a wine lover, I’m rooting for Phillip Cooper. He opened Vin25 at the end of August in the former Mittie’s Tea Room cottage just off Roswell’s Canton Street. Tall with a thicket of dark hair and an easy grin, “Coop” (as his regulars call him) has a J.Crew charm that can convince Chardonnay habitues to dabble in Austrian Grüner Veltliner or Sardinian Vermentino.

He began his restaurant career as a valet and bus boy at Ray’s on the River. But he’d always had a fascination with wine—his father is a Baptist minister, and as a child, he pretended the grape juice taken at communion was a fine Bordeaux—and he convinced owner Ray Schoenbaum to help pay for his sommelier training.

The chef at Vin25, Robert Rambo, was previously sous chef at Ray’s at Killer Creek in Alpharetta, where Cooper worked as wine director. The two would sit down after dinner shifts with plates of food and a bottle of wine to discuss ideal pairings, and Cooper knew he’d found the man to run the kitchen of the business he would soon open.

He also nabbed a smart location at the right time. Over the last five years, Canton Street has mushroomed into the metro area’s most boisterous restaurant row—think Virginia-Highland but with twice the foot traffic. The boom began with affordable drop-ins like Ceviche and Salt Factory pub. Slowly, though, more upscale efforts appeared, including Little Alley Steak, which opened this past February, and Southern-themed Table & Main, which launched last year. Crowds now fill their tables nightly too. Would there be enough interest in this already-congested scene for a wine bar?

The early answer is yes. Pull open Vin25’s knotty alder doors, embellished with ironwork that resembles treble clefs on sheet music, and you’ll find a cheerful gathering most any night of the week. A renovation removed all evidence of a Southern lunchroom: The space, which seats fifty-three including the welcoming bar, now evokes a wine-country hideaway, with a hodgepodge of woods and globe-shaped, bamboo chandeliers hanging over the center of the dining room.

Soon one of the professional but entirely unpretentious staffers will ask you what you’d like to drink, and the fun begins. Friendly options fill out the list of two dozen wines by the glass: Pinots from California and Oregon, Chardonnays from Russian River and Burgundy, Cabs from Napa, Sonoma, and, if you’re up for a more adventurous sip, Lebanon. Cooper also slips in some geekier Old World options like a minerally 2010 Chateau du Trignon Roussanne with aromas of peach and pineapple, and a 2005 Dehesa la Granja Tempranillo that tastes the way a blackberry patch smells after a summer rain.

My one initial complaint is that there’s not yet any bubbly by the glass on the list. Most of the wines by the glass go for $8 to $14, though the restaurant also houses a small Enomatic system for preserving and dispensing pricier wines. You buy a card from the restaurant with a set amount of money (like a gift card), insert it into the machine, and then sample from among eight bottles—say, a juicy Merlot blend from Bourdeaux sold for $3 for a 1 ounce splash, $9 for a half-glass, and $18 for a full pour. It makes for an entertaining DIY tasting flight and a table crammed with stemware.

Cooper knew that succeeding at a wine bar would mean offering a full menu of small plates and entrees. Ironically, the snacks—the classic couplings with vino—are the kitchen’s weak point. A couple of tidbits excel: Crisp, molten bacon and cheese arancini (fried risotto spheres) pair satisfyingly with sparkly, and a revolving selection of oysters matches the refreshing crispness of a Sauvignon Blanc.

But the cheese and charcuterie plate bores: A typical assortment includes two slices of duck ham, a scoop of fresh chevre, some cubed cheddar lightly smoked in-house, and several mild slivers of chorizo. At a time when Georgia purveyors are curing suave versions of ham and salumi, and local dairy owners are aging poetic, bloomy rind cheeses, this platter needs some regional verve to rescue it. Ditto the daily spreads, served on wan crostini that taste like grocery store baguette topped with snoozy pimento cheese or listless pâté.

The meal improves with a frisée salad topped with a poached egg, its yolk warm and runny, and draped with tequila-cured salmon. It gets even better when the entrees arrive. Steer toward meatier choices like a thick boneless pork chop, tender but with a desirable bit of chew, flanked with sauteed endive and, to contrast the bitterness, a chutneylike apple mostarda. Flatiron steak (a shoulder cut) arrives sliced, with a pile of fingerling potatoes pan-fried in duck fat nestled next to it—the model of a comforting bistro dish. I hope a recent special of lamb shank with astounding creamed cabbage, the flavors mellow and rich and unified, makes it onto the main menu.

Let Cooper suggest wine with dinner. Out of a list of nearly 120 bottles, more than half of them fall in the sweet spot between $40 and $70, and a dozen dip under that price. The man scrupulously avoids upselling: Every time I asked for a recommendation, he started with wines in the high forties. When I did splurge—on a fascinating, schizophrenic $80 Pleiades Lot XXI blend of nine grapes from California—Cooper told us about the eccentric winemaker, Sean Thackrey, and promised to buy it himself if we didn’t like it. We loved it. But it was a Tuesday on a busy week, and after he decanted the wine, I asked him to pour nearly half back into the bottle so we could take the rest home. “Just a bit more?” he asked. “It’ll go so nicely with the bacon-pumpkin doughnuts you ordered for dessert.” Sure, twist my arm. One more splash.  —Bill Addison

Photographs by Greg DuPree. This review originally appeared in our December 2012 issue.