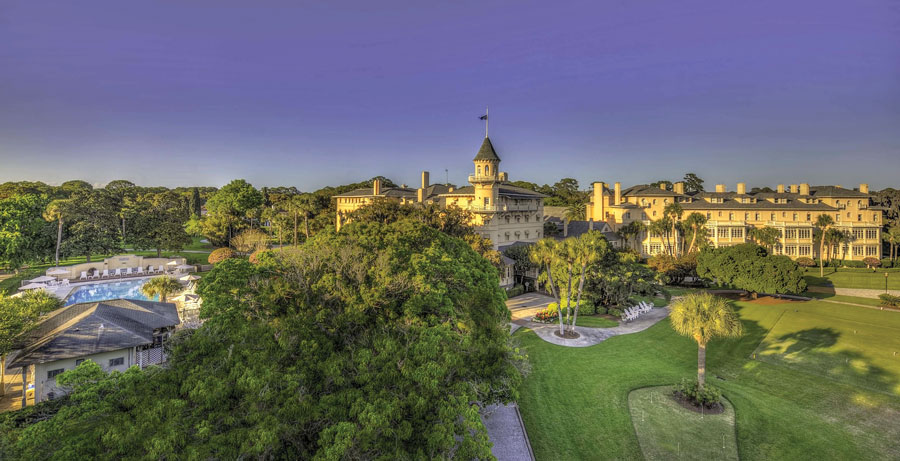 The wildly popular series Downton Abbey recently wrapped its six-year run on PBS, and diehard fans like me have begun contemplating life without the intrigues of the Crawley clan. For those unfamiliar with Downton, the series centers on life at a great English estate saved from ruin by the marriage of Robert Crawley, the Earl of Grantham, to American heiress Cora Levinson. While the story is fictitious, there are many real-life tales of wealthy American women who married into the British aristocracy at the turn of the twentieth century, providing much-needed infusions of funds into ancestral estates. You don’t have to watch a period drama to tune into their worlds; on Jekyll Island, Georgia, that glittering era has been carefully preserved in numerous historical structures, most notably the Jekyll Island Club Hotel.

Built in 1886 as an enclave for America’s elite, the hotel served as the winter playground of Rockfellers and Vanderbilts, Pulitzers, Morgans, and Astors—a Who’s Who of the Gilded Age—for decades. Thirty years ago, the hotel was restored to its former grandeur, and today all are invited for a stay at what was once the country’s most exclusive club.

The resort’s 157 rooms and suites are spread among five historical properties. In addition to the iconic 1888 Clubhouse, a stately American Queen Anne structure complete with a flag-topped turret, guests may book a stay in Sans Souci, a luxury apartment building erected for club members in 1896, or the Annex, a 1901 addition to the Clubhouse. Two former residences, Crane Cottage and Cherokee, offer guest rooms in more intimate settings, making them a favorite of wedding parties and extended families.

Around the hotel, a dozen historical family homes known as “cottages” comprise a National Historic Landmark District. There are several ways to explore them, including guided walking tours, ghost-themed trolley tours, and narrated horse-drawn carriage tours. Most guests opt for the ninety-minute Passport to the Century tram tour, which transports riders through the 240-acre district and includes docent-led walks through selected cottages, usually Mistletoe, Moss, or DuBignon.

Some cottages now house art galleries and gift shops. One, a rambling, shingle-style Victorian owned for a time by Joseph Pulitzer (it later became the club’s infir-
mary), contains a collection of shops selling everything from books and beachwear to gourmet foods and toys. Another, the Italianate Crane Cottage, is the setting for an enchanting al fresco restaurant, Courtyard at Crane, the perfect place for a leisurely lunch. Try the beer-battered local grouper and the artichoke-and-shrimp pasta featuring fresh Georgia white shrimp.

Spend the afternoon playing croquet on the immaculately manicured lawn or opt for a round of oceanfront golf on the historic Great Dunes nine-hole course, whose links were originally laid in 1910. I decided to partake in another popular pastime of those bygone days, biking. The hotel offers bicycles for rent, and twenty-two miles of paved trails wind past beaches, through maritime forests, and past the grand houses of the historic district. I took a break at Driftwood Beach, the island’s most popular photo op, to snap a shot of the hauntingly beautiful graveyard of fallen oaks, whose sun-bleached bones litter the shore. After my excursion, I retired to the Riverview Lounge off the hotel’s Grand Dining Room for high tea, complete with rocking chairs and views of the marsh along Jekyll Creek.

Dinner in the Grand Dining Room was an elegant affair. Ionic columns, intricately carved fireplace mantels, and flickering candlelight conjured the romance and magnificence of the club’s heyday. (Note: Gentlemen are asked to wear jackets, though collared shirts and slacks are acceptable; for the ladies, dresses, skirts, or pantsuits are preferred.)

After a nightcap at the lobby bar, I repaired to my room, furnished in fine Victorian style, to reflect on my day in the life of an American tycoon—and to begin hatching plans for the remainder of my stay on this Gilded Age island where the great families of yesteryear continue to hold sway. Roanoke Island, North Carolina
This Outer Banks island was the site of the first English colony in the New World. Founded in 1585, Roanoke predated the establishment of Jamestown by twenty-two years and the Pilgrims’ landing at Plymouth Rock by thirty-five. Learn about the island’s settlers at Fort Raleigh National Historic Site, and watch a dramatic retelling of the founding and disappearance of the settlement during The Lost Colony, performed nightly at the on-site Waterside Theatre. Stroll the neighboring Elizabethan Gardens and check out statues of Her Majesty Queen Elizabeth I and Virginia Dare, the first child born of English parents in America. Drive a few miles south to the Manteo waterfront, which evokes a New England seaside village at the turn of the last century. Browse the shops and galleries, pay a visit to Roanoke Island Maritime Museum, then check in at the White Doe Inn, a 1910 late Queen Anne–style home with bedchambers featuring period antiques and reproductions. outerbanks.org 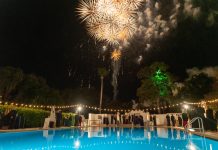