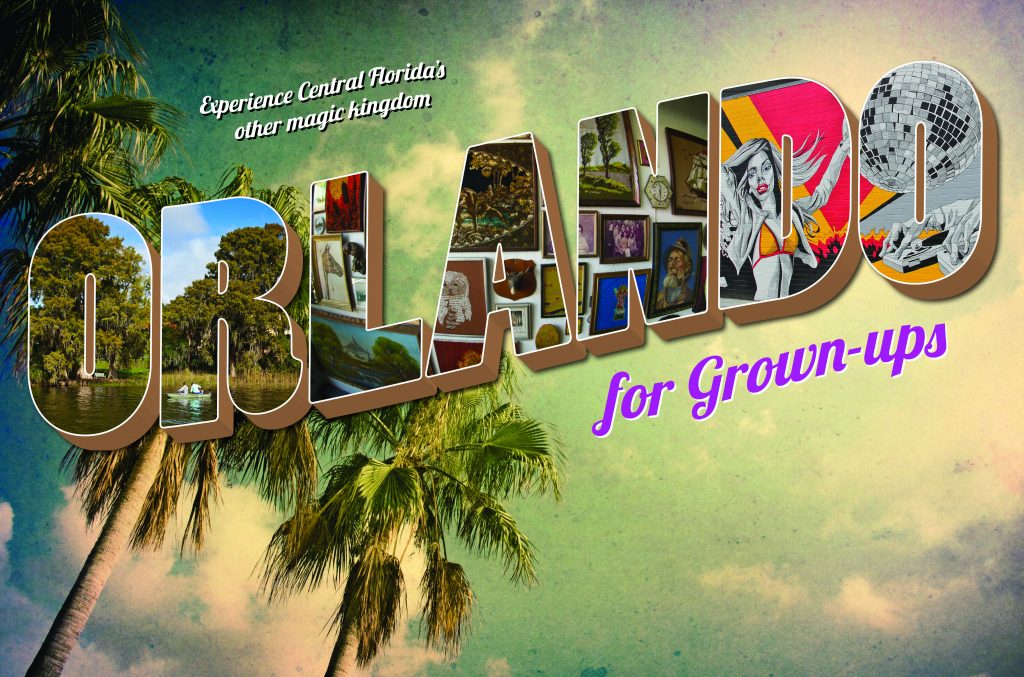 Orlando, to most, is the sum of its theme parks: mouse ears and roller coasters, killer whales and an iconic castle. And those parks are great. I grew up in nearby Maitland, Florida; on Sunday afternoons, my family and I would flash our season passes at Epcot, Hollywood Studios, and the Magic Kingdom, where we’d wave at the characters and hop on rides. I bet I spent more time with Mickey than I did with my cousins. He and I remain on a first-name basis.

But Orlando is far more than its parks. The city and its surrounding communities are a vacation destination in their own right, with decidedly grown-up appeal. You know what’s just as much fun as Disney’s beloved ride “It’s a Small World”? A pontoon tour of Winter Park’s chain of lakes. What’s more appealing than standing in long lines for food? Sampling your way through Orlando’s new indoor farmers market in the Audubon Park Garden District. And what’s just as quaint as Disney’s Main Street U.S.A.? Downtown College Park, lined with mid-century architecture, busy bike lanes, and old-fashioned sweets shops.

Come explore some of the coolest corridors within Orlando’s other magic kingdom.

A journalist friend of mine recently visited Winter Park for a story. “I want to retire there,” he told me wistfully, “after I make a few million.”

Winter Park is indeed the stuff of fantasies: beautiful enough to fall in love with, ritzy enough to be out of the average Joe’s league. Located seven miles northeast of Orlando, Winter Park was founded in 1887 as a winter retreat for wealthy Yankees. Its most celebrated street is brick-paved Park Avenue, which dead-ends into Rollins College. On one side of the avenue is the lovely park for which it is named; on the other are high-end boutiques, such as Lilly Pulitzer and Eileen Fisher.

Browse the shops (don’t miss Tuni, a locally owned mainstay with trendy women’s clothing), and break for lunch at Prato, an Italian eatery that reigns as the avenue’s “it” restaurant. It’s helmed by none other than Brandon McGlamery, former chef de cuisine at Atlanta’s acclaimed Bacchanalia. Order the much-ballyhooed Prato Meatballs made with braised veal and sip a glass of Casanova di Neri Sangiovese. Or for a more casual lunch, try 4 Rivers Smokehouse, a Winter Park–based chain that dishes Southern pulled pork and smoked jalapeños directly onto your paper-lined tray.

Park Avenue is the site of The Charles Hosmer Morse Museum of American Art, home to the world’s most comprehensive collection of works by Louis Comfort Tiffany, the famed stained-glass artist. Don’t miss the Tiffany Chapel exhibit, a stunning mosaic-and-glass chapel interior he created for the 1893 World’s Columbian Exposition.

Make time for Winter Park’s Scenic Boat Tour, which departs hourly a block from Park Avenue. Climb aboard a pontoon and explore three lakes connected by two canals built in the 1880s to transport pine. As you float along, your guide will point out ginger plants and banana trees, a 350-year-old live oak, and wild bougainvillea. You’ll also see several mansions designed by noted architect James Gamble Rogers.

While you’re in Winter Park, don’t miss Cask & Larder, located in a former saloon a few blocks from Park Avenue. It’s the second concept from Chefs/Owners Julie and James Petrakis, whose work at their first Winter Park restaurant, the Ravenous Pig, earned them several James Beard nominations. At Cask & Larder, they’ve jumped on Orlando’s craft brewery bandwagon (just five years ago, the city claimed ten; now there are around twenty-five). Order the coffee-rubbed rib eye with hash browns and my favorite of the nine house brews, the hoppy Summit Smash.

A HOTEL THAT MAJORS IN ART
Winter Park used to be short on accommodations, but the newly opened Alfond Inn solves that problem. Owned by Rollins College, the 112-room luxury hotel is decorated with a rotating collection of works on loan from the college’s Alfond Collection of Contemporary Art. Black-and-white photographs of the campus hang on guest room walls, and profits go toward student scholarships. Try the rustic American fare at the hotel’s restaurant, Hamilton’s Kitchen; Orlando Life just named Chef J. Christopher Windus the city’s “Best New Chef.” thealfondinn.com Ivanhoe Village Banner District weaves around Lake Ivanhoe’s eastern shores, which are visible from I-4 just north of downtown. In 1910, this area was an amusement park (nope, Walt’s wasn’t the first); it later became a bohemian row for furniture and antiques dealers. Recently, these stores were joined by a fresh crop of bars, restaurants, and curiosity shops, luring visitors who aren’t necessarily interested in a new sofa.

The area’s old and new guard come together at The Imperial, a furniture store turned wine bar and beer garden. It’s the brainchild of district shop owner John Washburn, who struggled to sell his Asian tables and chairs during the recession. He installed a hand-carved bar in his store and began serving libations that guests could sip while admiring and even sitting on his furnishings. Business has never been better.

Also check out Boom-Art, where two former circus clowns sell hand-painted pop art on a range of merchandise, from plates to suitcases. Purchase Wonder Woman bottle cap earrings just for fun, and celebrate with a house-made cinnamon roll at White Wolf Cafe, a local mainstay cluttered with antiques and stained-glass lamps (many for sale).

Travel a few minutes west, crossing beneath I-4, and you’ll find yourself in College Park, home to streets named Princeton, Yale, and Vassar. In parts of College Park, brick roads wind around stately homes that rival Winter Park’s.

The main drag, Edgewater Drive, is lined with a number of mid-century buildings. A few years ago, a group of forward-thinking residents petitioned the state to convert the road from four lanes to three, add bike lanes, and increase parallel parking spots. The result is a lively 1.5-mile strip that teems with shoppers, dog walkers, and bicyclists.

Get your banana split fix at the newly opened Soda Fountain, with a 1950s feel and chalkboard walls. If you want a truly old-school College Park experience, grab a cheesesteak at Gabriel’s Sub Shop, open since 1958. Perk up with an espresso from Downtown Credo, which lets customers name the price of their caffeine fix. Proceeds from the nonprofit coffeehouse benefit local charities.

A LOCAL FAVORITE NEAR THE THEME PARKS
Try the restaurant that inspires Orlando residents to brave the tourist traffic: Deep Blu. Located inside the magnificent Wyndham Grand Orlando Resort in Bonnet Creek, this spot guarantees that any seafood you order has been in the kitchen less than thirty-six hours. In 2013, Orlando magazine readers voted it best hotel restaurant, best seafood, and best service; they also named Chef Cory York best chef. Order the delicately fried crab cake, followed by a spicy cilantro roll. For your entrée, try the George’s Bank sea scallops blackened and a side of roasted mushrooms. deepbluorlando.com These districts northeast of downtown blend vestiges of the past with glimpses of the future. Traditional and trendy stand side by side, luring visitors of all stripes.

Little Vietnam—or Mills 50, the district’s official name—came to life in the 1970s, thanks to a boom of Vietnamese refugees. This neighborhood is significant: According to the 2010 census, Florida has the fourth-largest Vietnamese population in the country, with Orlando claiming the most Vietnamese residents of any city in the state.

The district’s most celebrated achievement is East End Market, a new indoor farmers market located in a repurposed 1962 church. The 14,000-square-foot space includes a dozen local merchants, an incubator kitchen, a full-service restaurant, and a working garden outside.

Another hotspot is Redlight Redlight Beer Parlour, a pioneer of Orlando’s craft-beer movement. This large, gritty joint has twenty-six rotating drafts and 250 bottles, including vintage beers and more than fifty sour beers. If you can’t make it to Cask & Larder in Winter Park, you’ll find several of their beers here.

While you’re in the area, check out Park Ave CDs, a Winter Park transplant that settled in Audubon Park years ago. Find rare LPs, vinyls, and a wide selection of independent and international music. Also stop by Stardust Video and Coffee, a neighborhood hangout since 1970. Grab a coffee or scotch and browse more than 10,000 independent video titles.

This story earned an Honorable Mention in the Society of American Travel Writers’ annual Eastern Chapter contest in the single-destination story category.