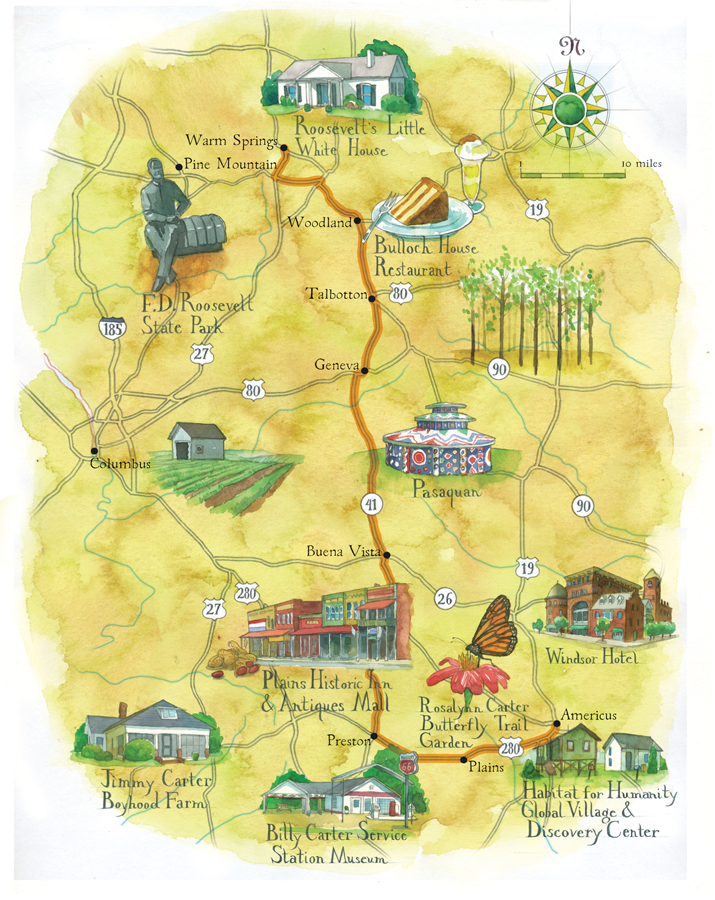 A largely rural expanse extending from the peaks of the Pine Mountain Range to the farmlands of Plains, west Georgia is known for its pine forests, pecan groves, and peanut fields. It’s also linked to two American presidents with deep ties to this land. The personal histories of Franklin D. Roosevelt and Jimmy Carter are central to the story of the region, so much so that the area is known as Presidential Pathways. In Warm Springs, where Roosevelt constructed his Little White House, the polio-stricken president bathed in the town’s namesake mineral waters and came to know fellow patients from all walks of life, as well as the people who called the farming community home. In Plains, where Carter grew up (and still lives), he learned the small-town values of honesty, hard work, close-knit community, and commitment to family. Roosevelt’s Little White House
Roosevelt made his first of forty-one visits to Warm Springs in 1924 in hopes of finding a cure for the crippling effects of polio. In 1932, he built a small six-room cottage here, which came to be known as the Little White House; it’s where he died of a cerebral hemorrhage on April 12, 1945. In addition to a self-guided tour of the home, visitors find an expansive museum showcasing thousands of pieces of memorabilia, including FDR’s 1938 Ford with hand controls. Exhibits showcase how the common people Roosevelt met in Georgia influenced his New Deal programs, such as the Rural Electrification Administration. gastateparks.org/littlewhitehouse F.D. Roosevelt State Park
Visitors to Georgia’s largest state park, located in Pine Mountain, are often surprised by the mountainous landscape, which draws hikers and backpackers to its forty miles of trails. Roosevelt loved these peaks, particularly Dowdell’s Knob, the highest point on the Pine Mountain Ridge, topping out at 1,395 feet. Today, a life-sized statue of FDR sits on the overlook, just yards from the stone grill he had built for his rather formal picnics, which featured linen-draped tables and silver servingware. The setting was also a place of quiet contemplation for the president, who visited it just two days before his death. gastateparks.org/fdroosevelt

Bulloch House Restaurant
After this beloved Warm Springs restaurant burned to the ground in 2015, it reopened in temporary downtown digs (the owners plan to rebuild in the next year or two). Blessedly, the menu of Southern favorites and the irresistible buffet—nearly half of which is dedicated to fresh-baked breads and fried foods, from chicken and catfish to tomatoes and apples—remain intact. Musts include chicken and dressing, baby lima beans, banana pudding, and caramel cake. Following lunch, stop in at the restaurant’s sister gift shop, Fireflies, a couple of doors down. bullochhouse.com

Pasaquan
Roughly halfway between Warm Springs and Plains lies the little town of Buena Vista. On its outskirts, visitors find one of the most significant folk art sites in the United States. After years spent in New York, visionary artist Eddie Owens Martin (known as St. EOM) returned to his native Georgia in 1957 and began a thirty-year transformation of his late mother’s house into a seven-acre art installation. A recent restoration project has returned the site’s six structures, 900-foot painted masonry fence, sculptures, and totems to their Technicolor glory, and Pasaquan reopens to visitors this fall. art.columbusstate.edu/pasaquan.php

Plains Historic Inn & Antiques Mall
President and Mrs. Carter played active roles in the transformation of a former Plains mercantile into an antiques mall and inn. He helped construct the walls; she selected period pieces to furnish the seven themed guest rooms, each representing a decade from the 1920s to the 1980s. The attention to detail is impressive: Even the periodicals in each room date to the decade it represents. After checking in, stroll down Main Street to Plains Trading Post, one of the largest political memorabilia dealers in the South, and Plain Peanuts, home of the must-try soft-serve peanut ice cream. plainsinn.net

Jimmy Carter Boyhood Farm
Carter’s childhood home in the nearby community of Archery is a great first stop on your tour of the Jimmy Carter National Historic Site, which also includes the Plains High School Museum and the town’s historical railroad depot. Carter’s recorded remembrances of his childhood bring to life the Sears & Roebuck mail-order house in which he was raised, as well as other structures, including the family-run commissary. Continue on to the high school, which he and Mrs. Carter attended, and snap a photo at the reproduction Resolute desk Carter used during his time in the Oval Office. Then stop by the depot, which served as Carter’s 1976 presidential campaign headquarters. nps.gov/jica

Rosalynn Carter Butterfly Trail Garden
In 2013, after reading about the plight of monarch butterflies that had lost host and nectar plants along their migratory routes, Mrs. Carter decided to plant beneficial species in her own garden in Plains. She also partnered with local educator Annette Wise to establish a butterfly trail to encourage the planting of public, private, and school gardens in Plains and, ultimately, around the world. Today, more than a dozen of her namesake gardens have taken root in Plains (and more than 350 globally). The largest public garden in town is located on the grounds of the Georgia Visitor Information Center, where visitors can see monarchs and other species at different stages in their life cycles. jimmycarter.info/butterfly-trail

Billy Carter Service Station Museum
An unassuming two-pump gas station opposite Plains’s downtown strip buzzed with activity in the late seventies. Purchased by First Brother Billy in 1972, it became a favorite media hangout during the Carter presidency and welcomed visitors from around the world. In 2008, the station was renovated and reopened as a museum. Today, it exhibits memorabilia, from an invitation to President Carter’s inaugural ball to the overalls colorful brother Billy wore during a 1978 appearance on Hee Haw. You’ll also find priceless cans and cases of vintage “Billy Beer.” plainsgeorgia.com/billys_station.html

Windsor Hotel
Built in 1892, the Windsor Hotel wows guests even before they walk through the doors. The grand hotel commands a city block in downtown Americus, and its impressive turret and tower rise high above the town. Inside, the soaring three-story atrium reflects Victorian and Moorish influences and boasts hand-carved oak woodwork and heart pine and marble floors. Plan on dinner at the hotel’s elegant restaurant, Rosemary & Thyme, furnished with plush banquettes and armchairs, potted palms, and faux gas chandeliers. Then retire to the veranda off Floyd’s Pub for a nightcap. windsor-americus.com

Habitat for Humanity Global Village & Discovery Center
Habitat for Humanity’s most famous volunteers, President and Mrs. Carter, began their association with the organization in 1984 as a means of continuing their work on social justice and human rights issues. At its global headquarters in Americus, visitors learn about the history of the organization and tour dozens of life-sized replicas of Habitat houses from around the world. Each structure is unique, reflecting the represented nation’s distinct culture, building materials, and construction methods. habitat.org/gvdc