Raised by a teacher and a hairdresser in Luttrell, Tennessee, the eight-time Entertainer of the Year sees himself as a champion of the simple life, where bank accounts might be smaller but problems are too.

“An awful lot of people lead lives where, sure, they work hard, but they’re really happy where they are,” says Chesney, forty-nine. “To me, that’s the beauty of life.”

With sixteen studio albums jammed with hits that value celebration over aspiration, Chesney is president of the No Shoes Nation, a massive fan base who pack his sold-out concerts and know all his lyrics by heart. When Chesney sings about a “Keg in the Closet” of the Lambda Chi house, they get that he’s referring to his escapades at East Tennessee State. And when he serenades them with “The Tin Man,” they know it’s the ballad that convinced Capricorn to offer the struggling musician his first record deal in 1993. “My audience really started forming when I stopped cutting songs people said were ‘hits’ and started cutting songs that were my life,” Chesney says.

His most recent album, Cosmic Hallelujah, takes a wistful look at how things ought to be. Chesney wrote the first single, “Noise,” while rushing to a meeting; it decries the chaos of our fast-paced, high-tech culture. “And it reminds you, I hope, there’s this beautiful world out there, if you’ll just put your phone down,” he says.

It’s a world he loves to sing about—especially the sandy parts by the ocean, where the drinks are bottomless and shirts and shoes optional. Chesney grew up vacationing with his family in Virginia Beach, and to him, mountains are where you live, and beaches are where you relax. “I’d like to think I haven’t met a beach I didn’t like,” he says, rattling off the Florida Keys, Daytona, and the beach at the Flora-Bama restaurant in Pensacola, Florida, as his other favorites. (As fans know, he even wrote a song called “Flora-Bama.”)

When he’s not at the beach, Chesney can often be found writing and recording in Nashville, his hometown since 1990. The city has exploded since he moved there (“I hardly recognize it as the place I came to with a headful of dreams and a cheap guitar,” he says), but Chesney still sidles up to the counters of the same meat-and-three joints that fed him when he was a struggling musician. The folks at Arnold’s Country Kitchen, the Pie Wagon, and Monell’s pay him no mind: He’s just another paying customer wolfing down collard greens and creamed corn.

When friends come to visit, Chesney tells them to check out the Country Music Hall of Fame and Ryman Auditorium. He also recommends attending a recording of the Midnite Jamboree at Ernest Tubb Record Shop. “And if you love guitars, you have to go to Gruhn Guitars,” he says. “People fly from all over the world to see it.”

But Chesney himself is not much for flying these days. Between heavy promotional duties for Cosmic Hallelujah and signing mementos for countless fans (unlike many artists, Chesney still inks every autograph himself), he’d rather spend his downtime in East Tennessee, where his family still lives. “I get back more than people think,” he says. “I use it as a place to disappear.”

For Chesney, returning home reminds him of a song he sings on tour, a Mac McAnally tune called “Back Where I Come From.” “It talks about pride in where you’re from, how you never stop being that person from the place where you grew up,” he says. “I think that’s so true, and it’s one of the things I love about being a kid from East Tennessee.”

“It’s the honky-tonk capital of the world.”

“This is where the hipsters and creative people are—though 12 South is pretty hip in a whole different way.”

“This area, as I knew it, is almost gone—but Hillsboro Village has stayed almost the same.” Last September, when Kenny Chesney announced he would take a break from touring this summer, fans were crushed. But the diehards can still get their Kenny fix when Chesney makes an appearance at the Carolina Country Music Fest, held June 8–11, 2017, in Myrtle Beach, South Carolina. For Chesney, who says he “lives to be on stage,” it will be a welcome opportunity to perform. “Fans can expect a whole tour’s worth of energy in one night,” he says. carolinacountrymusicfest.com 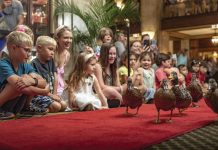 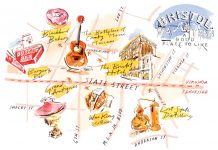 Where to eat, sleep, and shop in the twin cities of Bristol, Tennessee, and Bristol, Virginia