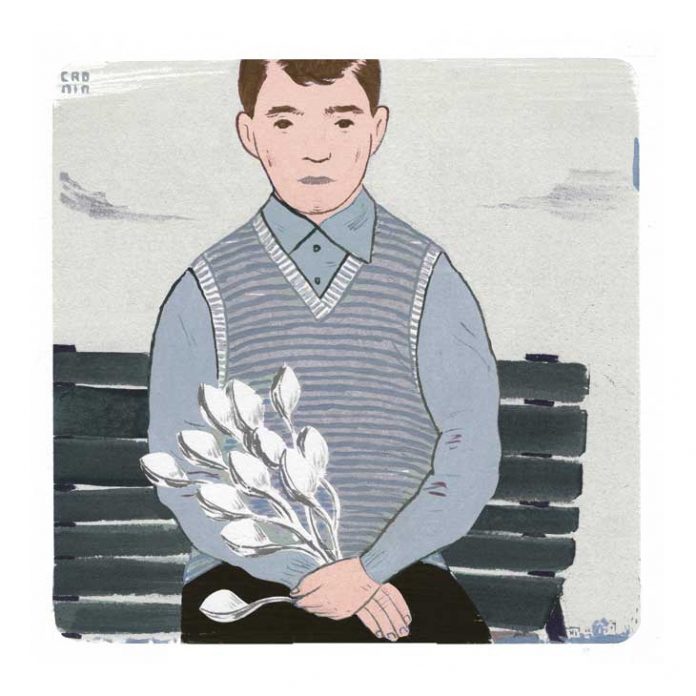 We called her grandmother. Never Grandma or Granny. To my father, she was simply Mother. Mom, if he was mad. My uncle sometimes called her The Nazi, but never to her face. It was a handsome face, more than pretty: Germanic features, hard mouth, but mirth in the eyes. Paired with her social charms, that face earned the title of May Queen at Washington Seminary, the old girls school on Peachtree. Grandmother was a debutante-jock: a three-sport star who won trophies well into her sixties, when she finally fell on the tennis court, chasing a lob, breaking her hip. She won that point—her last point, she told me much later.

The tennis court was the easiest place for Grandmother to say “love.” As in, “Love, Fifteen,” or “Love all.” She rarely said “love” to her children, and didn’t say it to me much either. But I felt it when she sang “Molly Malone” before bed when I was young, and later when she wrote me long, funny letters to which I was to reply only with an update on my “love life.” (I made up a romance, at least once, to entertain her.) She also wrote that word, “love,” on a card that I carry in my wallet nearly a year after her death last January at ninety—from old age, weak heart, steely resolve. It says: “Be Kind. Be Honest. Know at all times that I love you very much.”

Though he deserved a card with those words, as any child does, my dad never got one from Grandmother. And to the end of her life he resented that lack of love, which he made sure his sons never felt.

At a dinner at her Buckhead retirement community, less than a year before her death, Grandmother told a story that embarrassed Dad. She was good at that. Afterward Dad said to her, with unusual directness, “Mom, can’t you say something about me that’s positive for once? Tell a nice story about me?” She was quiet, almost flustered. How, I thought, could she not think of one?

Dad was the most responsible of her four children—the only one who completed college, had a career—so he was entrusted with the piece of paper stating her final wish, written in her unmistakable cursive hand: to be laid to rest in twelve places around Atlanta that she loved, her ashes scattered with silver spoons.

It was more of a last demand, really, than a request. Twelve places, she’d insisted. That imperative got some laughs at her funeral, during the lively, smiling eulogy Dad gave: “If you see us tiptoeing around the Piedmont Driving Club’s tennis courts with an urn, you’ll know what we’re up to . . . ”

But the laughing ended there. Her three surviving children didn’t want to do this scavenger hunt with their mother’s remains. My uncle was conveniently in New Mexico; my aunt attended, but with great reservation, discomfort, and unwillingness to disperse the ashes; my father, dutiful eldest son, arranged it all, but was anxious to be done with the task, rid of the remains and the demands of their former owner.

Me? I wasn’t looking forward to the predictable awkwardness, but I wanted to see these places she loved, whatever remained of her Atlanta, and to be with her one more time. I loved Grandmother very much, despite her failings.

I loved that she saved her old “hip screws” in a Tupperware container I inherited, with a note that said “Sharp!!!” I loved that she wrote a funny poem defending her face-lift, which included the lines: “Loves, tears, joys, fears, will show in a woman’s face / No matter how she tries to erase, erase, erase.” She wore a wig to church in her later years, and I loved that she laughed when the wind blew it off, my brother and I chasing the rodentlike thing across the street. I loved that she ultimately questioned her belief in heaven as she neared the end, when that question must be hardest. That she told me to have “lots of girlfriends” and earnestly asked my brother about drugs. I loved how blunt and self-secure she seemed; these things I was not.

But I recognized how difficult it must have been for Dad and his siblings to have a mother from whom “love” came out—when it did—like a command. A woman who charmed strangers, chaired a program for latchkey kids, but left her family with certain characteristically Southern silences.

Grandmother’s fourth child, a boy memorialized in my middle name, died long before I was born, when he was a teen. How? I never heard, though it was sudden, maybe suicidal. His father, the grandfather I never met, who had my first name, drank himself to death not long after this passing: vodka through a straw.

Outwardly I never saw a trace of what these tragedies did to Grandmother. But maybe they had something to do with why she showed her grandchildren—sixth-
generation Atlantans, of whom she was very proud—a little more love.

Six of us stood in the carport outside her old back door in Ansley Park last July, as we had on Christmases, Thanksgivings, and the New Year’s Days when she’d urged us to eat black-eyed peas for good luck. Everyone but my aunt took a silver spoon; her son would do it for her. We walked to the front yard and quickly, silently, one at a time, dipped the spoons into the strangely small plastic bag that held her remains, removing the white powder, in which I could see bits of bone.

Over us stood a prehistoric oak that I used to stare at from her sunroom, where we played solitaire, side by side, at an antique table.

Her bright-eyed younger sister, smiling, ladled her onto the ivy. I cast the ashes onto the ivy, too, with a forehand stroke. My younger brother carefully placed his spoonful on the tree’s roots, as did my cousin. My father released his larger share of her bones with a silent half volley into the air.

The ivy and tree now sprinkled with dust, we walked to our cars. Someone coughed; I wondered if we’d inhaled her.

She was born in a yellow two-story house on Seventeenth Street that was built by her father, who worked for Southern Bell. The door was never locked, and she wandered in and out with her five brothers and sisters, riding bikes, wandering the woody block, watching movies at a theater nearby. Years ago, the day before it was demolished to become a parking deck, a cousin visited the house and told a worker that it had once belonged to his family, that he’d be interested in buying it, in fact. “Well,” said the man, “it ain’t gonna be here tomorrow.”

It wasn’t clear where to spoon her ashes, so we picked a street corner.

We scattered her onto the flanks of an ancient oak outside Spring Street Elementary School, where she attended kindergarten through sixth grade. We did the same at the intersection of Peachtree and Tenth streets, where a theater once stood near the Margaret Mitchell House, and Tarzan serials showed for ten cents every Saturday afternoon. And at the Neel Reid house on Cherokee Road in Buckhead, bought for $27,500 while she was going to Washington Seminary. A few years later she walked down the pebble driveway in her finest dress, heading to her debut.

She married my grandfather and moved into Castle Pines Apartments on Muscogee Avenue, where they were residing when my father was born; we left some of her remains there, and on the clay courts of the Driving Club when no one was looking. Then a small house on Westminster Drive in Ansley Park, where they moved before my living uncle was born.

Had we obtained permission? “No,” Dad said, pouring ashes anyway. A curtain parted. We hurried back to the car.

Then the two-story Georgian Revival on The Prado, the family’s home for twenty-three years: four children, a maid, ten dogs. An upstairs window from which a burglar jumped, chased by a teenage uncle back from Vietnam. A driveway out of which my fifteen-year-old father edged his parents’ car one night to meet a girl. July parties that caused Grandmother to sweat through her dresses, despite taking sweat-suppressant pills. A funeral gathering for a teenage boy, his father unable to speak. We left her in the grass, the stories swirling through my head.

There was her church too—First Presbyterian on Peachtree Street, where I went to Sunday school—and a third Ansley house, on Inman Circle, where she lived her later years alone, where I played cards with her under the ancient tree. And finally we spooned what ashes remained onto her stone at Arlington Memorial Park, where her deceased son and husband waited. It had been mostly silent over the two hours we took. And it was even quieter here, where the labor of love and duty ended.

I tried once again to make sense of what it meant to be a sixth-generation Atlantan, a distinction that made Grandmother so proud. One thing I knew it didn’t mean was forgetting. Sweat trickled down my back, and I saw that my father, wearing dark glasses, was drenched. With sweat or tears, I couldn’t tell.

Illustration by Brian Cronin. This article originally appeared in the November 2012 issue.