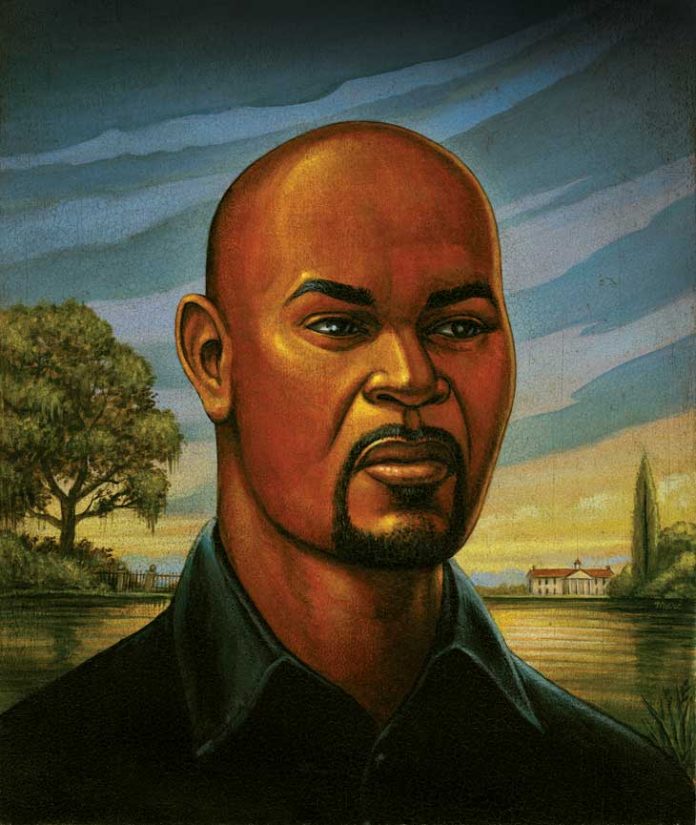 The south holds memories of my people. Beneath blistering suns and torrential rains, we toiled that someone else might prosper. We cleaned homes and loved children not our own. We prayed for the day we, too, might be part of the privileged class—those elite ones whose whiteness afforded them every opportunity.

But most of all, we knew the land of the South. We worked it for generations, almost for free. We knew its grainy composition and its nutritional substance. In many places, we ate it when fruits and vegetables were out of season. In Georgia, it carried a red tint, like burnt link sausage; in Mississippi, it was dark like us and just as sweet; in Louisiana, the land was tan and crumbled in our hands; in Arkansas, it was gray and salty, pungent to the palate. But the land sustained us. We gave thanks.

It spoke, the land did, of atrocities witnessed but never healed. It told of women assaulted in Southern mansions where they’d worked for forty years but still couldn’t quit. The land also told of men, proud and strong, hanged from trees because they dared believe they were men. It cried and rumbled when their blood oozed across its surface. It absorbed that blood and hid it, promising to tell the story when the children of those men forgot. We were the land and it was us. We danced upon it, barefoot, and it supported us gladly. We buried our dead in it in unmarked graves, because there was no money for memorials. We picked its enormous cotton bolls from September to Christmas and made some invisible man rich. We knew we were worth more than we received. But our time had not yet come.

Jim Crow laws, the Klan, segregation, and plain ole mean folks tried to make us leave. They tried to convince us the South did not belong to us, that we were people of some faraway land. But if not us, who did Southern land belong to? It was our tears that mingled with the rain and moistened the earth that grew crops and made the South the envy of the Industrial Age.

We prayed to our God for the transformation of white Southern hearts. After many years, God heard our cries. So now how can people question whether we belong? Who can say we are not Southerners?

My great-great-grandfather purchased 500 acres of land in rural Arkansas and left it to his family as the only inheritance, he said, we’d ever need. “If a man has land,” he reportedly said, “he has everything.” We still live on that land. As a child, I recall having very few possessions but always eating abundantly. I longed for possessions because my friends boasted of theirs, but now I’m grown, I have friends who long for the land. Together, as children, we wandered the banks of creeks and streams, skipping rocks until we had the art perfected. During the summer, we’d meet at someone’s pond and surrender our clothes and dash into the water like mud tappins. A few learned to swim by mimicking kids we saw on TV. Most of us never learned; we simply played in shallow water. When hunger approached, we made our way to someone’s orchard. There were always orchards: peach, plum, pear, apple. Or fruits found in the wild: muscadines, blackberries, strawberries. It was hard to starve in the country. We never talked about it, but as children we believed the country was ours. We’d heard stories of our people’s labor, how they’d worked from “can’t see ’til can’t see,” and in our hearts that meant they’d paid for our inheritance. So we took it.

As adults, many of us left the land. Partially because our parents encouraged us to do so. They didn’t want us to share their lives of scarcity and dreams deferred. They wanted us to leave our mark on the world. So we left—to our later regret—and populated places like Chicago, Kansas City, Detroit, and Los Angeles. Our first discovery was that poverty in the city meant starvation. That had never been true down home. We’d been poor, but we were never hungry. The land kept us fed. But in urban spaces, the land had been muted and therefore could not yield. Many nights we wept for the legacy of survival we left behind.

Thank God some of us never left.

Daniel Black is professor of African American Studies at Clark Atlanta University and author of several novels, including Perfect Peace and, most recently, Twelve Gates to the City.