Home Uncategorized Athletic Shapewear: Is the Cinch Worth the Pinch? 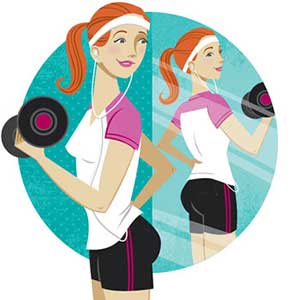 Here’s the, um, rub. You have to exercise to get beach-ready, but you don’t want to pull on snug workout clothes that reveal the jiggle that’s bringing you to the gym in the first place. CityFity feels your pain. The Atlanta-based company incorporates a compression liner in its athletic wear to see you through this shaky stage. Skeptical about the comfort of sweating inside a double layer of spandex, we decided to give it a test.

I ordered the Cutie Booty Capri Pant in steel gray ($81). Theoretically, the inner liner does all the hard work, allowing the top layer to drape naturally (as opposed to the sausage-casing look of single-layer spandex). After I crammed my ample underpinnings inside their clutches, the pants looked sleek and slimming. I gave my rear a nice wallop and hit steel.
But how long could this constriction remain comfortable? From the get-go, I noticed a slight dig into the back of my knee, but I could chalk that up to an overly optimistic size selection or, perhaps, an unfortunate lack of elegant calf-knee definition.

I took them for a spin around the BeltLine. I confidently speed-walked, I jogged. My rear remained as perky as my spirits. But the temperature was a mild 70 degrees, and I wondered how the Cutie Bootys would fare in warmer weather. Would the nylon-and-spandex mesh liner wick moisture and “breathe” as promised? So I took the CBs to the ultimate challenge: a hot yoga class.

Surprisingly, the Cutie Bootys held their own. I was losing buckets of water at a rapid speed, but I can’t say my lower half was any hotter than my upper. And the pants didn’t display any of said moisture, a major plus for a product that aims to enhance your appearance. The garments won’t win any competitions for comfy, but that’s hardly the point. I’d liken the experience to the somewhat awkward but definitely useful embrace of a sports bra. For your butt.