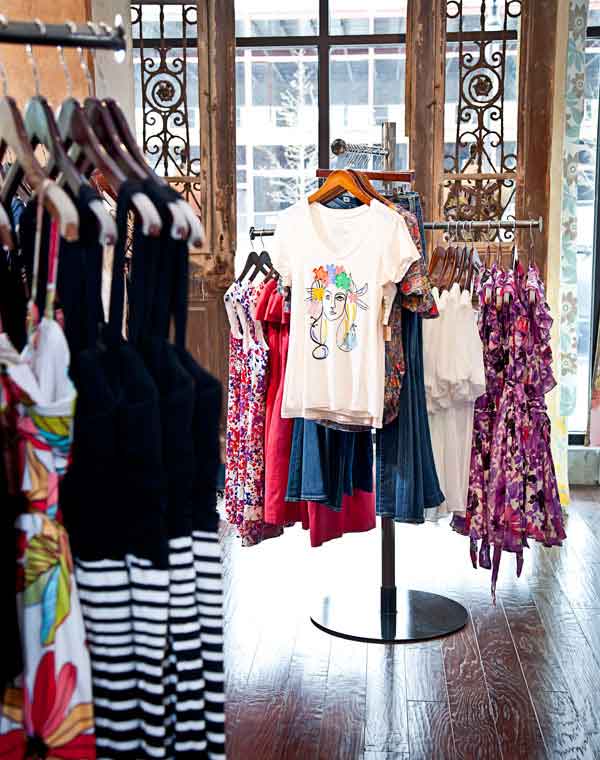 Known for its exuberant Bianca Coletti and Énui dresses, Decatur’s decade-old darling moved into Brookhaven in March. Boogaloos’ second location reflects Brookhaven as much as the original mirrors Decatur. The primary spot’s split-pea-green walls echo the area’s environmental leanings, while the near-white sky-blue paint in the Brookhaven location typifies the burgeoning community’s contemporary nature. The archetype’s low ceilings, awning-ensconced storefront, and wood-framed doorway befit its setting in the town where Mayberry meets Berkeley. The exposed ceilings and expansive steel-and-glass exterior wall in the new destination’s pristine Town Brookhaven development, on the other hand, suit the nascent burg. However, whether in Decatur’s well-worn shop or Brookhaven’s immaculate incarnation, the brand’s playful demeanor remains intact. Boogaloos is just, well, boogaloos.
Owner Penny Scheetz first ran across the word in a South African phone book database in the early aughts, back when she was transitioning away from an accounting profession. The word was too much fun to pass up. “When I say it, it makes me smile,” the thirty-seven-year-old says. So she appropriated it for her new career venture, a shop with an impish mentality (and a worldly name that would only add wood to the fire for those who refer to her boutique as a small-scale Anthropologie). Eva Franco vintage-print dresses, jewelry by such local designers as Isobel Moutrey, and new additions like Plastic Island jumpers and Weston Wear shirts exemplify that frolicsome outlook. Scheetz always had a giddy style philosophy herself, with pieces from myriad lines. “I’m gonna buy whatever I want,” she used to tell her friends as an adolescent. “Ironically, I got ‘best dressed’ in high school,” she says. Perhaps not so ironically. 705 Town Boulevard, Suite S-530, 404-343-0040, boogaloosboutique.com
This article originally appeared in our June 2011 issue.
Advertisement