Thirty-six-year-old Siriano might seem a bit fresh for a career retrospective (no, he’s not retiring, quipped supermodel Coco Rocha, in attendance wearing a raven-like sculptural column dress), but it’s the diversity of his oeuvre that makes his clothes uber relevant and important right now. Siriano, a rare success story spun from the Bravo reality show Project Runway (he now serves as a mentor on the show), has become known as the go-to designer label for dressing people (particularly famous ones) who don’t fit the runway sample size or have been overlooked in the stodgy world of high fashion—people of all ages, genders, colors, shapes, and sizes.

The exhibition, People are People, reads like a modern history of pop culture moments. There’s Michelle Obama’s cobalt blue cap-sleeve dress for the 2016 Democratic National Convention (Jill Biden wore Siriano at the 2020 DNC). The glittering showpiece the rapper Lizzo wore to accept a 2020 Grammy. Jane Fonda’s mint tuxedo gown in the April 2022 issue of Elle. The tulle rainbow dress actor and LGBTQ+ activist Billy Porter wore to the WorldPride celebration in 2019. Curator Rafael Gomes scoured the world for all sizes of mannequin to reflect the real bodies the garments adorned; the alabaster faces were covered in matching tulle.

Porter, who arrived at the opening in a black and gold striped suit with a plunging neckline, recounted a story over a toast about struggling to find a look for the 2019 Oscars. Then, while sitting at a Christian Siriano runway show, he had a vision of the look he wanted: a velvet tux on top and hooped ball skirt on the bottom. “I’m sitting at fashion week at the Christian Siriano show, and coming down the runway are all types, all shapes, all sizes, all creeds,” says Porter. “He’s always done this; it’s in his DNA. I’d already begun to try to play with the binary and my silhouette. I was getting a lot of pushback from major fashion houses telling me what I should be doing. [I was thinking] I need something for the Oscars, I need something high-end, I need a name, and here I am sitting at the fashion show and I’m like, oh my god. If the shot is close, and it looks like a tuxedo and when it pulls back it’s an antebellum gown, everybody will gag. The whole world will gag. And I’m sitting at that fashion show and I realize—he’s the only person who will do it. He’s the only person who will say yes to me.”

Porter’s story isn’t unique, and Siriano has stepped in to dress people—pregnant, plus-size, nonbinary, and otherwise—for major events when other labels wouldn’t. “I think it’s so silly,” he says. “Nobody should have a hard time finding a dress.” We sat down with Siriano for more about his boundary-breaking fashion.

If there’s one look you wouldn’t want anyone to miss because you feel it’s crucial to the story of this exhibition, what would it be?
It’s hard. I guess I would say the pieces that are a little bit genderless, like the things worn by Billy Porter or this Michael Urie look [a half dress, half suit for the 2019 Met Gala], and to make sure they notice the size bodies in the room. We have size 0 to 26 in this room, which is pretty cool.

Did you have a hand in the mannequins and their styling?
For sure. Everything in this room has been worn by someone, probably someone that people know and recognize. So we wanted to make sure that it was their body as best as we could. We needed to make sure that [plus-size supermodel] Ashley Graham in her runway look was different from Ashley Graham in her look when she was pregnant. Oprah is Oprah in Oprah’s body. I think it’s very important to see, especially the young generation to see—I think it will inspire them.

You’ve been called the designer for people who other designers have rejected. Do you have any specific stories about that?
That’s why [actor and comedian] Leslie Jones’s dress is right in the front! I think Leslie’s probably the best example of that. Leslie had a hard time finding a gown for her big Ghostbusters premiere moment, it was her first huge movie. We kind of stepped into dress her. I think it’s so silly—nobody should have a hard time finding a dress—that’s like the dumbest thing. Clothes should be fun—we’re not curing cancer here, we are dressing bodies. That should be very easy and accessible, and I’ve always felt that way, and I hope it becomes more of a thing.

On that note, clothes are fun—you’re not curing cancer—
My worst quote ever. But I hate that sometimes people take it so seriously, and at the end of the day, this is just another form of art—it’s like hanging a painting on a wall, this is hanging a beautiful piece in your closet—there are no rules.

But also fashion can be an agent for change. Is that something you consciously work toward?
I think I do now. I do want to make sure that we create pieces that are nonbinary, that we show that you can be in a fabulous piece of art in any size, any age, any gender.

The message of inclusivity—does that resonate personally with you?
I mean, not necessarily. Obviously being a young gay boy growing up wasn’t always the easiest. So that, for sure.

I’m just wondering how you got to be “the guy” for all the different body types.
I think I just started doing it. I do it, and I don’t care. I’m not reaching out for it necessarily. We just do. If I’m a fan of you, and I love you, like Leslie Jones—I was a huge fan of Leslie Jones—why would I say no to dressing her?

Is there anyone you haven’t designed for that you would love to?
You know what’s so funny, I really have gotten to work with almost everybody that was on my bucket list—but there’s always new people. There’s always a new actress, a new musician coming up. No one even knew who Lizzo was a few years ago. I love her, and I’ve been working with her for years. Gaga was the same. I was one of the first people to ever dress Gaga on television. No one even knew who she was. And I love that.

So do you have your finger on the pulse of who that next person is?
Sometimes. Every now and then I feel like I catch a person really early in their career. Billy Porter was a great example of that. When I first started dressing Billy, especially for the Oscars moment, I think that changed the game. I got to dress Regina King, that was her first Oscar ever, isn’t that crazy? Hannah Wattingham from Ted Lasso, her first Emmy ever. And she won in that dress, so cool. Those are my favorite moments—I get to be part of their history too.

Is there anything about this exhibition that is not in the museum literature that you want to tell people about?
I think what’s cool is that every single piece except for two is the actual piece that was worn by each person. That’s very rare that you get back every single piece. It was hard. Gaga keeps her own archives, a lot of people do. Oprah keeps her own things. The First Ladies, those are the only two that are not the original pieces because they buy their clothes, they’re theirs. And they’re all still pretty intact. These clothes have been worn all night, on stage, I don’t know how they’re alive. Lizzo performed in that, Gaga performed in that, it’s wild to think.

On view through October 9, scadfash.org. 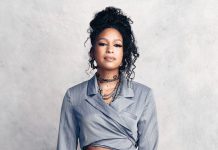