For over three decades, costume designer Ruth E. Carter has combined strong color schemes with fine fabrics to capture the nuances of black culture for classic films and television programs.

The couturier’s attention to detail, thorough research, respect for various eras, and upbeat interpersonal savvy have made her a highly sought-after designer, with credits including Mo Better Blues, The Five Heartbeats, BAPS, Sparkle, Baby Boy, What’s Love Got to Do With It, Love and Basketball, Being Mary Jane, Amistad, Selma, Roots and Seinfeld.

Carter made history as the first African American woman to earn the Academy Award in Costume Design for the spirited Afrofuturist-flavored dress for Marvel’s Atlanta-filmed blockbuster Black Panther, also earning the Marvel Cinematic Universe one of its only three Oscars (all of which were awarded to Black Panther in 2019). Passionate about her craft, Carter has turned her “love letters to black culture and history” into Ruthless, an 11-piece collection hued with liberation colors—red, black, and green—in partnership with Swedish clothing store H&M.

Ruthless, a mononym Carter adopted from crew members on the set of Spike Lee films, is an ode to ’90s fashion themed around authenticity, independence, strength, cultural appreciation, unity, and trusting one’s voice. Debuting in stores on February 13, Carter and H&M curated a New York City block party-inspired launch activation at Georgia Railroad Freight Depot on February 21 that featured props, personal memorabilia, and costumes she designed for Black Panther, I’m Gonna Git You Sucka, Dolemite Is My Name, Do The Right Thing, and Malcolm X.

Atlanta sat for a chat with Carter, who immediately enthusiastically referred to Atlanta as “the Republic of Wakanda,” about the importance of Historically Black Colleges and Universities, her orientation into costume design, her decision to partner with H&M, and plans for the future. This interview has been edited for length and clarity.

What are your earliest memories coming to Atlanta?
It was School Daze. Spike [Lee] was a Morehouse Man. Robi Reed [the casting director] and I both went to Hampton University [in Virginia]. When we all came together as filmmakers and Spike decided School Daze was going to be his first studio picture, he brought us all into it. It was a shorthand. We knew what the story was: the frats, the wannabes, the jigaboos, the Gammites. All of that. We started prepping it in New York though. I did a lot of things you see in the [H&M] line: t-shirt and sweatshirt designs. But back then, we were trying to uplift the race. That was actually both my first experience in film and actually creating a product. Spike and [his production company] 40 Acres & a Mule was the beginning, and it still resonates. We did Do the Right Thing after that. Everything still resonates. It’s a blessing.

How did attending a Historically Black College and University [HBCU] lay the foundation for your success?
Hampton was a family legacy; I had uncles, cousins and my aunt all attend there. My entire family would ask me, ‘You’re going to Hampton, right?’ [laughs]. My uncle, Rufus Easter, who recently passed, was the director of auxiliary services there for many, many years. He retired there. Once I got into Kelsey Hall, my freshman dorm, I had a real sense of home and family. I was an education major, and I come from a legacy of teachers. That experience was enriching. Once I became a theatre major and decided costume design was what I wanted to pursue, the foundation was there. Hampton didn’t have the classes, but they did have a costume shop that was empty. And I took it on and took it over. I did all of the costumes for the plays and the music department whenever they did musicals. I created my own curriculum in a lot of ways. Hampton gave me such a wonderful start. I had the most amazing mentorship. My instructors were cheering me on to pursue it because I was the only one who was doing costumes.

How has it been designing costumes for Eddie Murphy’s much lauded hosting gig on Saturday Night Live, along with his roles in Dolemite is My Name and the upcoming Coming to America 2?
I’ve been a longtime collaborator with Eddie. He’s part of my heart. He trusts me. We can work together, and I actually know what he likes and what he doesn’t like. When I came back to working with him after 10 years and we were setting up Dolemite [a biopic released on Netflix about blaxploitation filmmaker Rudy Ray Moore], this was a passion project for him. I felt excited to be back with Eddie, and then I was excited to actually do a great job in making it as real to Rudy Ray Moore because Eddie admired him. So I wanted Eddie to feel like he was in Moore’s closet, putting on them clothes. I had to make him a pair of platforms out of a pair of tennis shoes so he would be a little bit more comfortable and actually do the work. 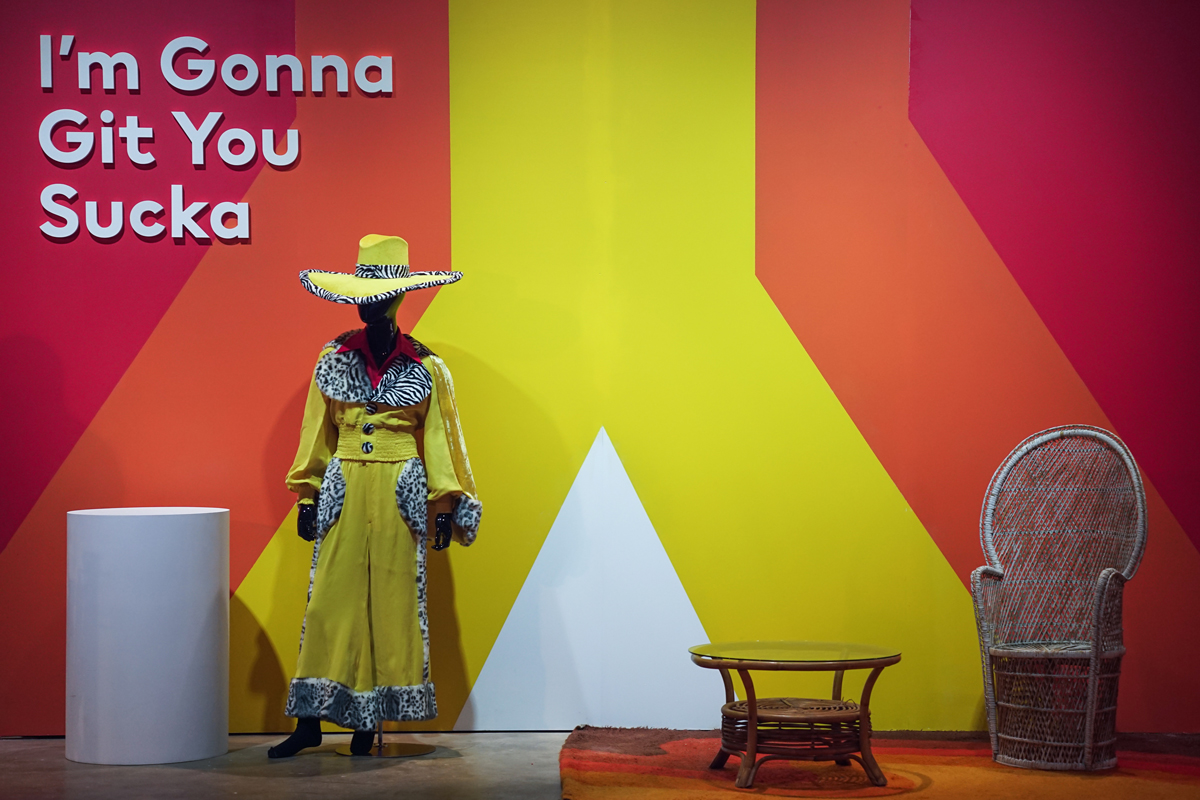 How have you influenced the roster of predominantly black filmmakers you’ve collaborated with?
They didn’t ever claim to be costume designers. They knew that they wanted to tell a story that was inclusive of different types of specialty costumes like Flyguy and those goldfish platforms [from I’m Gonna Git You Sucka], but also normal, everyday people that we know in our communities. I was the expert that came in and said I could do the costuming. They felt there was a meeting of the minds, and we connected. I helped them tell our stories about our people.

Do you feel a sense of responsibility now that you’ve made history as the first black woman to win the Academy Award for Costume Design and one of the first Oscars for the Marvel Cinematic Universe?
Thank you for saying that; that’s always missed. Sometimes, I feel we miss that one because maybe Marvel is a little bit ashamed. I think they’re proud honestly, but being the first is actually a sad commentary that we’re still experiencing. We need to be on the tenth costume designer winning for a Marvel film, but it just doesn’t work like that. Life is short, time passes, people have lives and things in front of them where they can’t pursue their dreams completely. But I hope that I’m an inspiration to those who have started with single parent households, one of eight children saying you can follow that dream, trust your voice, have that passion, and go all the way to the Oscars stage. That’s what I represent; I need another t-shirt saying ‘You can do it’ because I believed in myself. You have to have a real passion for what you’re doing: not the end result, the gratitude, or the awards.

You’re now partnering with H&M. Were you concerned about the controversy and social media backlash involving a 2018 ad that featured a young black boy wearing a sweatshirt that read “coolest monkey in the jungle”?
We can get on a soapbox and keep criticizing a thing. Sometimes, it’s our responsibility to also turn it around. I looked at this as H&M needed to turn it around. That means if I do something really positive, I’ll be blown out there and become attainable to so many people. H&M’s voice is very widespread. How many opportunities do costume designers get to do something like this? People make mistakes, and we have to actually go through this life with empathy. If we want inclusion and equity, we got to make people not feel so fearful that we are going to nail them to the cross. Maybe it’s our responsibility to teach, guide and redirect, so this is a redirection. 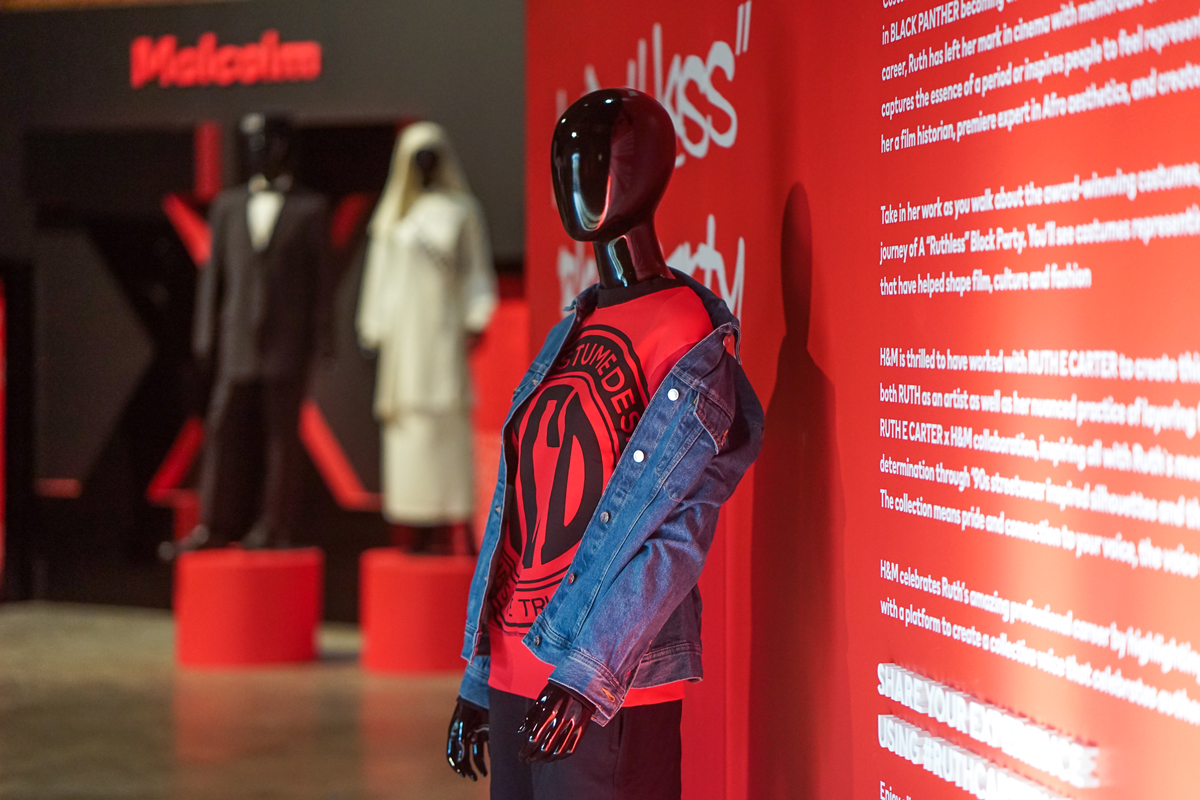 Tell us about the scholarship as part of your collaboration with H&M.
H&M always gives a scholarship when they have a collaboration, so they asked me which university, and of course I said Hampton. It was [Hampton University president] Dr. [William] Harvey that said to not just make it a scholarship, but make it an endowment. An endowment is going to be here after I’m gone. It’s a generous one; a $25,000 scholarship to the Ruth E. Carter Endowment at Hampton. Who could’ve dreamed that I would be able to do this for my beloved home by the sea and be able to offer back? I’m walking in my gratitude right now. What can I tell you?

What’s coming up for you?
I just finished Coming to America 2 last November. I have a book, The Art of Ruth E. Carter, that I just started, so I think when Black Panther 2 is released, I’ll release the book with a lot of Marvel illustrations, my early stuff, and my stuff from Hampton. I hope I can make a really fun book for people to gift to their kids and inspire them further.