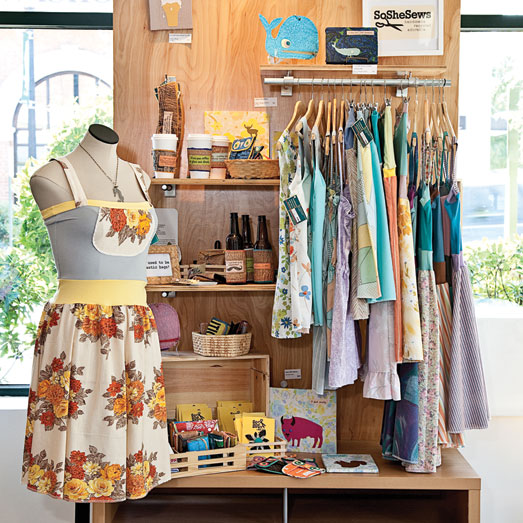 Beehive Co-op, an innovative shop that won fans with its handmade apparel and accessories, shut its Brookwood doors in March. However, its high-end yet affordable DIY concept has been revived and updated as the Beehive, now in the Edgewood Retail District, just shy of Little Five.

The new Beehive has not one queen bee, but four. Malene Davis, Brandi Barnes Shelton, Preeti Ayyangar, and Kanani Whack all worked with the Co-op, and when founder Petra Geiger wanted to sell the spot, the women joined forces, bought it, tweaked it, and relocated the hive to a place with foot traffic more in line with their philosophy of green living and localism. Each of the new owners has a specialty. Shelton has a line of loose-leaf tea. Ayyangar designs organic baby blankets. Whack bakes a Magnolia-caliber buttercream cupcake line. Then there’s Davis, queen of the queens. The Co-op’s final manager, she launched a line of chunky necklaces made of recycled materials in 2007; her brand is now sold at more than fifty outlets nationwide.

The queens are but four of the shop’s sixty-two designers, who contribute clothing, jewelry, bath and body wares, baby products, fine art, and edibles (part of a new section of the store called Handbaked). Hazel Studstill, for instance, uses discarded Plexiglas and stingray leather to accent her jewelry line. Keisha Fullerton makes trendy, lightweight, colorful dresses out of old fabric—perfect for summer. A bath and body brand, Mama, produces natural scented soaps from olive oil that are so fresh they need expiration dates. Some of these worker bees labor in the store, taking care of the separate cells matrixed across the boutique’s open, square space—a pleasant alternative to the Peachtree predecessor’s bowling-alley-sized layout. And because most of the designers produce locally, they can easily alter an item or create a new one based on a customer’s specifications.

“It nurtures creativity in a customer that didn’t think she was creative to begin with,” Davis explains. To the owners, harvesting this creative customer is key. For underlying all the jargon of “upcycling” rests a simple dream of making every bee that flies through the boutique not just a shopper bee but a worker bee as well. Combining DIY classes—from sewing to soap-making—and an engaging shopping “experience,” it’s a honey of an idea. 1250 Caroline Street, Suite C-120, 404-350-3898, thebeehiveatl.com