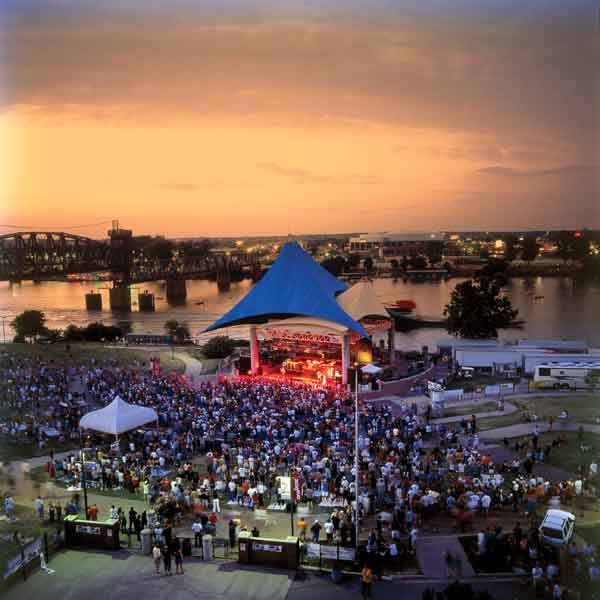 Little Rock sits at the crossroads of North, South, East, and West. In the bars, the blues riffs of Chicago meet the country twang of Tennessee. The Southeastern scent of slow-roasted pork fills the air one minute; the smell of seared Texas beef wafts in the next. Unlike other cities with distinctive identities, the Arkansas capital blends the traditions and cultures of its neighbors into a concoction that’s decidedly all-American.
The main drag, Markham Avenue, leads to the William J. Clinton Presidential Center. The mammoth, metal-clad center resembles a large-scale mobile home but makes the Carter Center look like an appliance box. Inside, the museum meticulously documents Clinton’s years as president with exhibits like a re-created Cabinet Room and a sample White House table setting. A Secret Service limousine sits on the ground floor, where visitors crane their necks to glimpse the James Bond gadgetry inside. This summer the center features two Elvis Presley exhibits. Elvis at 21 shows candid photos of a young, unguarded Presley. With help from Graceland, ELVIS displays memorabilia such as the red two-seater MG Elvis drove in Blue Hawaii.
Little Rock’s culinary scene centers on small chains such as Boscos Restaurant & Brewing Company. There’s also a strange obsession with “flying” food: The Flying Saucer, Flying Fish, and Flying Burrito all sit near the Clinton Center (perhaps a ripe location for a Flying Biscuit?). A local landmark, Doe’s Eat Place earned a national reputation as a political hangout in the early 1990s when Clinton campaign staffers overran the place. The eatery is famous for Flintstones-sized steaks in two- to six-pound portions ($16.50 per pound for the T-bone).
In the River Market District downtown, Ottenheimer Market Hall has more than a dozen vendors with offerings from hot dogs to Middle Eastern dishes. The Riverfest Amphitheater hugs the riverbank out back and features concerts and festivals throughout the summer, including Pops on the River, the state’s largest Fourth of July celebration.
Underrated and overlooked, Little Rock’s music scene is a melting pot of American music, and the historic White Water Tavern is the spoon that stirs it. Current owners have preserved the treasured dive-bar ambience, complete with cheap paneling, vinyl chairs, beer signs, and plenty of PBR. Claim a spot at one of the long communal tables packed with flannel-clad hipsters, aging bikers, and well-dressed professionals, and savor the live blues, folk music, and roots rock.
Like Atlanta, Little Rock has its own civil rights history. In 1957 the U.S. Army’s 101st Airborne division escorted nine black students through the doors of Little Rock Central High School after Governor Orval Faubus dispatched the Arkansas National Guard to prevent the school’s desegregation. Today the National Parks Service operates a visitors center with a permanent exhibit preserving the legacy of the “Little Rock Nine.” (Visitors can’t go inside the school, which still functions.)
Two unique hotels stand out downtown. The Capital Hotel opened in 1870. Behind its cast-iron facade, ninety-four guest rooms—with fourteen-foot ceilings, fresh flowers, and designer linens—offer arguably the most luxurious lodging in Little Rock. Across the street, tourists crowd the Peabody’s atrium at 11 a.m. and 5 p.m. to watch the famous ducks march along the red carpet to and from the hotel fountain. From the upper floors, guests enjoy a spectacular view of the Arkansas River winding its way from the Ozarks to the Mississippi.
Photograph courtesy of the Little Rock CVB
Advertisement 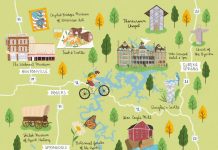