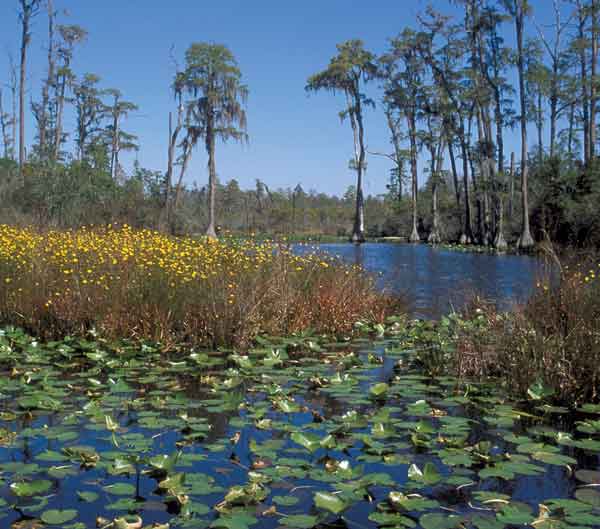 I lean back in the lawn chair to soak up the early autumn sun still high in the sky and aimlessly swat at bugs, waiting for the next band to start. To my left, a local I’d been chatting with earlier offers me a Bud Light from his cooler. I reach over to accept it gratefully as the drummer onstage clicks his sticks together—one, two, three, four—and music cuts the muggy air again.
I went to Gram Parsons’s hometown of Waycross, Georgia, for the same reason Elvis Presley fans visit Tupelo, Mississippi. The town is most famous as a doorway to one of the world’s largest blackwater swamps, the Okefenokee. But every September, thousands of fans and dozens of bands gather for the Gram Parsons Guitar Pull, which pays homage to the Byrds legend and Flying Burrito Brothers cofounder, who died under the influence of drugs and alcohol at age twenty-six in 1973. Parsons created a revolutionary blend of country and rock, heavily influencing musicians such as Emmylou Harris, Keith Richards, and R.E.M.’s Peter Buck. Each year acts such as Levi Lowrey, a Dacula native on Zac Brown’s label, offer up heavy doses of folk, while bands like the Woodgrains from Athens bring soul and upbeat classic-rock grooves to the lineup.
Heading south from Alma along U.S. 1, I found blueberry farms giving way to old brick buildings and railroad tracks as I entered historic downtown Waycross. Spanish architectural influences hinted at its proximity to the Florida border, about forty miles away. Following the walking tour that begins at the Historic Railroad Depot, I stumbled upon the quaint Pond View Inn, a pleasant option for visitors squeamish about rustic accommodations in the parks near the swamp.
As I drove through town, the letters “BBQ” popped out like diamonds among the chain restaurant marquees. Hog-n-Bones and DK’s Bar-B-Q are local favorites, but nearer the festival, the newer Sloan’s BBQ Barn—a red building with a classic gambrel roof—beckoned me. I ordered a pulled pork sandwich at the window, and the cook rattled off sauce options: ketchup-based, mustard-based, or the rarest of barbecue condiments, mayonnaise-based. Sitting down at a picnic table out front, I settled on the tangy, aromatic yellow one and doused the perfectly smoked meat.
The road leading into Laura S. Walker State Park is braced by magnificent pine trees growing in perfect rows. The office attendant gave me a key to a one-room swamper cabin with a front porch, tin roof, and wood siding the color of the Spanish moss dangling from nearby cypress trees along the lake. The Georgia state park includes the Lakes, arguably one of the best public golf courses in the state. This is alligator country, so it’s imperative to keep your ball in the short grass or risk ending your golfing career like Chubbs Peterson.
Nearby is Okefenokee Swamp Park, a private, nonprofit park where boat tours glide visitors across the swamp’s mysterious waters. Warblers, alligators, and deer are common, but the constant sounds of water blooping, leaves rustling, and twigs snapping imply more creatures lurking in the shadows.
As evening approached, I drove back to the fairgrounds for the festival. Parsons’s voice moaned through the car speakers as he sang about a “land that was nearly forgotten.” Maybe he was thinking about Waycross.
Photograph courtesy of GDECD
Advertisement