My apologies to our dining critic, Bill Addison, whose office is next to mine, but my longtime family recipe for chicken ratatouille involves opening lots of cans. That is, it did until recently, when I “earned” my Locavore Girl Scout badge. I couldn’t resist testing the new badges when I heard that the Girl Scouts had overhauled their entire program for the first time since 1987. Gone are awards like Food, Fibers & Farming, and Looking Your Best, which included hosting a color party to determine your most flattering palette. New are activities like Cross-Training, Screenwriter, and Geocacher. Thanks to the Locavore requirement that I cook a favorite dish with locally grown foods, I’m now addicted to the Marietta Square Farmers Market. Who knew parsley had flavor? If I were still in middle school, I’d take a stab at the Science of Happiness.

Of course, my ratatouille recipe dates back to the 1970s, approximately the last time I wore a Girl Scout uniform. A lot has changed since then, starting with the uniform: There isn’t one. Girls just wear their own white shirts and khaki bottoms (skirt, pants, or shorts), topped off with a sash or vest for insignia. The makeover started several years ago and is going full throttle as the Scouts head into their centennial celebration of 2012. As any Brownie worth her Trefoils knows, the organization was founded by Juliette Gordon Low in Savannah. So the anniversary strikes close to home for the 60,000 members of the Greater Atlanta council.

“Girl Scouts [has] often been thought of as nice but not necessary,” says Atlanta’s CEO Marilyn Midyette. “We want to be necessary. Historically we’ve been associated with cookies and camping. Of course, camping was really about self-reliance. And selling cookies was about financial and business literacy. Girl Scouts has always been about leadership, but the kind of leadership has changed because society has changed. Seventy-two percent of women work outside the home now. When you look at the nations that have the most productive societies, they have full participation from the entire population.”

Ironically, last year a University of Maryland study concluded the old Scouting handbook was rife with gender stereotyping, from the content of badges (childcare, makeup, etc.) to cutesy titles like Frosty Fun or Rocks Rock. There were relatively few group science and math activities. Well, that is so 2001. Just ask the 1,100 participants who came to the Girl Scouts Science, Technology, Engineering, and Math Expo at the Georgia World Congress Center in October. Or the dozens who attend Camp CEO in Mableton. Or perhaps the girls studying Aboriginal culture in Australia this summer.

The “new” Girl Scouts runs like a Fortune 500 corporation (and with $700 million in cookie sales, it is the nation’s largest female-directed enterprise). It has the jargon to prove it. There are five key strategic programmatic platforms, fifteen outcomes, three keys to leadership, dozens of common core standards, etc., etc.—all powered by an NYC-based research institute dedicated to studying how girls learn. The Atlanta council’s latest motto? “Invest in a girl and change the world.” Watch out. The Girl Scouts are tired of being nice. 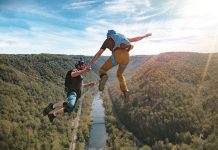