Our nightlife hit an ecstatic peak in the 1990s, a decade lubricated by the free-flowing cash of the dot-com boom, the flash of the burgeoning hip-hop scene, and the youthful exuberance of the Olympics. Of those years, none, arguably, was better than 1996, when you could conceivably hit all of these places in one glorious night. Rupert’s
Filling the shoes of the Limelight—the disco of “Disco Kroger” fame—was a tall order, but Rupert’s kept Buckhead dancing thanks to its 12-piece house band, the self-proclaimed “fabulous” Rupert’s Orchestra, which pumped out vanilla covers of Top 40 hits.
Fate  The club closed by the late 1990s, but you can still book the band for your next soiree. Backstreet
One of the largest gay bars in the Southeast, this two-story Midtown club was among the few Atlanta nightspots with a 24/7 liquor license. Home to Charlie Brown’s Cabaret and a disco floor that drew gay and straight revelers, Backstreet was the go-to place to party after other clubs closed.
Fate  It stopped rainin’ men in 2004 after a city ordinance mandated 3 a.m. closings. Buckhead Village Scene
By day the moneyed heart of Atlanta, by night its stoked loins. After an altercation involving a posse belonging to the NFL’s Ray Lewis left two stiffs on the sidewalk in 2000, the powers that be tightened the screws and brought the party to a close.
Fate Then, clubs with names like Uranus. Now, Buckhead Atlanta boutiques. MJQ
Entered through an unmarked side door of a seedy hotel, the original MJQ was an underground Euro lounge dropped in the middle of Ponce. The thrift store furniture and cans of beer served out of coolers provided the perfect setting for the mix of acid jazz and trip-hop.
Fate  In 1997 it relocated down the street to another basement lair. Still doesn’t have a sign. Club Kaya
Before it was replaced by the flashier Vision in the early aughts, Kaya was a scruffy, DJ-driven dance club and launch pad for the city’s emerging hip-hop artists. A notably mixed-race clientele often queued around the building to see shows featuring Jay Z, Ludacris, Kurtis Blow, and other rap luminaries.
Fate  Razed in 2006 for the 1010 Midtown condo tower. The Gold Club
This edifice to the ecdysiast’s art was a haven for excess throughout the decade: an epilepsy-inducing blur of neon, mirrors, and throbbing music; wall-to-wall hotties serving up in-your-face table dances; and stratospheric bar tabs. A stop here became de rigueur for NBA stars with names like Ewing, Rodman, and Mutombo. Then came federal indictments alleging the strip club was little more than a gilded brothel, with profits funneled to the Mafia.
Fate  The building on Piedmont Road is now the Gold Room, just a plain old nightclub.

From our archives: Read “Are We Having Fun Yet?” by by Melissa Harris, a dispatch from the frontlines of the Buckhead party scene. 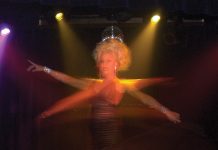 Reminisce your days partying at Backstreet with this ultimate playlist