No Atlanta act bookended the decade better than TLC. Tionne “T-Boz” Watkins, Lisa “Left Eye” Lopes, and Rozonda “Chilli” Thomas burst onto the scene with their DayGlo fashions and a 1992 debut, “Ooooooohhh. . . On the TLC Tip.” From then until 1999’s “FanMail” (hit single: “No Scrubs”), the tumultuous trio dominated both the charts and the tabloids. For a time, they surpassed even the Supremes to become the all-time biggest-selling female pop group. TLC’s rise came to a halt in 2002 after Lopes died in a car crash. In 2013 the two surviving members executive-produced the VH1 docudrama “CrazySexyCool: The TLC Story.” Watkins and Thomas began performing again as TLC and this year will go on tour with NKOTB.

Says Thomas of TLC’s endurance: “It’s so crazy to me when a 10-year-old comes up and knows who I am, thanks to the VH1 movie. It’s grabbed a whole other generation. It makes me feel good to know that we did the right thing when we first came out with our direction and how we felt about female empowerment.” 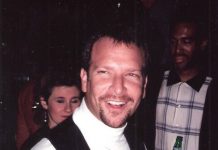 Back in the day: Michael Krohngold

Reboot: The Brasserie and Neighborhood Cafe at Parish