Home Uncategorized Where are they now? Matt Moseley

On April 12, 1999, as flames and smoke consumed a five-story building under renovation in the Fulton Bag and Cotton Mills complex, the Atlanta Fire Rescue Department’s Matt Moseley dangled from a helicopter at the end of a 50-foot rope. Swinging above the inferno, Moseley used hand signals to guide the pilot toward a 220-foot-high crane, its gondola ablaze. Crane operator Ivers Sims had escaped the scalding metal walkway by climbing onto the concrete counterweights, where Moseley grabbed hold of him and then carried him as the chopper transported them to safety.

Sims was virtually unharmed, requiring treatment only for smoke inhalation and heat exposure. Moseley, the heralded savior, seemed to suffer from a mild case of embarrassment. “We don’t like to be called heroes,” he told CNN. “We had a job to do, and we went out there and did it.”

Moseley returned to the job for nine years, until budget cuts in the AFRD compelled him to seek a lieutenant’s position in Johns Creek. “I’m getting older and roller coasters make me nauseous,” he said then. “I want to be in a place more like a carousel.”

Two years ago, he left the carousel for the Canton real estate market. Now instead of helping you out of a collapsing building, Moseley wants to help you into a sound one. 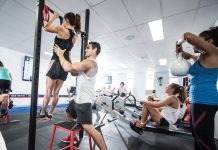