Police barricades were erected at Angier and North Avenue, blocking off a quarter-mile stretch of Boulevard on Saturday for the Year of Boulevard “Block Party,” which along with standbys like hotdogs, inflatable trampolines, balloons, and lemonade featured booths and mobile offices from a couple dozen social services agencies. The event, hosted by Kwanza Hall of city council’s District 2 and Joan Garner of Fulton County’s District 6, drew more than 900 attendees, according to Hall’s office.

Making my way between booths, I ran into Shelbra Trimble, whom I’d last met at the opening of the Zone 6 neighborhood safety center. She was walking with her daughter and two-year-old grandson, Zion. “This is really nice,” she said. “I just hope he doesn’t get confused. I don’t normally let him go out in the street here when he visits,” she said. As Zion made his way toward a giant bunch of balloons, I headed into the mobile job center operated by the Atlanta Workforce Development Agency.

Inside the big white truck, ten laptops were set up. “By the time someone leaves here today, they’ll have an email address, a resume, and be registered for our job fair on Tuesday,” said Ralph Dickerson, senior IT specialist with the City of Atlanta (pictured above), one of about a half-dozen agency staffers on duty. “For this area, jobs are a big need,” he said, and making contact through a mobile unit is a way of introducing people to the services available to them, and initiating the process of applying for jobs electronically.

Across the way, was another mobile unit: a women’s health-screening truck run by the Fulton County Department of Health and Wellness. A clinic inside the truck was providing free breast-cancer screenings, and referrals for appointments at the nearby clinic at Boulevard and North Highland. “It’s really important for us just to build awareness about what’s available,” said Schands Wesley, who was manning the booth. In between the agency booths and food and fun, moving crews from the Furniture Bank of Metro Atlanta delivered a hundred beds and other furniture to Bedford Pines residents. The deliveries were the result of a quality-of-life inspection undertaken a few months back by Edna Moffett of Operation P.E.A.C.E., the local after-school/summer program. She noted that many residents of the Village of Bedford Pines apartments had very little furniture; indeed a few used black trash bags in lieu of dressers while others simply slept on the floor. Dots were connected via electronic message boards and phone calls, with the result that moving vans loaded with donated furniture made their way into the blocked-off streets for Saturday delivery. “We just had a donation from a dorm, so we have lots of bunks, which is great for the needs of families,” said Megan Anderson, executive director of the Furniture Bank.

Anderson, Hall, and Garner helped to carry a bunk and two mattresses into the home of Rosetta Brinson, a new Boulevard resident, who moved into the neighborhood about three weeks ago, with her two children, ages seven and five, happy to have her own place after sharing an apartment with her mother. The bunk bed would be a help in getting started out, she said. She’d learned about the Furniture Bank donations from the leasing office.

Brinson said she was familiar with the area before moving to Boulevard; her mother grew up in the neighborhood back when it was known as Buttermilk Bottom.  “It’s pretty quiet in this section,” she said. She’d heard rumors about the Year of Boulevard initiative, among them fears that the Village of Bedford Pines apartments might be torn down as part of a redevelopment plan. But she’d been assured that wasn’t the case and is looking forward to settling in and having her kids, Christyanna and Deonta, start school at Hope-Hill this fall.

What the neighborhood really needs, she says, is more grocery stores. “There’s nothing that convenient, especially for people who don’t have a car.” But otherwise, “It’s all right, right here.” 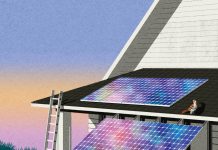 Atlanta leaders want to power the city with 100 percent clean energy by 2035. Can it be done? 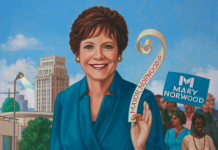 There’s something about Mary Norwood