Home Year of Boulevard From drug market to dog park: the rebirth of Renaissance Park 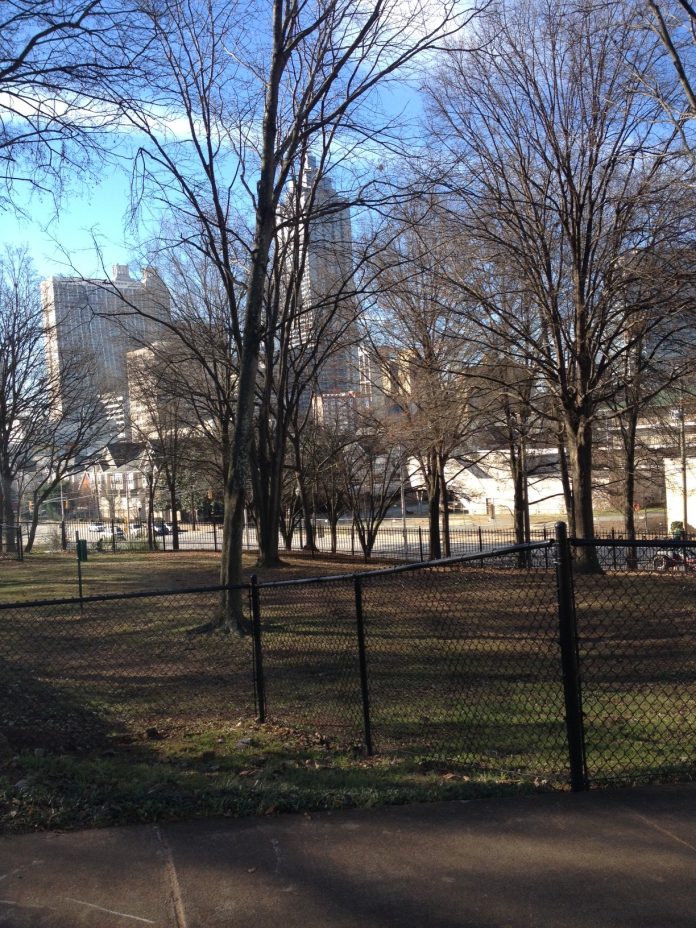 Saturday morning’s monsoon-like conditions didn’t naturally lend themselves to a park dedication ceremony. But the Renaissance Park neighbors who huddled together under the white tent were only too happy to brave the rain, wind, mud, and even Alvin and the Chipmunks squeaking The Chipmunk Song on the PA system in order to reclaim their public park.

The wooded pocket park with a picturesque downtown skyline view has been transformed into District 2’s latest amenity, an off-leash dog park with designated areas for small and large dogs—the first such facility in downtown Atlanta. The dog park is another step in the ongoing Year of Boulevard initiative spearheaded by Atlanta City Councilman Kwanza Hall. Launched in 2012, and continued through 2013, the so-called “YO Boulevard” effort to transform the Boulevard corridor is slated to continue into 2014, according to Hall’s office.

The idea for reinventing Renaissance Park came in September 2012, when neighbor and park advocate Catherine Chase’s grant application to Park Pride yielded an awarded $25,000 startup check. “Most of the residents here live in multi-family homes and this park was underutilized, so it was a perfect opportunity to create something that would bring neighbors and dogs together,” Chase told Atlanta magazine. “I wanted to help see that this park gets the attention it needs. With the help of Atlanta Police Department’s Zone 5 and Zone 6, we’ve seen an incredible change over the last few years, and this dog park is the icing on the cake.”

Director of Parks Doug Voss opted to quote Atlanta parks and recreation commissioner George Dusenbury in his comments to those assembled for the ribbon cutting. “Today we increase the number of dog parks in the city by 50 percent,” Voss announced to cheers and barks. “We only have two dog parks in the city, one in South Bend Park and one in Piedmont, and it’s been several years since they opened. That explains some of the challenges we face. That has not been the case with this creation of this dog park. This project came together faster than most of our projects, thanks to George, Catherine Chase, Kwanza Hall’s office, and of course, Park Pride.”

Park Pride executive director Michael Halicki lauded the community synergy present in the project. “We were able to a community building grant of $25,000,” he explained. “And then the parks department matched it with another $30,000, Councilman Kwanza Hall and District 2 came up with $10,000, and then Renaissance and Central park neighbors came up with an additional $15,000. This is what it looks like when a community works together.”

For longtime residents, reclaiming the wooded chunk of the neighborhood represents a major victory. Indeed, a decade ago, when word spread across Central Atlanta that concert promoter Peter Conlon was moving Music Midtown to the neighborhood surrounding the Boisfeuillet Jones Atlanta Civic Center, some residents made immediate plans to be elsewhere. Those who stayed, however, enjoyed some of the weekend’s unexpected benefits to the neighborhood (Hole lead singer Courtney Love baring her breasts and screaming expletives into a microphone, not withstanding). For starters, Music Midtown weekend became the only weekend of the year when local residents felt safe roaming through Renaissance Park, the small wooded park between Pine Street and Renaissance Parkway. More routinely, empty dime bags from the speedy sales (and consumption) of crack cocaine littered the ground, along with the occasional used syringes. It was not uncommon for residents returning home after work to discover drug dealers, their clients, and/or mentally ill patrons of the nearby Peachtree Pine Street Shelter lined up on the curb handcuffed with plastic zip tie cuffs by APD officers, awaiting an Atlanta Police van.

While the Peachtree Pine shelter’s fate remains uncertain, cranes in the Midtown and Downtown skyline announce fresh construction projects while chef/owner Calvin Phan is enjoying steady crowds at his Asian/American fusion eatery, Poor Calvin’s, across the street on Piedmont Avenue.

Even as Catherine Chase, a Central Park resident, touts all these improvements, don’t expect to see the Keep Atlanta Beautiful board member walking her own pets in the new dog park. “Actually, I own two cats, Barney and Percy,” Chase conceded with a laugh. “And they’re not happy about this at all.”