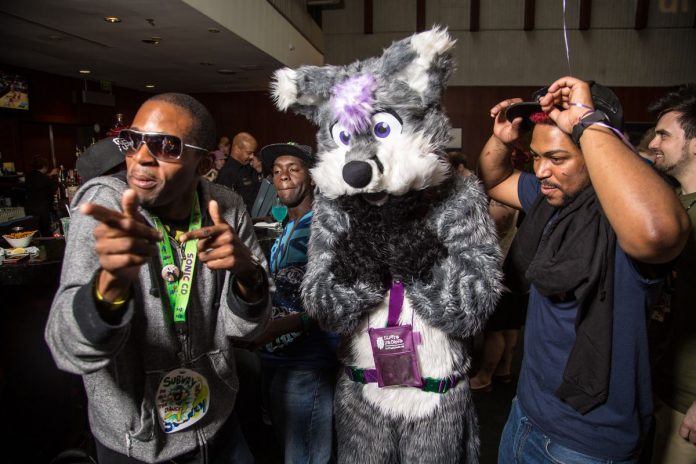 On a weekend that seemed perfectly suited for the park—clear skies, and generous 70-something-degree breezes—some 2,400 people from around the world descended on the Westin Peachtree Plaza to suit up for something completely different: Furry Weekend Atlanta, which celebrates its tenth anniversary this year.

From March 14 – 17, attendees of the annual convention—designed for fans of anthropomorphism, the attribution of human characteristics and behavior to animals—gathered over three main hotel floors for a mix of events, from poker and video game tournaments to a talent show, as well as panels on topics such as fursuit making and Furoticon, an adult trading card game. And, as with any event that attracts such a huge crowd, convention goers were as colorful and diverse as the programming itself: some attendees wore basic accessories, like cat ears, while others remained in full suit for the entire convention. “What outfit?” asked “Razz,” a Chicagoan dressed in a dog suit. “I am a puppy.”

Some attendees, such as “Phorone,” were drawn to particular events: the twenty-two-year-old from Seattle was attending his fourth Furry Weekend Atlanta, which he says has become his favorite of the conventions because of the dance competition; he placed third this year. “The dance contest began in Atlanta, and it still has the best one,” he said. “People aren’t just having fun on the dance floor—many are professional dancers who come with choreographed routines.”

Others, like “Jonus,” a website designer from Pittsburgh, had come for an escape, both mental and physical. “I work sixty hours a week, so it’s fun to meet like-minded people and also get some exercise,” he said of the convention, which he was attending for the first time. “I’ve met so many friends from around the world, from England to Prague, and there’s a tremendous sense of community here.”

>> From the magazine: Read Candice Dyer’s interview with FWA founder “Tiger Paw” from the March issue