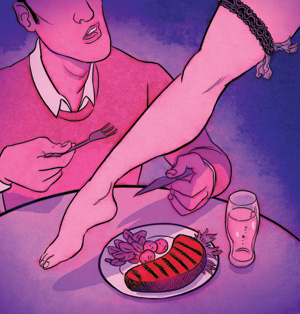 I didn’t drag my editor to the Cheetah. He wanted to go. For the food.
The idea of reviewing Alluvia, the in-house restaurant inside the Midtown gentleman’s club, took hold of me after a conversation with its executive chef, Bill Toro, at a cheese seminar. “They just built me a brand-new kitchen,” Toro had said, casually mentioning that he is gay, which is a big plus if you are going to be around naked ladies all day, and that he had revamped the menu. If he was surprised to hear that I had eaten at Alluvia before his tenure—only once, and with the dining critic for a competing local publication, who wore a horrific trench coat and paid for everything—he didn’t show it.
This time around, like a pro, I took care of the cover charge ($10 per person after 7 p.m.) in a lobby as chaste as that of a suburban multiplex. Then the boss and I stepped into the world of nude entertaining. Looking in vain for a stand to claim our reservation, we aimed past an ominous ATM machine and toward a raised dining area with high-backed red banquettes and four-tops overlooking the main action.
Strange thoughts kept popping into my head while I held up my end of the conversation, waiting for my only slightly less experienced companion to catch his breath. If a woman wears nothing but acrylic platform shoes and an elastic garter with a bunch of dollar bills, is she buck naked? Is that where the expression comes from? The flattering light bathing the elevated runways made me think of upscale grocery stores where the heads of lettuce look impossibly green, the steaks surreally red, and everything feels staged.
“Can we get any peanuts?” we asked after nursing our drinks for a while, waiting for our shrimp tempura and the lamb lollipops we ordered because of the slightly salacious name. There are no free bar nuts at Alluvia, whose uncomfortable name—the plural of alluvium—is inspired by a South African winery. The menu delves into familiar New American territory: crab cakes, seared duck breast, fried chicken with mashed potatoes and haricot vert. We ordered a nicely charred USDA Prime strip steak with creamed spinach, giant chicken piccata on ziti with creamy vodka sauce (the waiter’s recommendation), and the silly, colossal French toast dessert with hard strawberries. The food was priced as it would be in any luxury restaurant, and in this age of expensive cocktails, there was nothing about a $7 Manhattan or a $13 split of Chandon pink champagne with a screw top that felt like robbery.
We saw no one else eating a three-course meal, but fellow diners did receive special visits from ladies, who nonchalantly stepped back into the G-strings previously draped on the railings of the performance area and meted out chatty intimacies and the occasional table dance.
The take-away from the evening: As long as all you do is eat, drink, and look, you’ll get your money’s worth out of your entrance fee in a classy joint where lobster and gnocchi comes with a side of unlimited nudity. Even without the spice of arousal, the food tasted pretty good to me. 887 Spring Street, 404-892-3037, thecheetah.com
Illustration by Koren Shadmi
Advertisement