Tavern 99 patron Bren Allison is $200 richer this morning after submitting the winning “Worst Love Story” essay entry in the Buckhead nightspot’s anti-Valentine’s Day contest this week. Allison’s cautionary tale involves multiple chance encounters with her local pizzeria’s bartender, first at the pool hall across the street from her home and later in the row behind her at the movies.

Was this fate? Cupid’s handiwork? Kismet? Did we mention she won the contest?

Allison says all became clear when she finally agreed to a post-movie libation with said bartender and his obsession with her Crocs-adorned feet inspired him to blurt out, “Can I massage your feet?” Allison’s official response: “I jetted the eff out of there as fast as my sandals would allow.” At 3 a.m. the next morning, Allison awoke to discover the same bartender drunk and at her front door, leaning on the buzzer. It was then that the mental mixologist confessed to stalking her after running her credit card for a take out order weeks earlier. Allison says she told him to scram and double-bolted her door.

The bartender’s final words to Allison should inspire single women across the city to use cash for future to go orders: “Ok, if you won’t let me in so I can suck your toes or [expletive] your feet, you’re a snobby bitch with no heart.” Like any prize-winning storyteller, Allison saved the best for last. She writes, “I swear I could hear him crying as he rode away on his broke-ass 10-speed bike.”

TBS PICKS UP “FOR BETTER OR WORSE”

When we chatted with actress Tasha Smith a few months back as she reprised her “Why Did I Get Married?” role of Angela Williams for Atlanta director Tyler Perry’s new TBS spin-off sitcom, we mentioned Perry’s products for TBS tend to have a lengthy shelf life. “From your lips to God’s ears!” she cracked. Apparently, the almighty and the TBS suits were listening. TBS has just ordered an additional 35 episodes of the Atlanta-produced half-hour comedy. Perry himself wrote and directed the show’s first 10 episodes (the sitcom ended its successful inaugural run in January). On her Facebook page, Smith announced she and the cast will reconvene here next month when shooting commences on season two.

“Obviously, Paul needs to make more money to pay alimony to that crazy ‘Dancing With the Stars’ ex-wife of his.”

—   Dismayed 97.1 FM The River DJ and life-long Beatles fan Kaedy Kiely on her  blog this week titled, “Aw, Paul, Why?” about the release of Paul McCartney’s new album of standards, “Kisses on the Bottom.”

CASTING CALL FOR “THE REVOLUTION”

The new ABC Daytime program “The Revolution” (or as we thoughtfully refer to it, the on-the-cheap lifestyle show that sent Victoria Lord Riley Buchanan Carpenter Davidson Banks a one-way ticket to Eterna) is coming to Atlanta Saturday in a search for makeover candidates. “The Revolution” producers will be at the Georgian Terrace in Midtown from 10 a.m. to 4 p.m. looking for women 18 and older with 50 to 100 pounds to lose “and are ready for a full life transformation.” Applicants should bring a non-returnable photo of themselves to the casting call. We’re told producers will supply those selected with a trainer and a nutrition plan “to help you lose weight within your own environment.” The latest addition to the ABC Daytime line up (seen weekdays at 2 p.m. on WSB-TV) features former Atlanta handyman Ty Pennington as a life coach and Atlanta therapist Tiffanie Davis Henry. For more info, go to http://www.therevolutioncasting.com/ 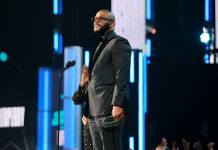 Tyler Perry is Hollywood, and everyone else is taking notes