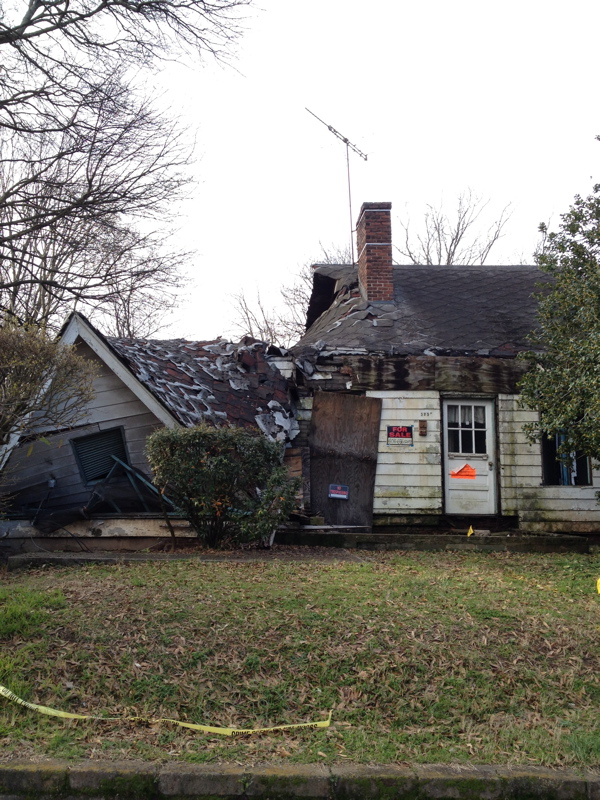 Joshua and his army, as the Bible story goes, walked the perimeter of Jericho for seven days before its fortifications collapsed. Major C.J. Davis of the Atlanta Police Department’s code enforcement unit spent nine months navigating a maze of paperwork, hearings, meetings, and other red tape before the walls of an abandoned bungalow at 375 Angier Avenue came tumbling down.

But the major’s persistence paid off, and on Thursday morning Davis smiled and snapped camera phone photos as a giant backhoe dug into what was left of the house; Mother Nature and neglect started the demolition process months ago and the roof already had sunk in on itself. (That photo is from last week.)

Although it was chilly, neighbors came out to watch; they clapped and cheered as the machine clawed through the walls like a fork digging into a slice of layer cake.

“I am relieved to see this finally happen,” said architect Arthur Clement, who lives across the street. “It’s not just an eyesore, it’s dangerous. There are a lot of kids who play around here.”

“We’re excited to see this finally getting done,” said Dan Weinstein, who lives on Ralph McGill and is vice president of the Fourth Ward West neighborhood association. “We’ve been bombarding Major Davis with requests. She’s been great working with us, but this has been almost a year-long process.”

It’s not easy to do something about an abandoned property. Owners often ignore citations, or dispute them, saying they can’t afford repairs or demolition. The case of 375 Angier eventually was taken to the In Rem Review Board, which holds public hearings on buildings deemed “unfit for human habitation or use.” After several rounds of those hearings, then a series of inspections for everything from rats to asbestos, then permitting requests, the house was finally slated for demolition. Thursday’s work cost Davis’s office $25,000. The saga still isn’t over; a lien will be put on the property, triggering a new round of hearings.

“It’s an arduous process to push this sort of thing through,” said Clement. He and other Angier Avenue residents, along with members of area neighborhood associations, worked with APD code enforcement on the process, with support from Year of Boulevard. “Kwanza and Jay really helped with this,” he said.

Davis said her next project is 501 Boulevard, a boarded-up apartment building whose owner has long been AWOL. That building isn’t just physically dangerous; it’s used by squatters and drug dealers, say neighbors and APD officers who work in the area. Indeed, during the spring 2012 Year of Boulevard community cleanup, people were found to be living in the building.