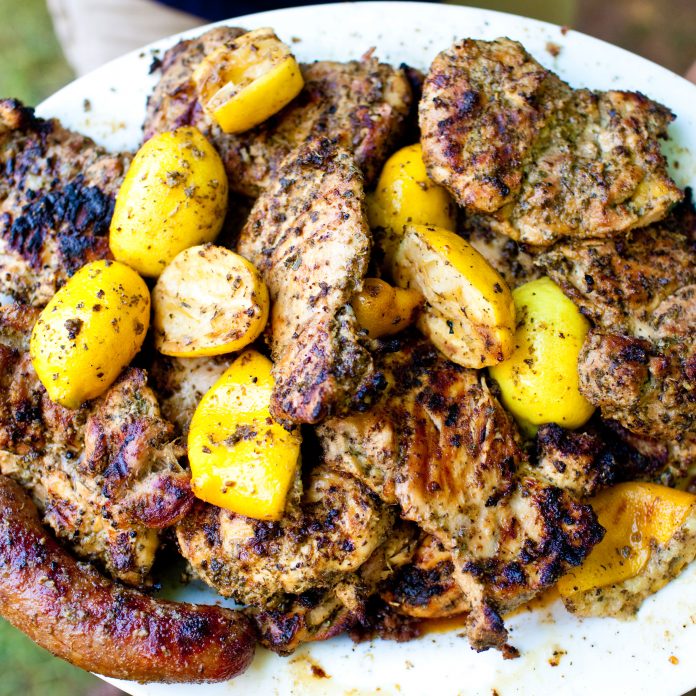 The first time Andrea Koulouris invited me to join her family’s Greek Orthodox Easter celebration, she opened the door at 11:30 a.m. with a glass of white wine in her hand. “Kalo Pascha!” she said. “Happy Easter!” She led me to the backyard. Her husband, Pano, was manning a large spit, seasoning a lamb with olive oil, lemon juice, and oregano as it slowly spun over ashy coals. Men in T-shirts and shorts stood in circles, drinking beer and laughing as they told stories. Pano’s father, Nick Koulouris, who started the local Grecian Gyro chain in 1982, asked me what I’d like to drink and motioned for me to dig into a platter of pita, hummus, and tzatziki, the garlicky yogurt sauce.

I blinked in surprise: Good morning and opa, y’all. On Easter Sundays in my Methodist family, we hunted Easter baskets in my grandparents’ barns, went to church, ate a midday ham dinner with coconut cake for dessert, and then took naps or played board games afterward. But I immediately warmed to this idea of Easter as a full-throttle, all-day party.

To be clear, the events that precede Sunday’s revelry are decidedly more chaste—and they operate on a different time schedule than Protestant and Catholic Christians, who celebrated Easter this year on March 31. For Eastern Orthodox Christians, the holy day doesn’t arrive until May 5. The Orthodox church sets the dates for Easter by the ancient Julian calendar rather than the Gregorian calendar adopted by the Catholic church in 1582.

During Holy Week leading up to Easter Sunday, both sides of Pano and Andrea Koulouris’s family abstain from meat, eating simpler foods such as lentil soup and fish. The Easter service they attend at the Greek Orthodox Cathedral of the Annunciation on Clairmont Road begins late Saturday evening. Near midnight, a priest carries out a white candle signifying the resurrection of Christ, and its flame passes from candle to candle until the church is full of light. This is followed by the Divine Liturgy (known as the Eucharist in Catholicism), which includes communion.

They leave the church around 2 a.m., carrying a lighted candle home to create a cross from its smoke above their front doors as a blessing. The family sups on avgolemono (chicken soup with a lemon-and-egg sauce), one of Andrea’s father’s specialties. Pano heads to the Grecian Gyro’s Tucker location to prep the lamb and then returns home for a few hours’ sleep; he starts roasting the meat at 6 a.m.

Thirty friends and family arrive by the afternoon, many contributing traditional dishes to the feast such as pastitsio (often described as “Greek lasagna”) and fasolakia (green beans stewed in tomatoes). Pano’s mother brings lemony roasted potatoes; his brother, George, makes the tzatziki and the tsoureki, a braided sweet bread baked with an egg dyed red to symbolize Christ’s blood. Others grill chicken and sausage perfumed with lemon and oregano. When Pano and his father pull the lamb off the spit to chop the meat, people gather around and snack on stray morsels, not unlike a Southern pig pickin’. Fathers with greasy hands chase their squealing young children. Everyone lines up to fill plates. Desserts come later and include galaktoboureko (custard pie topped with phyllo), koulourakia (braided butter cookies), and, of course, baklava.

When Andrea greets guests at the door this year, she’ll likely be holding the couple’s first baby, Isabella, born in December. And she’ll be extra glad that the next day is a Greek Orthodox holiday, known as Bright Monday or Renewal Monday. “We would take off that day anyway,” she says. “If not for the religion, then for the rest.”

Photograph by Kendrick Brinson. This article originally appeared in our April 2013 issue. 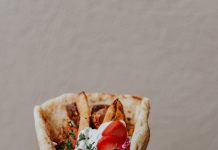 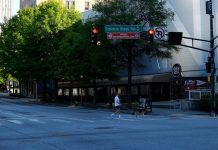 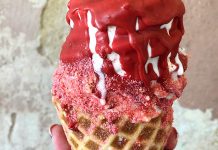 Where to get soft serve ice cream in Atlanta