Fast-food fried chicken joints are as much a part of the Atlanta topography as magnolias and strip malls. Which of them cranks out the best golden bird? To find out, we rounded up meals from three familiar Southern-owned chains: Bojangles’, headquartered in Charlotte, and Church’s and Popeyes, both based out of Atlanta. (Yes, we skipped ubiquitous KFC.) After piles of napkins and debates punctuated by the wagging of greasy fingers, Popeyes emerged the winner—but not by much.

Crunchiness: Flaky crust, but the first to go soggy
Juicy or greasy?: Balanced; didn’t leave our hands too oily, and the meat tasted fresh
Salt/spice level: Midrange saltiness; many surprised by the sneaky heat
And about those biscuits … : Fluffy and tangy from buttermilk; much better hot
Overall satisfaction (on a scale of 1 to 5): 3.25

Crunchiness: The palest coating of the three, yet notably crisp
Juicy or greasy?: The grease bomb of the lot, and the chicken had a mealy texture
Salt/spice level: Bland, though the staff’s gentler palates preferred it
And about those biscuits … : Homey, drop-style shape, though way too sweet
Overall satisfaction (on a scale of 1 to 5): 2.5

Crunchiness: The crunchiest of the bunch, with a rich, russet burnish
Juicy or greasy?: A mixed bag, depending on the piece—white meat dry, dark meat lush
Salt/spice level: Comes either plain or spicy; the latter packs some pep
And about those biscuits … : Dense and pleasing when warm, turned rubbery as they cooled
Overall satisfaction (on a scale of 1 to 5): 3.5

This article originally appeared in the January 2014 issue under the headline “Southern-fried chains.” 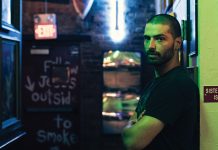 When Dillon Knight says you need to leave Sister Louisa’s Church, you better