David Paull launched Compostwheels in 2012 when he was a sophomore at Savannah College of Art and Design. This year, his company has stepped up its game, taking on commercial clients including Atlanta favorites Cakes & Ale, Little Tart Bakeshop, and Upbeet. The idea: Conserve your food scraps, and Compostwheels will pick them up and turn them into nutrient-rich soil that they then deliver to nearby farms. That means less food waste going to local landfills and more local food production. compostwheels.com 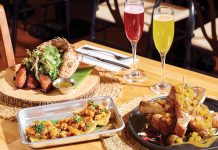