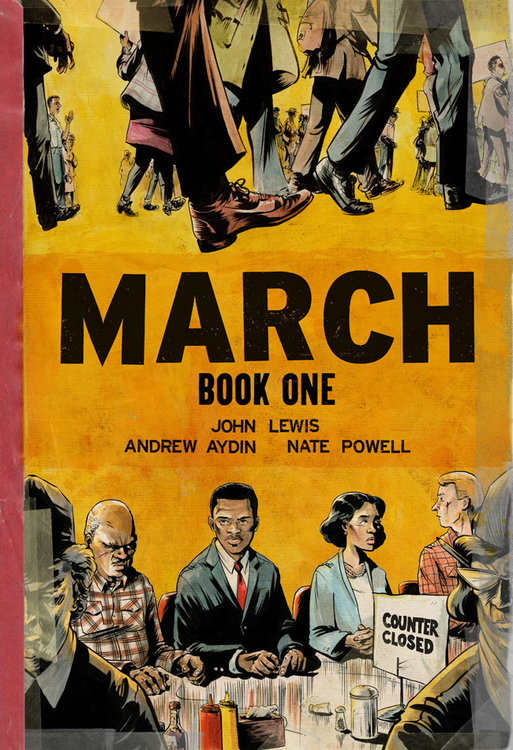 Editor’s Note: Georgia congressman and civil rights legend John Lewis has added another item to his resume: bestselling author. March: Book One, the first volume of his memoir-as-comic trilogy with Marietta-based Top Shelf Productions, grabbed the top spot in its category on the New York Times bestseller list. Lewis, who will deliver the keynote address at the 2013 Decatur Book Festival, is in Washington this week to commemorate the fiftieth anniversary of the March on Washington for Jobs and Freedom; he notably is the only living speaker from the 1963 event.

James: I thought the storytelling was well done; particularly starting with the incident on the Edmund Pettus bridge in Selma, and then using the framing device of the constituents visiting Congressman Lewis’s office in order to allow him to tell his story in flashbacks. The framing and the pacing of the individual panels also work well, reminding me of Will Eisner’s sense of page design.

Rebecca: I also thought that starting with the “Bloody Sunday” incident in Selma—arguably the most influential event in Lewis’s long career—was effective. However, given that the goal of the book is to reach a wide audience that may not be familiar with the congressman’s past, I wish there were a few more details in those opening pages (and throughout the book). The section could at least include the word Selma, or a date, for example. I agree that the visitors in D.C. make a good framing device for Lewis’s recollections, but again, wish there were a few more details. There’s a date given, which the careful reader will realize is President Obama’s 2009 inauguration, but it’s not something the casual reader will pick up on right away. Lewis’s co-author Andrew Aydin would have done well to help the congressman fill in some facts to help the reader along the way; there’s an assumption that the reader will connect an awful lot of dots.

James: I was happy to see this drawn in gray tones. So many comics are over-colorized nowadays, and it was refreshing to see this one done so simply and clearly. All the artifice is stripped away so the story can shine through.

Rebecca: I love the evocative drawing in the section on Lewis’s childhood, especially the stories about his early connection to the chickens he had to care for. The depiction of the aspiring young preacher practicing sermons on this “flock” is priceless. His Alabama roots are effectively and quickly conveyed. The story about traveling north, and not being able to stop to eat or use the restroom, conveys the realities of the Jim Crow South in a manner that should be very vivid for younger readers.

The comic also swiftly and effectively traces the connection between Lewis and Martin Luther King, Jr., showing how the older man served as a mentor and inspiration. It also, subtly but confidently, underscores the crucial role that the student movement, with Lewis as its leader, played in the civil rights movement. The student sit-ins, Freedom Rides, and voter registration efforts are vital elements of that history, and far too often overshadowed by the familiar stories of Rosa Parks and King’s “Dream” speech. That said, a few more details and notes would make the comic even more effective as a history teaching aid: Thurgood Marshall is mentioned in passing; Hosea Williams referred to by first name only.

James: For me, the only thing that really took away from the story was artist Nate Powell’s depiction of the congressman’s face, particularly in the current day. I’ve seen him in person, multiple times, and his head is much more bullet-shaped. Also, in person, he conveys a vitality and strength that does not come through in the comic. In some of the flashback scenes he looks more like the younger Andrew Young than pictures I’ve seen of Congressman Lewis from back then. It’s a little visually confusing. That said, as an artist I constantly struggle to achieve likenesses, so I hesitate to gripe about another’s work.

Rebecca: I agree about the likenesses, particularly of present-day Lewis. Another thing I found distracting, (and maybe it’s just because I don’t read many comics) was the use of scrawled, bewilderingly faint, type to indicate background noise and crowd commentary. That type should have been as clear and easy-to-read as the rest of the text—or cut completely.

James: Yeah, that bugged me too. Being a geezer, I strained my eyes trying to read that type.

Rebecca: But those quibbles aside, I think this is an important book that will introduce Lewis and some of the lesser-known aspects of the civil rights movement to an entirely new audience. This first volume just goes through the early 1960s sit-ins. I’m eager to read the next two volumes and see how they cover a half century of this inspiring man’s life.

Lewis will give the keynote speech for the Decatur Book Festival this Friday at 8 p.m. in the Schwartz Center at Emory University. For information, decaturbookfestival.com