I’m looking for work after being laid off from a hotel management position. I know job hunting doesn’t work the way it used to, but do I need to be on Instagram, Twitter, and other platforms used by my college-age daughter? At forty-seven, the last thing I want to do is tweet or post photos of my lunch.
Sincerely, Socially Unsavvy

Dear Unsavvy: Indeed, the new age of job hunting can be #confusing—even more so for those of us who refer to the # symbol as a “pound sign,” not a “hashtag.” (Don’t know what a hashtag is? Consult your kid.) But the times have changed, and being on these platforms shows you’re with the times. That said, using social media is neither difficult nor trivial. Hallie Crawford, an Atlanta-based certified career coach, says it’s better to have a complete and engaging profile on just one platform than to dip your toes in several. In other words: No need to show us your turkey sandwich.

Instead, try LinkedIn, the most career-focused social media site. “LinkedIn is great because recruiters are there actively searching, and you can also look at profiles of people who have jobs you want,” Crawford says. “You can see what you might need to be competitive.” Alternately, create a one-page website (Weebly and WordPress allow you to do this for free) with a two-paragraph description of your skills and goals. “Employers enter your name into Google whether you like it or not,” says Barrett Brooks, founder of the career blog Living for Monday. “It’s better to be proactive—to show you’re relevant while you are job searching.”

The lack of opportunity for growth at my current gig has me itching for a switch. I’ve seen a lot of listings I’m interested in but don’t want to waste my time pursuing a position that will mean a pay cut. When’s an appropriate time to ask about money?
Best, Desperately Seeking a Raise

Dear Desperately Seeking: Thanks for the candor! We know everyone’s wondering the same thing. Continue this directness—with friends, family, and anyone else not interviewing you for a job. We know that’s tough to hear. But if you ask about salary too early in the process, it’s sure to send the wrong message to a potential employer, says Brooks, who brings up another good point: If salary is your foremost concern, it pays to research using sites like Payscale.com as a guide. Hold the salary question until the end, when you’ve been offered the gig or sense some sort of commitment from the employer. As the saying goes: Timing is everything.

I’m eighteen and headed to college this fall. I’m already freaked out about the job market. It seems like for all of the general economic recovery since the 2008 collapse, it’s still totally difficult to find a good job. Since I’m not married to any career path, I’m curious to know if there are any money-making majors I should consider?
Best, Young and Restless

Dear Young: What a thoughtful, mature question to ask at eighteen. But in this situation, it’s best to indulge in your youth and give yourself a little time to free-fall. “When you’re going into college, you shouldn’t be thinking about what’s going to make you money, but what’s going to be good for you as a person,” says Debbie Brown, president of Atlanta-based D&B Consulting. “I work with a lot of executives who went into a particular field because they thought it’d be lucrative, and now they’re miserable.”

That said, if you don’t have strong preferences as you start college, there’s no need to lock in a major with limited prospects. (Sorry, but poetry isn’t known for paying the bills.) Instead, Brown recommends researching fields with options for growth. And if you want to stick near Atlanta, those would include healthcare technology or tech in general.

It seems like coding is all the rage these days. From nonprofits like Girls Who Code to the software engineer who offered to teach a homeless man coding, everyone seems to be in on the trend. I work in marketing and saw an article recently that suggested I might need to learn how to code as well. What’s the deal? Do I really need to know how to code to get a job these days?
Sincerely, Right-Brained Wordsmith

Dear Right-Brained: You should know better than to just follow trends! Particularly this one, which seems impractical at best. There’s no denying that computer coding is an excellent skill to have—especially if you want to work in the technology or engineering industries. But for people working in journalism, marketing, or PR, we can think of far more beneficial skills: Spanish and WordPress come to mind first. If you’re still worried you may be left behind, Crawford suggests browsing LinkedIn to see if peers in your field have any skills you may need to obtain or brush up on to be competitive in your industry. Or asking recruiters directly whether it’s worth your time. Don’t just take a coding class out of peer pressure.

As Brown puts it, “Nothing’s a good skill if you don’t want to do that job.” 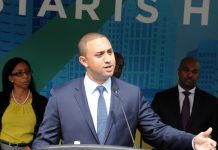 How Atlanta’s most dysfunctional city agency turned its act around

Where the Jobs Will Be