A Twitter exchange last week on the topic of barbecue roused my appetite. I just checked out three spots that were “new” in a fluid sense of the word—Fox Bros. Bar-B-Q is new to me, since it opened in 2007 during my three-year absence; D.B.A. Barbecue has been open almost five weeks; and Rolling Bones BBQ has been under new ownership since June 15.

One clearly won out over the others. Here’s my report:

(NOTE: Our blog server is wonky at the moment. It should be fixed within 24 hours, apologies for any off-kilter aesthetics.)

Fox Bros. Bar-B-Q
Fox Bros. has generated buzzy word-of-mouth around town. Jonathan and Justin Fox hail from Fort Worth, a town where you can find some luscious beef brisket (hi, Angelo’s), particularly if you ask for “moist”—i.e., a fattier cut. So a friend and I arrived at Fox Bros. at 12:45 pm on weekday to find the parking lot and the restaurant filled to capacity. A promising sign? The wait wasn’t long, and I ordered the three-meat combo “BC Plate” with pulled pork, beef brisket, and smoked chicken. Bottom line: Each protein was decently juicy, but none were infused with enough come-hither smokiness for my taste. The pink-tinged edges showed care with the smoking technique, but I wanted more oomph to the flavor. We did get a take-out order of baby back ribs, which we tore into the moment we reached the car, and they were better permeated with smoke. If I were return to Fox Bros. and wanted classic barbecue, I’d order the ribs again. And on the side, I’d ask for the Tomminator—tater tots smothered with Brunswick Stew with a slick of yellow cheese melted atop. That conglomeration tasted way more compelling than it should, and even a half-order was massive: I had to push it to the edge of the table to keep myself from shifting into compulsive-eating overdrive.

D.B.A. Barbecue
Matt Coggin, managing partner of D.B.A., walks by our table and notices how little has been eaten of my three-meat combo plate. He nods specifically toward the beef brisket, then says to me, “That looks dry.”

When the bill comes, Coggin has taken my $18 plate off the tab. I protest and he says, “Listen, it wasn’t right. I don’t want you to pay for it.” I concede. And so my visit corroborated the reports and mentions I’d previously read or heard: D.B.A. needs work. The place is doing some fairly steady business early in its run—I think the Va-Hi/Morningside neighbors want so badly to have a restaurant in this space (formerly Vine and Tiburon Grille) that sticks around and succeeds at D.B.A.’s affordable prices. And locals probably recognize Coggin from his longtime stint managing Sala across the driveway.

But someone in his kitchen needs to learn how to make barbecue. Not only was the meat dry, it possessed zero character from the smoker. That goes for the baby back ribs, the pulled pork, and the sad “Texas” beef brisket. (Texans would have some particularly untoward remarks for that brisket.) Only the smoked tofu gave off a slight whiff of campfire: Too bad its flabby texture marred its enjoyment.

The Brunswick stew and collards did show signs of skill, so for now I’d order an $11 plate of sides and drown my disappointments in either an Abita beer or a cocktail.

Rolling Bones
I wanted smoky, I got smoky. So did my shirt, which still reeked of barbecue even when I took it off at the end of the day.

That’s more caveat than complaint. Chef Todd Richards and his Lush Life group partners, who run One Flew South in the international terminal of Hartsfield-Jackson airport, took over the deco-gas-station-turned-rib-joint on Edgewood that’s been operating since 2003. They launched a new menu—not yet online—on June 15, keeping some of the signature touches (“mild” or “hot” as the two sauce choices; mustard greens as a side dish), but the meats they’re slicing and chopping are a marked upgrade from the serviceable but inconsistent product of the previous owners.

They’ve blown out the protein options: duck, turkey, trout, salmon, catfish, and a BLT made with—what else?—Benton’s bacon. I like the novelty of the duck, and it has a pleasantly dense texture and is served with dried figs. But, when it comes to barbecue, I’m in it for the pork and the beef.

And the chopped pork shoulder—moist, with blackened bits and fatty blips and chopped into satisfying hunks—may be the best barbecue I’ve ever had ITP. I hate even saying that, because most barbecue restaurants are inconsistent, and someone may well go and report back that it was dry and miserable, and I’ll believe them. But I’ve been twice and that pork sang a soulful hymn of smoke and fire both times. And the beef brisket was right behind it. One suggestion: Ask for the sauce on the side. The tomatoey sauce is, blessedly, not overly sweet, but this meat should be experienced nekkid before it’s slaked with sauce.

Richards and crew also decided to serve beef sausages from the heralded Southside Market in Elgin, Texas. (Different parts of Texas are known for different specialties, and the Elgin area, with its German-transplant heritage, loves its hot sausage). The cook behind Rolling Bones’ streamlined metal counter will slice the sausages into bite-sized pieces, and these suckers shimmer with grease. A few bites are probably all you can stomach, it’s a share item.

Which reminds me: The portions are mammoth, so prepare for leftovers.

Oh, and those mustard greens, silky and sharp with pork, are heavenly. The potato salad with bacon needs tinkering still, it’s a little oily and grainy. The peach cobbler topping loses its mojo inside a plastic container. And I’m not the first person to question whether those battered fries are indeed “house cut” as the menu advertises.

But these are small quibbles. If you’re craving barbecue, go—now. Barbecue euphoria can be heartbreakingly fleeting, so check out Rolling Bones while the smokiness is at its most intoxicating.

Recommendations for barbecue ITP or OTP? I’m always on the lookout. Can’t wait for Dave Roberts, ex of Sam and Dave’s BBQ1 and BBQ2, to open his new ‘cue spot in the old Epicurean locale on Clairmont in Decatur. And Roswell’s Swallow at the Hollow is a perennial fave. Comment below or email me at BAddison@atlantamag.emmis.com. 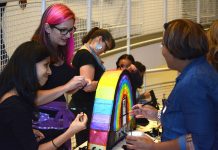