Home Uncategorized Could you wait tables for 45 years?

No kid dreams of waiting tables when he grows up. At least, that’s what we learned from five of our city’s veteran servers, who’ve each spent 20 to 45 years taking orders, filling glasses, and brushing crumbs from tables. So what makes someone stick with this job for their entire life?

We found that some enjoy the flexibility; others just like to chat with customers. Then there’s the money. Nearly all of the servers we interviewed are employed at steakhouses, where customers’ checks often reach hundreds or even thousands of dollars. Bones Restaurant, for example, employs 25 servers, 15 of whom have been there for at least a decade. That loyalty goes both ways: Ali Zarbashi works just 28 hours a week and receives generous benefits that include profit-sharing and five weeks of paid vacation—a perk of staying for 35 years.

Not everyone is so cozy. While we were producing this story, one server lost her job when her employer abruptly shut its doors (Simonia Porter at now-defunct Ocean Prime). Another, Todd Hayes, left Restaurant Eugene for a more lucrative position at Kevin Rathbun Steak. It’s a reminder of just how unusual these five are, given the often transient nature of the work and how tough it can be to make it last.

I never intended to be serving for this long, but this is easy work for me. For a long time, I didn’t see it as a career. I kept thinking, I’ll get a real job someday—but I still don’t really know what that means. I have a GED and a DUI, and yet I own three motorcycles, a truck, and a house; and my wife, who works as a consultant, drives a BMW. We’re doing good!

Growing up, I didn’t want to wake up at seven o’clock in the morning. I’m not an office guy, a shirt-and-tie guy. I don’t like the phone. Even as a waiter, I’m not Good evening, sir. How are you this evening? I’m What’s up, man? How ya doin’? What can I get you? Is it drinky time? At least with me, people go for that no-bullshit thing. You don’t have to give hand jobs at every table. People just want you to be real with them.

Fine dining isn’t what it used to be. To some extent, I miss the old days. You felt important because you were knowledgeable. These days you’re just there to hand them food and take away their plates. Waiters used to dress in full regalia. I don’t think it was stuffy. I feel good when I dress up, for heaven’s sake. I like wearing a coat and tie when I go out to dinner because I feel like I’m somebody.

I kind of fell into waiting tables. I just needed a job. But now that I’ve been doing it for so long, you start to wonder if you can do anything else. After 45 years, I’m getting to the point that I’m ready to retire. My partner and I are going to move to Ecuador. Two people can live on $1,200 to $1,400 a month and have a maid. I think we’ll just take the maid money and buy some margaritas.

In 1995, when I was 23, I almost enrolled at the University of Alabama in Huntsville to get an undergraduate degree in physics. But having money in my pocket in my mid-20s and doing what I wanted to do, it was a bit of a veil. Back then, Buckhead was a lot of fun. But now I wish I had gone back to school. I didn’t realize how much weight a degree would carry.

Still, I love to take care of people. But then there are customers who ask, “So what else do you do?” It’s insulting, but I also think, Do I want to be a 55- or 60-year-old waiter? Is that all I want? People don’t realize that servers don’t keep all their tips; a portion of it goes to bartenders, sommeliers. After you take out taxes, ask yourself if you can raise a family on that.

The schedule is tough; we work Easter, Mother’s Day, Christmas Eve. So I’ve been working on a plan to open my own specialty food market in the next three years. We’ll have wine, cheese, meats, pastas, soups, and other prepared foods. I figure if I can become my own boss, I can have a family, a more stable life.

I  think my mother is still mad that I didn’t finish college. I only had a year left. Then Ford Motor Company closed their Michigan plant in 1984 and relocated everybody to Atlanta. I wanted to move with my auntie to have a fresh start. I don’t regret it. I’m married with a son, and I love my job. It’s fun.

I waited on a lot of celebrities at Ocean Prime. Frankie Beverly came in all the time with his family, and he always asked for me. I grew up on his music. Gabrielle Union, Kevin Garnett, Shaq, Young Jeezy, T.I.—I’ve got pictures with them all. In 2006, a big restaurant in Detroit where I used to work flew me up to wait tables the night of the Super Bowl. I waited on Peyton, Eli, and Archie Manning, even Jerome Bettis from the Pittsburgh Steelers. He was big in Detroit! I called my mom and told her, Dreams do come true.

I emigrated here from Iran on a student visa in 1978. Two years later I started full time at Bones. I’ve grown up in this place. And Bones has been very good to me. Servers here get family health insurance, a 401(k), even profit sharing. For my 10th anniversary, the owners gave me a Rolex.

We say here that you’re always one table away from your best night ever. One night, a table for three spent $3,000 and left a $1,000 tip. And there’s so much flexibility that you don’t get in a 9-to-5 job. You want to make more? Work another shift. You want a break? Give up a shift. I’ve got three kids, triplets, and I want to be with my family as much as I can. When I’m home, I cook. My kids call me “Chef Daddy.” Hopefully I’ll retire in four years when I’m 66. You can only do this for so long before your body says, That’s enough.

This article originally appeared in our November 2015 issue under the headline “At Your Service.” 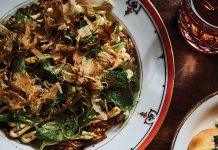