The Buckhead Life Restaurant Group has been a city-wide force since its first restaurant, Pano’s & Paul’s, debuted in 1979. Fewer dishes reflect that long history than the warm Maytag blue cheese chips offered at Buckhead Diner, which opened in 1987. “It’s a crowd pleaser,” said Pano Karatassos, founder of Buckhead Life. “It’s something you can put in the middle of a table and everybody goes for it.”

Before opening the restaurant, Karatassos looked for an interesting way to serve the diner’s potato chips. While visiting Scoozi’s in Chicago, he stumbled across a plate of sauteed potatoes covered with melted gorgonzola cheese. “Right then and there, it hit me that this was something we could certainly do,” Karatassos said.

He brought the idea back to Atlanta and spent nearly six months fine tuning the recipe, experimenting with different frying techniques and the thickness of the potato chips. He wanted the lightly-salted chips to stay crisp, even under the weight of the creamy, pleasingly-funky blue cheese. When he settled on his recipe, the dish was an immediate hit.

Today, the diner serves more than 230 orders of chips every week. Over the course of a year, customers eat hundreds of pounds of potatoes and over 120 pounds of Maytag blue cheese. Karatassos says he’s seen the dish replicated across the city and country, but he doesn’t mind. “There’s a sense of satisfaction and pride when others copy what you did.” 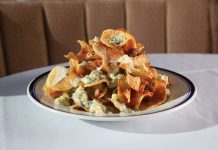 I don’t even like snacking at home—why should I at a restaurant? 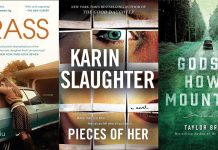